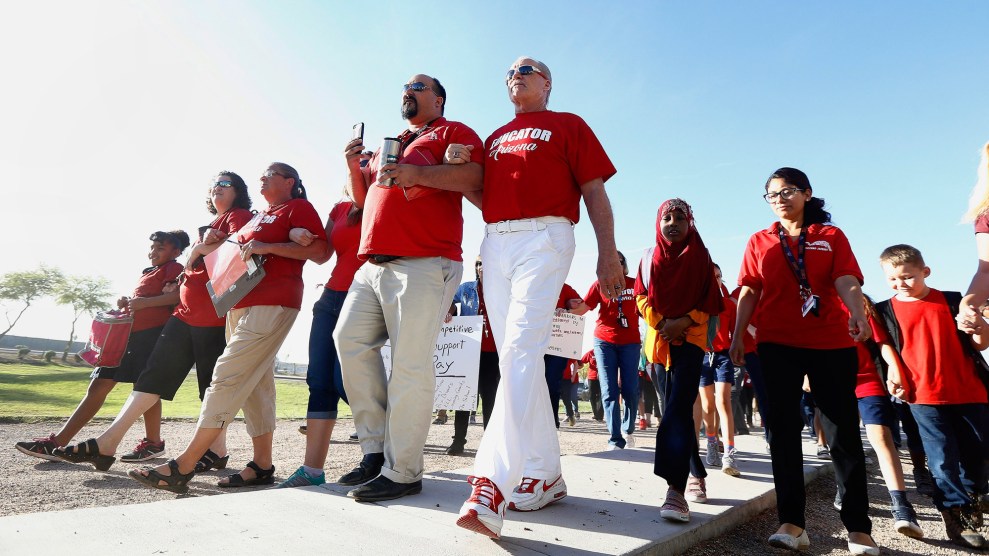 Teachers at Tuscano Elementary School stage a "walk-in" for higher pay and school funding as they walk into school on Wednesday in Phoenix.Ross D. Franklin/AP

On Thursday night, just a day after thousands of Arizona teachers staged “walk-ins” at their schools to call for better pay and school funding, Republican Gov. Doug Ducey proposed giving teachers a 20 percent raise by 2020.

Under Ducey’s plan, teacher pay would increase 9 percent this year, followed by a 5 percent raise for each of the next two years. The move represents a huge concession from Ducey—but Arizona educators say it’s simply not enough.

At the state capitol in late March, leaders of the group Arizona Educators United demanded not only a 20 percent increase in base pay and competitive pay for educational support professionals but also a restoration of education funding cut since 2008—a move that would cost the state $1 billion. The group called for lawmakers to pause new tax cuts until that funding is restored.

“To me right now, [Ducey’s proposal] feels like this was essentially an attempt to stop whatever actions we may have been taking, instead of a legitimate groundwork for future investment in education and to fulfill our demands,” Noah Karvelis, a music teacher and Arizona Educators United leader, said in a Facebook video on the Arizona Education Association page with other organizers on Thursday.

Since 2008, Arizona lawmakers have slashed nearly 37 percent of total state funding for schools, adjusted for inflation.

The call to restore education funding to earlier levels echoes similar demands from educators in Oklahoma and Kentucky, who have recently protested the deep cuts to education funding that resulted from sweeping tax cuts over the last decade. Since 2008, Arizona lawmakers have slashed nearly 37 percent of total state funding for schools, adjusted for inflation, according to the Center on Budget and Policy Priorities. At the same time, Arizona also has either cut or reduced income and corporate taxes, further squeezing education budgets. Arizona teachers make $48,372 a year on average, among the lowest in the country.

The grassroots group of Arizona educators has raised the possibility of a walkout like those in Oklahoma and West Virginia, where a nine-day strike resulted in a 5 percent pay raise. On Thursday, after thousands of Oklahoma teachers flooded the capitol to demand more school funding for almost two weeks, union leader Alicia Priest called for an end to the teacher walkout, conceding to reporters on Thursday night that the teachers’ demands wouldn’t be satisfied after seeing “no significant legislative movement” since the walkout began. Meanwhile, in Kentucky, thousands of teachers stormed the state capitol to call for adequate school funding and rally against a recently passed pension reform bill.

Ducey, who is up for reelection this year, had previously refused to meet with teacher organizers from the #RedForEd movement, telling a local radio show: “What I don’t want to do is get into these political operatives’ political circus.” On Thursday night, the group’s organizers called for more details for how Ducey’s proposal would be funded. “He took a shot at one demand, and he missed that,” Karvelis said on Facebook. “We have four others that he hasn’t even touched upon.”