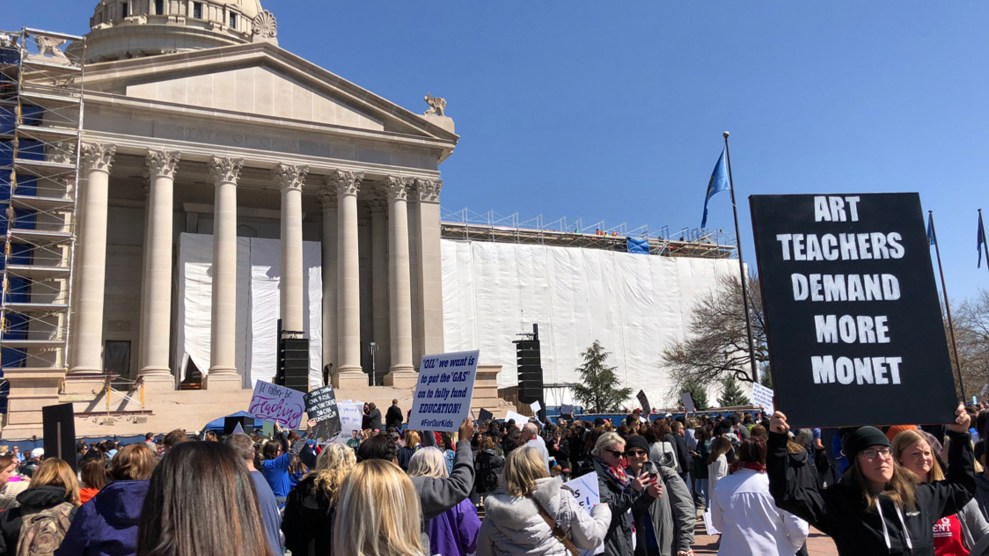 On stage Wednesday before the steps of the Oklahoma state Capitol building, in front of thousands of teachers, parents, and kids like them, 14 students from schools surrounding Oklahoma City took the stage to demand a better life for them and their teachers.

Landen Brumley, a sixth-grader from Newcastle, spoke of tattered textbooks with pages falling off at the seams and of classrooms filled with 30 students. Alexis Broderick, a senior at Midwest City High School, wanted a future for her younger sister where she could roam through halls free of black mold and sit in desks that won’t tear her jeans. Cameron Olbert, who attends the Classen School of Advanced Studies in Oklahoma City, told the crowd, “Our teachers are here because they’re dedicated professionals who demand fairness. Our teachers are here because they don’t want to sell their blood to make ends meet. Teachers don’t want to have to go to food banks just to feed their families.”

“In a perfect world,” Ravi Patel, a senior at Southmore High School, said, “no teacher should have to fight day in and day out for an adequate salary to protect their own children and their students within the classroom.”

It was these kids’ momentum that came to forefront Wednesday in what’s previously been a largely teacher-driven movement in Oklahoma to protest for better education funding. As lines wrapped around sidewalks just to enter the Capitol where the state legislature would soon be debating education-funding measures, the scene was reminiscent of months of student-led activism on gun control driven by the students and survivors of Parkland. And that was in some ways by design. For hours, student after student took to the stage, speaking with emotion and frustration, to capture the range of experiences in schools from Bethany to Oklahoma City.

Many schools were shut down for the fourth consecutive day Thursday, as frustrated citizens, educators, and parents alike have taken over the rafters of the Capitol building, peering over legislators as they demand more school funding on top of the $50 million Gov. Mary Fallin approved last week—a figure far short of the $200 million over three years teachers have asked for. Last week’s bill raised teacher salaries, on average, by $6,100 through tax increases, still less than the $10,000 over three years Oklahoma teachers have called for. Lawmakers are now considering other proposals to bring in more revenue, from opening up ball and dice games at Indian casinos to allowing third-party vendors who sell products on Amazon and other online retailers to collect a sales tax that would bring in an estimated $20 million earmarked for education. House Democrats have tried and failed (so far) to push a capital gains tax exemption that would bring in roughly $120 million.

The push has been one based predominately on teacher anger and action, similar to the recent strike in West Virginia, but that shifted Wednesday, in large part because of Gabrielle Davis. Just a few days ago, the senior at Edmond Memorial High School had been beside her peers and teachers in front of the Capitol building taking an AP English class. Throughout the day she heard from some students who were interested in getting more involved, perhaps even in speaking. So Davis created a Facebook group Monday night called Student Voices for Education, which quickly gained hundreds of members in less than two days. From there, she asked students to send her speech drafts if they wanted to speak at a rally Wednesday, and by Tuesday night, she received dozens of submissions.

Davis, who is Mexican and Native American and part of her school’s Young Democrats club, tells Mother Jones that, as she grew up, she encountered bullying “for my skin color,” which pushed her into social activism. When Davis was in middle school, she rode the bus to school from the outskirts of Edmond, a city 14 miles from Oklahoma City, and encountered racist remarks and name-calling. When it turned particularly bad, she recalls turning to her orchestra teacher, David Koehn, for guidance. “Teachers do a lot more than just teach you arithmetic,” Davis says. “They teach you how to care about yourself and others.”

So when Parkland students called for a school walkout across the country in March, Davis knew she had to act. She and her classmates marched to the football field and stood in silence for 17 minutes, one for each person who died in Parkland. Afterward, Davis was the one to read the names of the victims. “Emma Gonzalez is everything I would like to be,” Davis told me. “When [the Parkland students] spoke up and they were brave enough to stand up, it inspired our generation. They can do it. They are enacting change. People are listening to them. Why haven’t we been speaking up? Why haven’t people been listening to us?”

Davis says that her school has been hurt by funding restrictions, noting that she had a teacher leave her school for neighboring Texas—a problem plaguing other schools across the state as well. “We have incredible teachers but we still have broken desks and 38 kids in a class and a lack of science materials. And Edmond is a fairly an affluent community. It makes you very concerned for the inner city and more rural areas,” she says. “If an affluent community is having a hard time, how bad could it be for the already disadvantaged?”

Davis says she hadn’t met the students who spoke at Wednesday’s event before that day, but noticed that many of their frustrations were very similar. “We’re pressured as teenagers to make our communities proud,” she says. “But how can we if we are not given the chance—or the tools?”

The Parkland-inspired activism isn’t limited to Davis. Nearly two weeks ago, Patel, the senior at Southmore High School, stepped up and spoke at the March for Our Lives rally against gun violence in Oklahoma City. On Wednesday, Patel, whose family emigrated to the United States more than two decades ago, talked about how for four years he studied in India, and when he returned to the states, he imagined an education “where he could study arts and humanities while studying science and mathematics.” It opened his eyes to just how underfunded schools Oklahoma are. He says he has family members who live in districts that don’t have enough money where students grapple with “generational poverty that you usually see in developing nations that you shouldn’t be able to see in the United States.”

Looking ahead, Patel says he wants to encourage younger students to register to vote, hoping they were finding the booths set up in front of Capitol to register people to vote. “A lot of times, teenagers feel like they feel like they don’t have a voice, even though some of these issues blatantly affect them. Just because you can’t vote doesn’t mean you can’t voice your opinion,” Patel says. “We want to put people in office that are going to represent us the best.”

Davis, like other students who spoke on Wednesday, wore white T-shirts bearing the date they turn 18 and the names of the legislators who represented their district on their backs.

“There’s a lot of misconceptions about my generation not being active in politics. The shirts were to let people know we know what is going on,” Davis says. “We’re looking at their voting record right now. We will be voting them out of office if they refuse to support us.

“With each day, the movement gets stronger,” Davis tells Mother Jones.