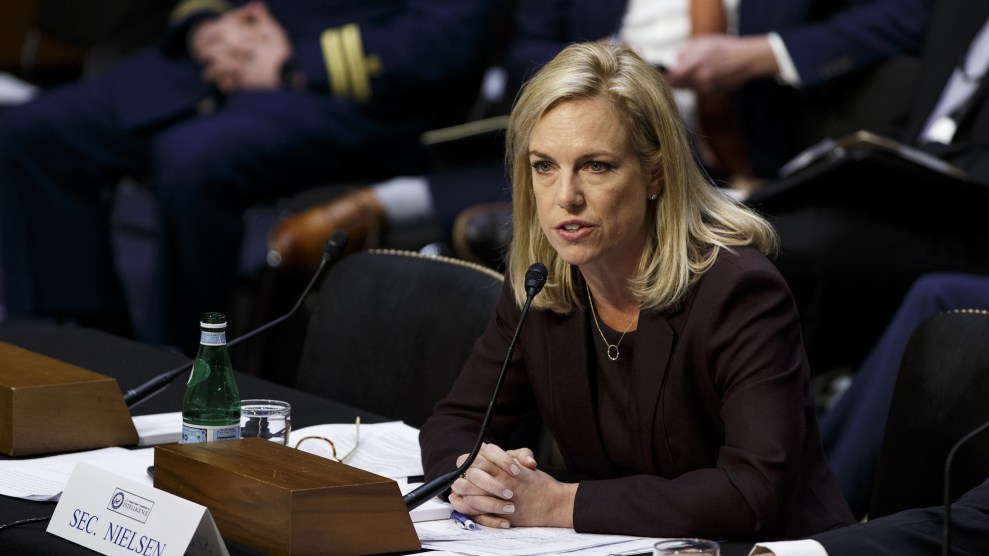 Homeland Security Secretary Kirstjen Nielsen insists the Trump Administration is working hard to stop Russian interference in future elections, but lawmakers in both parties are questioning whether the efforts can succeed under a chief executive who dismisses the danger.

“I hear no sense of urgency to really get on top of this issue,” Sen. Susan Collins (R-Maine) told Nielsen Wednesday during a Senate intelligence committee hearing. Sen. Mark Warner (D-Va.), the top Democrat on the panel, ripped President Donald Trump for failing to “even bring up the topic of our election security” during a controversial call Tuesday in which Trump congratulated Russian President Vladimir Putin on winning an election that is widely seen as illegitimate. “We need a president who will acknowledge the gravity of this threat,” Warner said.

“We need a president who will acknowledge the gravity of this threat.”

Trump has refused accept an intelligence community conclusion that the Russians interfered in the 2016 contest in an effort to help him win. He has derided claims of Russian meddling as “a hoax.” But Nielsen offered a different take on Trump’s claims. “I think the line that he’s drawn is no votes were changed,” she said. She said she has the support she needs from the White House on election security.

Intelligence agencies have concluded Russian hackers probed voters files and related systems in at least 21 states in 2016 and penetrated voter rolls in one state, Illinois. Several senators and Nielsen noted Wednesday that no evidence has emerged showing votes were changed. However, few states have audited their election results—many lack the capability—leaving them unable to conclusively rule out the possibility.

Intelligence committee members on Tuesday issued recommendations that include a call for states to use paper ballots or voting machines that generate paper trails, and to disconnect voting systems from the internet to make hacking harder. The panel plans to issue a more comprehensive election security report in the coming weeks.

States have faulted the Homeland Security Department for sharing limited information about Russian hacking efforts in 2016, in part because state officials lacked security clearances that allowed them to receive confidential information. Some states complained that the federal government took nearly a year to inform them their systems had been targeted.

Several senators urged the department to publicly name states that have their systems hacked or scanned, reversing its current policy. Nielsen pushed back, arguing that identifying states would endanger their voluntary cooperation with her department. “When victims stop reporting, we’re just not aware of the attacks,” she said.