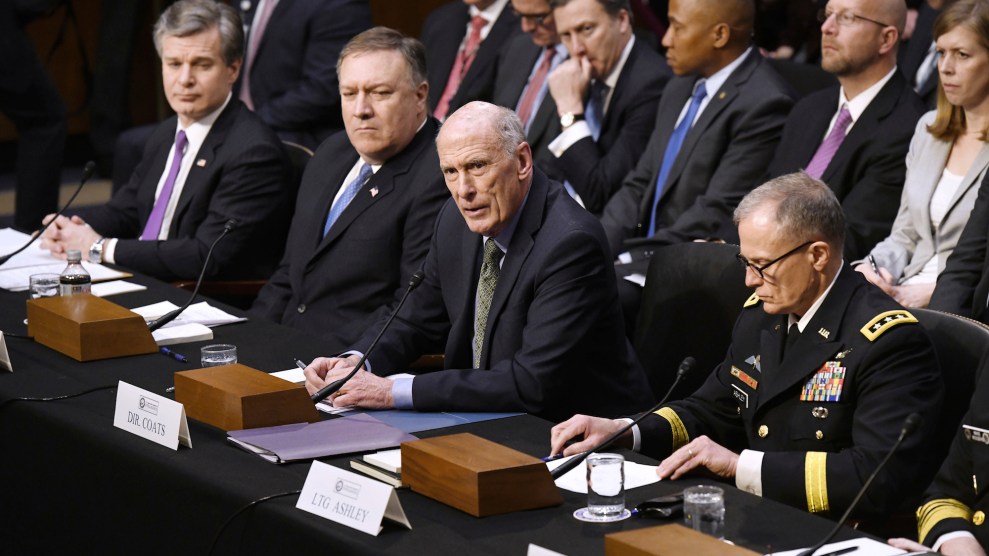 The government’s top intelligence officials say Russia will likely reprise its election meddling in the upcoming midterms—and that President Donald Trump has not told them to take any specific action to stop Kremlin interference.

This striking testimony came on Tuesday during a Senate Intelligence Committee hearing featuring the heads of the CIA, the FBI, and the National Security Agency, along with the director of national intelligence.

Sen. Jack Reed (D-R.I.) appeared to surprise the witnesses by asking if Trump had specifically urged them to address the Russian threat.

“I can’t say I’ve been specifically directed to blunt or actually stop” Russian influence efforts, NSA Director Mike Rogers replied. Rogers added that he considers it his agency’s job to gather intelligence for policymakers rather than act on it.

CIA Director Mike Pompeo, appearing eager to defend Trump, said the president has generally asked the intelligence community to address threats, adding that the CIA takes “all kinds of steps to disrupt what the Russians are trying to do.” But he did not say that Trump has specifically directed the agency to prevent Russian interference.

FBI Director Christopher Wray said he has not been “specifically directed by the president” to combat Russian meddling. Dan Coats, the director of national intelligence, similarly said Trump has not urged him to address Russian meddling. Nor has Trump pressed for any interagency effort to combat Russian interference, Coats conceded. “We essentially are relying on the investigations that are underway,” he said.

That passivity contrasted with the intelligence chiefs’ unanimous and unqualified warnings about Russian intentions in the midterms. Coats, Pompeo, Rogers, and Wray said they stand by a January 2017 intelligence community assessment that concluded Russia interfered in the 2016 presidential election in an effort to help Trump win, and they agreed that Russia hopes to interfere again in the 2018 elections.

“There should be no doubt that Russia perceives its past efforts as successful and views the 2018 US midterm elections as a potential target for Russian influence operations,” Coats said. He added, “We need to inform the American public that this is real. We are not going to allow some Russian to tell us how we’re going to vote. There needs to be a national cry for that.”

But Sen. Angus King, a Maine independent who caucuses with Democrats, argued that Trump’s refusal to acknowledge Russia’s role in 2016 makes collective federal action impossible. King urged the witnesses to push Trump to separate his sensitivity to claims that his campaign colluded with the Russian government during the election from the issue of ongoing Russian interference.

Asked about Trump’s claims that the FBI is biased against him, Director Christopher Wray said he urges bureau agents to tune out criticism.

“We cannot confront this threat, which [requires] whole of government response, when the leader of the government continues to deny that it exists,” King said.

During the hearing, Rogers and Wray told senators that they had disagreed with Trump’s decision to release a controversial memo written by staff for House Intelligence Committee Chairman Devin Nunes (R-Calif.). The Nunes memo accuses the FBI of improperly using research by former British intelligence officer Christopher Steele in an application for a Foreign Intelligence Surveillance Court warrant to monitor a Trump campaign aide suspected of acting as a Russian intelligence agent.

“We had grave concerns about that memo’s release,” Wray said.

Wray also distanced himself from Trump on other issues. The FBI director said he refuses to discuss investigations into the Trump campaign’s suspected collusion with Russia with Trump. And when he was asked about Trump’s claims that the FBI is biased against him, Wray said he urges bureau agents to tune out criticism. “I encourage our people not to get too caught up on what I consider the noise on TV and on social media,” he said.

Wray seemed to derail a line of questioning by Sen. Tom Cotton (R-Ark.), an avid Trump defender. Cotton asked Wray if he agrees with former FBI Director James Comey’s public description of Steele’s findings as “salacious and unverified,” and he appeared to expect agreement. But Wray declined to say whether that remains the bureau’s assessment. “That’s something we can discuss more in a closed setting,” he said. Cotton then dropped the subject.

The Intelligence Committee chairman, Richard Burr (R-N.C.), said as the hearing ended that he hopes to conclude parts of his panel’s probe fairly soon. Burr said he wants to make public his committee’s findings on Russian efforts to disrupt the US electoral process and to hold a public hearing on the topic. He said the committee will also aim to quickly wrap up a review of the intelligence community’s January 2017 assessment. Burr did not specify the timing of those planned reports but said he hopes to release them prior to primary elections to select nominees for the midterms. The earliest primaries, in states such as Illinois and Texas, will come next month, though many occur in July and August.

Burr left unclear when the committee will complete the most closely watched piece of its probe concerning possible coordination between the Trump campaign and Russia. “We will continue to work toward conclusions related to any cooperation or collusion by any individual, campaign, or company to influence the election or create societal chaos in the United States,” he said.