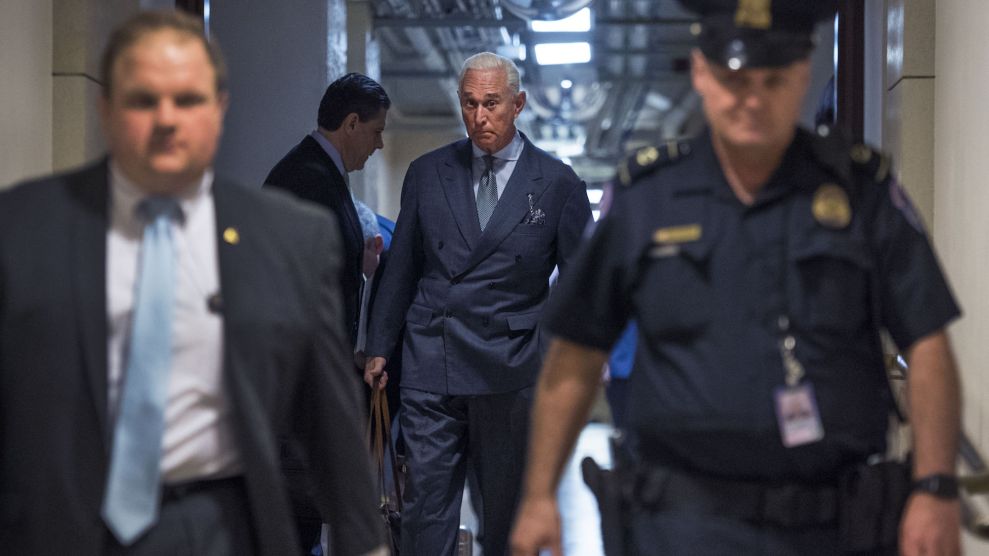 Roger Stone arrives in the Capitol to speak with the House Intelligence Committee on September 26, 2017.Tom Williams/CQ Roll Call/Congressional Quarterly/Newscom via ZUMA Press)

The longtime Trump adviser told the House intelligence committee last year that he had exaggerated just a few weeks earlier when he described using a backchannel to communicate with Julian Assange, the founder of WikiLeaks, Mother Jones has learned. Stone told the committee his claim of a backchannel to Assange was “a bit of salesmanship.”

For those attempting to track Stone’s evolving stories, this revelation means he has now backed away from the account he gave last year that his backchannel to Assange was New York radio show host and comedian Randy Credico. Stone’s new version came after Credico told Mother Jones and others that he did not pass information between Assange and Stone. “He’s an inveterate liar,” Credico said in an interview. “It’s not Grimm’s fairy tales, it’s Stone’s fairy tales.”

Around the time the intelligence committee subpoenaed Credico after Stone named him as the backchannel, Stone pressed Credico not to contradict his claims, Credico told Mother Jones. “He said, ‘Just go along with it,’” Credico said. Credico later asserted his Fifth Amendment rights and declined to talk to the panel.

More problems with Stone’s accounts came Tuesday when the Washington Post reported that Stone told one confidante in spring 2016 that Assange had obtained emails that would damage Democrats. That conversation allegedly came before public reports that hackers had penetrated the Democratic National Committee and the email account of a top Clinton campaign official. The Post also said that Stone had told another former Trump adviser, Sam Nunberg, that he had met with Assange in 2016. Stone now says that claim was a joke and notes he never left the country that year. (Assange is confined in Ecuador’s Embassy in London.)

These and other issues with Stone’s statements about his WikiLeaks contacts suggest that the self-described showman is adjusting his story as he navigates between his thirst for attention and his desire to avoid prosecution.

These and other issues with Stone’s statements about his WikiLeaks contacts suggest that the self-described showman is adjusting his story as he navigates between his thirst for attention and his desire to avoid prosecution. The inconsistencies raise the questions of whether any of Stone’s claims about his information about stolen Democratic emails are true.

Stone has spent much of the past year trying to walk back his boasts during the 2016 presidential campaign in which he claimed advance knowledge of the release of the Democratic emails by WikiLeaks—emails that US intelligence agencies believe Wikileaks received from Russian hackers.

While speaking at a Tea Party rally on August 8, 2016, in Florida, Stone said he had “communicated with” WikiLeaks founder Julian Assange about the group’s plans to release damaging material on Clinton close to election day. On August 21, 2016, Stone tweeted that Clinton’s campaign chairman John Podesta would soon face “his time in the barrel.” When WikiLeaks released thousands of Podesta’s hacked emails in October, Stone’s tweet appeared suspiciously prescient.

Stone has acknowledged contacts with Gufficer 2.0, a online persona suspected of serving as a front for Russian intelligence, but insisted his contacts were inconsequential. Last month, he admitted exchanging Twitter messages with WikiLeaks in October 2016 but described them as insignificant and having occurred only after the Podesta emails were released.

Stone later said that his statement about Podesta relied on reports alleging that the Clinton campaign chief had his own Russia connections. (The reports related to clients of the Podesta Group, a Washington lobbying and public relations firm Podesta founded with his brother Tony in 1988.) As for having inside knowledge, Stone said he never communicated directly with Assange, but drew on public information, including a June 12, 2016 interview in which Assange said that he planned to release hacked Clinton emails. Stone said he also asked a journalist, whom he later identified as Credico, to confirm Assange’s claims.

“I have referred publicly to this journalist as an ‘intermediary,’ ‘go between’ and ‘mutual friend,’” Stone said in a 47-page prepared statement he shared with reporters ahead of his House intelligence committee interview on September 26, 2017. “All of these monikers are equally true.”

Stone had refused to identify his alleged ‘go between’ in the committee interview. But he relented in an October 2017 letter to the committee, portions of which were obtained by Mother Jones.

Here’s what one of Stone’s lawyers, Grant Smith, told the committee in the letter: “Mr. Stone concedes that describing Credico as a go-between or intermediary is a bit of salesmanship for his InfoWars audience.” (Infowars is far-right media organization, infamous for pushing conspiracy theories. Stone writes for the site and appears on its radio show.) “Mr. Credico never said he knew or had any information as to source or content of the material,” Smith wrote. He said however that Credico accurately confirmed Assange’s claims were true.

“Roger made more of it than it was. He used ‘backchannel,’ which implies a conversation; but it was nothing like that at all,” said one source familiar with Stone’s account. “There was no conversation.”

Stone told Credico ‘no one would believe him’ if he lied.“

Stone also said in a March 9 post on his website that he had exaggerated. “When I spoke of a backchannel to WikiLeaks,” Stone wrote, “I was probably over-dramatizing the role of progressive talk show host, comic, impressionist, and activist Randy Credico.”

Stone claimed in his September statement to the House intelligence committee and in his follow-up letter that he had asked Credico about Assange’s claim to have Clinton emails after noticing that Credico had interviewed Assange on his radio show.

But David Corn, the Washington bureau chief for Mother Jones, and Michael Isikoff, the chief investigative reporter for Yahoo News, report in their book Russian Roulette that Stone’s timeline has problems. Credico said he never spoke to Assange before August 25. That is 17 days after Stone first publicly said he had “communicated” with Assange.

Stone’s lawyer, Smith, argued in an email that this timeline is irrelevant because “Credico was long acquainted and associated with members of Assange’s legal team and that they communicated often.” In his March 9 post, Stone suggested Credico could have obtained information through Margaret Kunstler, an attorney who has worked with WikiLeaks. Kunstler has declined to comment.

Credico said that when Stone asked him about Assange, he confirmed nothing and merely told Stone to check Assange’s public statements. “I wasn’t a backchannel,” Credico said.

While Stone was in touch with the House intelligence committee last fall, Credico said Stone was eager to ensure that the talk show host backed Stone’s story. If Credico contradicted Stone’s timeline regarding their contacts, “no one is gonna believe you,” Stone said, according to Credico.

Smith, Stone’s attorney, denied that Stone had tried to influence Credico’s account or potential testimony. “Mr. Stone never urged, nor would ever urge, Mr. Credico to do anything other tell the truth if questioned by authorities,” Smith said. “Stone told Credico ‘no one would believe him’ if he lied.”

“Mr. Stone continues to maintain that Credico was a confirming source that Wikileaks had, and would publish, nonspecific material on Hillary Clinton,” Smith said. “Back channel, intermediary, or confirming source, there is no inconsistency.”