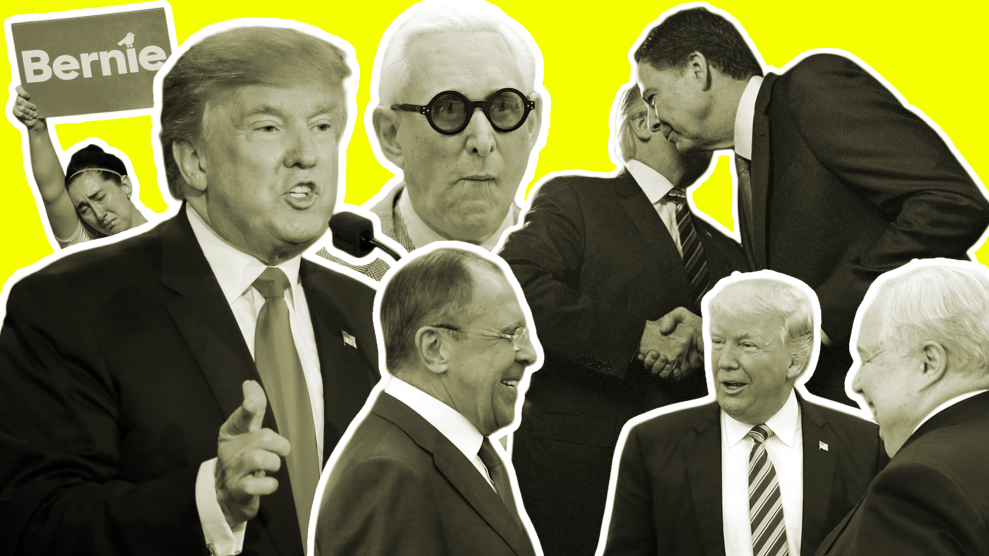 The drumbeat of revelations over the past several weeks has been overwhelming. So we’ve created this timeline—from the hacking of the Democratic National Committee through the aftermath of Trump’s firing of FBI Director James Comey—to help you follow this scandal threatening the presidency.

June 15: Guccifer 2.0, a persona later connected to the Russians, takes credit for the DNC hack and begins posting documents. 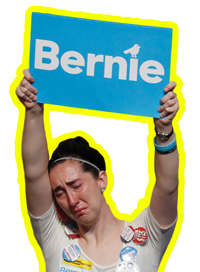 July 5: FBI Director James Comey announces the bureau found no evidence to support criminal charges against Hillary Clinton for her use of a private email server as secretary of state. But he adds that Clinton and her staff were “extremely careless” in their handling of classified information. Donald Trump tweets, “No charges. Wow! #RiggedSystem.”

July 22: Three days before the Democratic convention, WikiLeaks publishes nearly 20,000 hacked DNC emails. Some indicate that party officials favored Clinton over Bernie Sanders, including Debbie Wasserman Schultz, who resigns as party chair. Spread in part by Twitter bots, the emails further pit Clinton and Sanders supporters against each other.

July 27: Trump calls for Russia to hack Clinton’s email: “I think you will probably be rewarded mightily by our press.”

Late July: The FBI begins to investigate contacts between the Trump campaign and Russia.

Aug 8: Longtime Trump confidant and political dirty trickster Roger Stone boasts to a GOP group in Florida about WikiLeaks’ founder: “I actually have communicated with Julian Assange…There’s no telling what the October surprise may be.”

Aug 21: Stone tweets about Clinton campaign CEO John Podesta: “Trust me, it will soon be the Podesta’s time in the barrel. #CrookedHillary.” 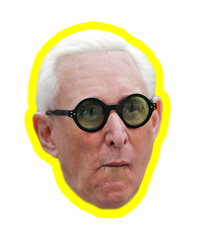 Aug 27: After being briefed on classified information, Senate Minority Leader Harry Reid sends a letter to Comey urging an investigation: “The prospect of individuals tied to Trump, WikiLeaks and the Russian government coordinating to influence our election raises concerns of the utmost gravity.”

Sept 26: In the first presidential debate, Trump suggests the DNC hack could be the work of China or “somebody sitting on their bed that weighs 400 pounds.”

Oct 3: Stone tweets, “I have total confidence that @wikileaks and my hero Julian Assange will educate the American people soon #LockHerUp.”

Oct 7: US intelligence agencies announce they are “confident” the Russian government aimed to interfere in the election and collaborated in the DNC leaks. Later in the day, a 2005 Access Hollywood video emerges in which Trump brags about sexually assaulting women. Within an hour, WikiLeaks begins releasing several thousand emails stolen from Podesta.

Oct 10: “I love WikiLeaks!” Trump declares at a campaign rally.

Oct 11: The Obama White House announces it is considering retaliation against Russia for cyberattacks.

Oct 19: During the final debate, Clinton says Trump would be Putin’s “puppet” if elected and rebukes his call to hack her email. “You encouraged espionage against our people.”

Oct 28: Comey notifies Congress that the FBI is reopening the Clinton matter, after a criminal probe into disgraced Rep. Anthony Weiner reveals his laptop contains emails between his wife, Huma Abedin, and Clinton, her boss.

Oct 31: At a campaign rally, Trump says, “It took guts for Director Comey to make the move that he made…where they’re trying to protect her from criminal prosecution…What he did was the right thing.”

Nov 15: National Security Agency Director Michael Rogers remarks about Russia and WikiLeaks, “This was a conscious effort by a nation-state to attempt to achieve a specific effect.”

“I think the Russians participated in helping this man get elected. And they helped destroy the candidacy of Hillary Clinton.”

Jan 4: Trump tweets, “Julian Assange said ‘a 14 year old could have hacked Podesta’—why was DNC so careless? Also said Russians did not give him the info!”

Jan 10: At a Senate Intelligence Committee hearing, Comey declines to say whether the FBI is investigating Trump campaign ties to Russia. He notes that Russian hackers also attacked the Republican National Committee but that none of that material was released.

Jan 11: Trump acknowledges the Russians hacked the DNC: “I think it was Russia.”

Jan 14: Rep. John Lewis tells NBC’s Chuck Todd that he does not consider Trump to be “a legitimate president,” and he says he won’t attend Trump’s inauguration: “I think the Russians participated in helping this man get elected. And they helped destroy the candidacy of Hillary Clinton.”

Jan 15: Incoming White House chief of staff Reince Priebus says Trump has confidence in the FBI director: “We have had a great relationship with him over the last several weeks. He’s extremely competent.”

Jan 20: Trump is sworn in as president. 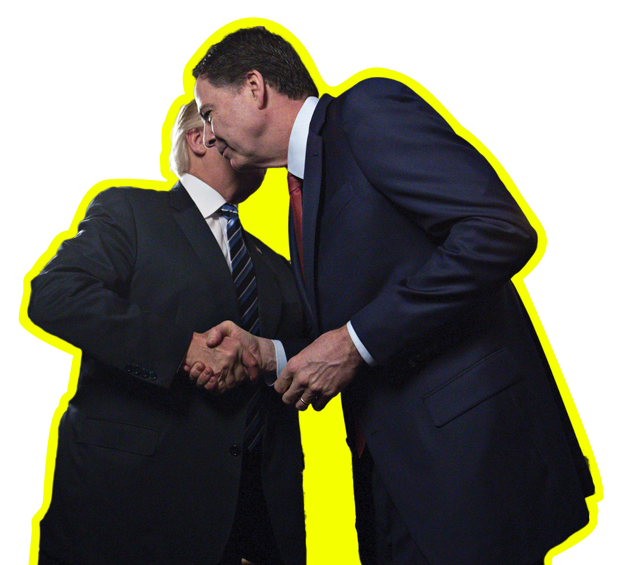 Jan 26: Acting Attorney General Sally Yates warns the Trump White House that Flynn lied about his conversations with Kislyak and is vulnerable to blackmail by the Kremlin.

Jan 27: Trump and Comey have a one-on-one dinner at the White House, where, it is later reported, Trump asks Comey to swear his political loyalty. Comey declines.

Feb 13: After the Washington Post reveals Flynn lied about his conversations with Kislyak, Flynn resigns.

It’s up to the public to make sure the truth prevails. Help us investigate the Russia scandal with a tax-deductible donation today.

Feb 19: Following a meeting with Comey, the Senate Intelligence Committee sends letters to more than a dozen agencies, groups, and individuals asking them to preserve all communications related to Russia’s 2016 election interference.

March 2: In the wake of revelations that Attorney General Jeff Sessions failed during his confirmation hearings to disclose two conversations with Kislyak, Sessions announces, “I have now decided to recuse myself from any existing or future investigations of any matter relating in any way to the campaigns for president of the United States.”

March 4: Based on no evidence, Trump tweets, “Terrible! Just found out that Obama had my ‘wires tapped’ in Trump Tower just before the victory. Nothing found. This is McCarthyism!”

March 20: During a public hearing held by the House Intelligence Committee, Comey confirms the FBI is investigating possible “coordination” between the Trump campaign and Russia. He debunks Trump’s claims of surveillance by Obama: “I have no information that supports those tweets.”

April 12: Asked if it’s “too late” for him to request Comey’s resignation, Trump tells Fox Business, “No, it’s not too late, but you know, I have confidence in him. We’ll see what happens. You know, it’s going to be interesting.”

May 2: Trump tweets Comey is “the best thing that ever happened to Hillary Clinton” and the “Trump/Russia story was an excuse used by the Democrats as justification for losing the election.”

May 3: Comey tells the Senate Judiciary Committee, “It makes me mildly nauseous to think that we may have had some impact on the election,” but says he reopened the Clinton probe because Abedin had forwarded “hundreds and thousands of emails, some of which contain classified information.”

First week of May: Comey seeks more resources for the Trump-Russia investigation.

May 8: Trump tweets, “The Russia-Trump collusion story is a total hoax, when will this taxpayer funded charade end?” Former National Intelligence Director James Clapper tells Congress that by sowing doubts, Trump “helps the Russians” damage the US political system.

The Russia-Trump collusion story is a total hoax, when will this taxpayer funded charade end?

May 9: The FBI corrects Comey’s testimony: Only “a small number” of Abedin emails were forwarded, few contained classified information, and none were new. The same day, Trump fires Comey via a letter delivered to FBI headquarters. Comey, in Los Angeles, learns of the news via a TV screen and initially thinks it’s a prank. Trump’s letter says he was prompted by Sessions and Deputy Attorney General Rod Rosenstein, who wrote a three-page memo critical of Comey’s handling of the Clinton probe. Trump’s letter also claims Comey personally absolved him on three separate occasions.

May 10: Trump unleashes a tweetstorm, including, “Comey lost the confidence of almost everyone in Washington, Republican and Democrat alike. When things calm down, they will be thanking me!” 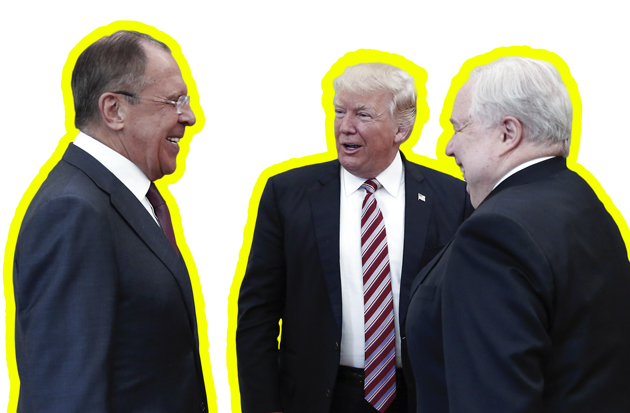 Meanwhile, at Putin’s request, Trump greets Kislyak and Russian Foreign Minister Sergey Lavrov in the Oval Office, where a Russian state-sponsored photographer is the only media allowed in. Trump tells them Comey was “a real nut job” and that firing him took “great pressure” off Trump with regard to Russia.

May 11: Acting FBI Director Andrew McCabe testifies that, contra White House statements, the Russia probe is “highly significant” and “Comey enjoyed broad support within the FBI and still does to this day.” Trump tells NBC’s Lester Holt a new version of why he fired Comey: “I decided to just do it. I said to myself, I said, ‘You know, this Russia thing with Trump and Russia is a made-up story.'”

May 12: Trump tweets, “James Comey better hope that there are no ‘tapes’ of our conversations before he starts leaking to the press!”

James Comey better hope that there are no “tapes” of our conversations before he starts leaking to the press!

May 15: The Post reports that Trump disclosed highly classified intelligence on ISIS to Lavrov and Kislyak during their Oval Office meeting. Senate Foreign Relations Committee Chairman Bob Corker says the White House is “in a downward spiral” and “has got to do something soon to bring itself under control and in order.”

May 16: The Times reports that Comey kept detailed memos on his interactions with Trump—including when Trump pressured him at an Oval Office meeting in February to shut down the FBI investigation into Flynn. “I hope you can let this go,” Trump told Comey.

May 17: Amid rising turmoil on Capitol Hill, including talk of possible impeachment of Trump for obstruction of justice, the Senate Intelligence Committee seeks Comey’s memos and invites him to testify. Rosenstein appoints former FBI Director Robert Mueller to serve as a special counsel overseeing the continuing FBI investigation.

See our entire updated Trump-Russia timeline dating back to the 1980s.