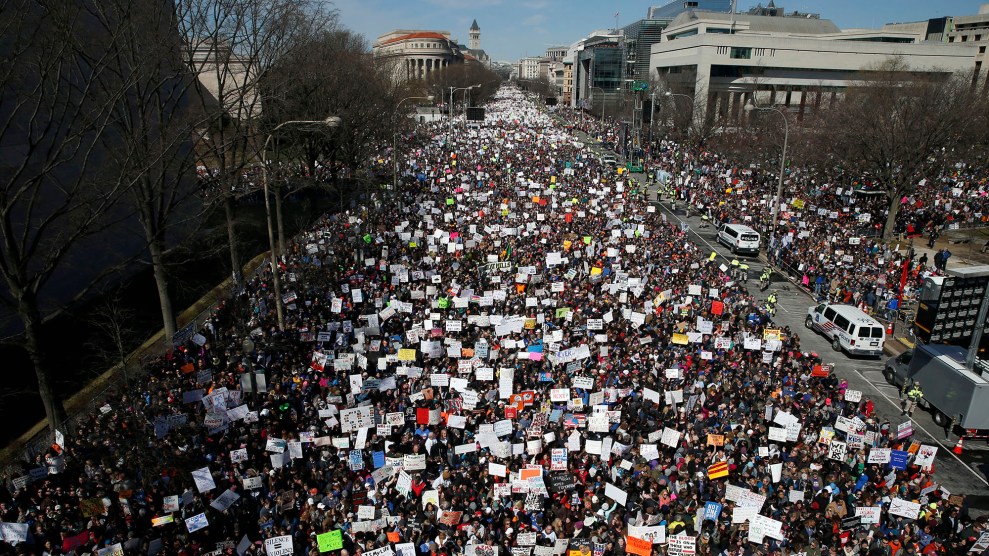 People fill Pennsylvania Avenue during the "March for Our Lives" rally in support of gun control, Saturday, March 24, 2018, in Washington.Alex Brandon/AP

Hundreds of thousands of people from all over the US—and even the world—are planning to take part in over 800 rallies and marches scheduled for Saturday to protest the epidemic of gun violence in the United States and to call for stricter gun control measures. The “March For Our Lives” in Washington, DC, and companion protests worldwide, were organized by students from Marjory Stoneman Douglas High School in Parkland, Florida, after the mass shooting there on February 14 took 17 lives. Organizers are expecting 500,000 people in Washington, DC, alone.

The high school students, including Emma Gonzalez and David Hogg, are leading a new wave of activism around this issue. Though Florida enacted new gun control restrictions after the shooting (along with a measure to arm teachers), Congress has done nothing. The National Rifle Association also reportedly persuaded President Donald Trump not to push for tougher gun regulations.

I'm ready to change America and save lives are you?

“The mission and focus of March For Our Lives is to demand that a comprehensive and effective bill be immediately brought before Congress to address these gun issues,” says the mission statement from the march website. There were 38,000 gun deaths in the US last year and there have been 17 school shootings so far in 2018 – an average of one per week.

Mother Jones has reporters covering the protests across the country: Nathalie Baptiste and Kara Voght in DC, James West and Mark Helenowski are traveling with students and families from Newtown, Connecticut, to Washington, Ari Berman in New York City, Bryan Schatz and Al Kamalizad in Salt Lake City, and Margaret Kadifa in San Francisco. Follow them for breaking news on the marches.

And we are covering the events all day, right here:

4:15 p.m. EDT: The marches are breaking up after an extraordinary day of peaceful and massive protests against gun violence. Here’s our colleague James West, who traveled with the Newtown young people to DC.

A video rally wrap-up from the streets of #MarchForOurLives in DC: what happened here, how the Newtown High School students reacted and more from an emotional, historic demonstration: pic.twitter.com/IJkqP7Hqzc

Michelle and I are so inspired by all the young people who made today’s marches happen. Keep at it. You’re leading us forward. Nothing can stand in the way of millions of voices calling for change.

3:00 p.m. EDT: A number of victims of gun violence also attended the march in DC. Including this remarkable former lawmaker.

2:50 p.m. EDT: The speech that wasn’t a speech, showing how silence can be much more eloquent than words.

2:40 p.m. EDT: So many incredible speeches in DC. We will include more but for starters.

Hey, lawmakers: This girl was shot by an AR-15 five weeks ago, vomited on international TV, and still managed to deliver a killer speech on gun reform and inspire thousands to make a difference in gun legislation.

What have you done lately to help? #MarchForOurLives https://t.co/nldtGzU6Co

In Oakland, Mike Mechanic, who’s one of our editors in SF, is on the scene.

2:00 p.m. EDT: The marches in the west have started to gain momentum as the day wears on. Here are a few glimpses of what’s happening there.

1:45 p.m. EDT: Meanwhile, with Bryan Schatz and Al Kamalizad in Salt Lake City, Utah. They’ve been traveling with  Royce Christensen. In October 2017, he survived the worst mass shooting in modern American history in Las Vegas. Now the 22-year-old security guard is fighting for gun control and joining a protest for the first time. You can see a video of him here on our Facebook page.

"Vote them out," they're chanting. Royce says, "Damn, and this is a red state!" "Imagine what D.C. Is like," responds Darla, Royce's mom. (To find out follow @jameswest2010 and @MarkHelenowski) pic.twitter.com/X48pS8T4y3

There have been quite a few expressions of support from members of the armed services, who understand weapons better than most.

And the other side brings the heat. #MarchForOurLives pic.twitter.com/EH4OraGiVS

Massive crowds in Washington DC for #MarchForOurLives. Here’s the view from the @Newseum. pic.twitter.com/0iRrY6pisb

Better shot of the absolutely massive crowd in Washington DC for #MarchForOurLives. As seen from the @Newseum. pic.twitter.com/GsfJSwpKCP

1:00 p.m. EDT: People are coming out in all kinds of weather all over the country.

Sea of people here in LA at #MarchForOurLives pic.twitter.com/rpw607c797

A little snow won't stop us. The line is around the building. #MarchForOurLives pic.twitter.com/bXJJY5wEiT

12:45 p.m. EDT: Our reporter Kara Voght had a little chat with a US senator at the march. Take a look.

I’ll always stand for open dialogue and action – it’s the only way to ensure bad history doesn’t repeat itself. When it comes to protecting our children, all bets are off and the responsibility lies with us adults and lawmakers to listen and do. Very strong day. #MarchForOurLives pic.twitter.com/4gJ0QKdMYw

NOW: @timkaine is joining thousands for Richmond’s #MarchForOurLives this morning – tells students, “Thank you for challenging us” to act on gun violence. pic.twitter.com/6EXLoDRY6R

So proud to be in Nashville right now #MarchForOurLives pic.twitter.com/3MIqsgd7nH

12:00 p.m. EDT: Our reporters are out there covering the marches. Here’s what they are seeing.

Dave from San Diego is out here not only protesting gun violence in schools but also in churches, malls, and all the other public places where people get shot. He has children and grandkids. “I feel like I owe it to them.” #MarchForOurLives pic.twitter.com/rXFu2Q25JL

Marching with the girls at Lancaster “March for our Lives” #March4OurLives pic.twitter.com/OsjuQUfjGk

11:32 a.m. EDT: Seems like a basic question coming from Florida.

@TB_Times: Students from across Tampa Bay read an emotional letter to their Legislators #March4OurLives : guns are not allowed in government buildings – your safe place – so why should they be allowed in schools – our safe place? pic.twitter.com/QX5JnZSVhK

11:30 a.m. EDT: The marches will last one day, but they are all also focused on another big day in November.

Just got off the metro at Gallery Place where #MarchForOurLives organizers are registering people to vote. pic.twitter.com/90Fr0DKXcY

In March we MARCH

In November we VOTE #MarchForOurLives pic.twitter.com/NgRa5HwGmm

Fathers and sons. Make that sons and fathers…

11:00 a.m. EDT:  On the bus with the students from Sandy Hook, finally arriving in DC.  One of the kids shares his thoughts.

JUST CROSSED INTO D.C.: @jmittleman25 is actually speaking today at #MarchForOurLives in DC. On the stage. He's excited about handing over a banner from Newtown/Sandy Hook to Parkland survivors. His thoughts before getting off the bus: pic.twitter.com/u4fcGxUp7O

10:45 a.m. EDT: Trying to keep up with all the amazing images from all over the world is dizzying. Just look at what’s going on out there.

From our own Vishakha Darbha in NYC.

Here’s local student Imani Romney reading a poem about the double standard of news coverage when students of color are victims of gun violence pic.twitter.com/WcbnwCKjJS

10:30 a.m. EDT: Some scenes from the march in Parkland, Florida, where it all began.

Greetings from Boca Raton City Hall, where Boca's #MarchForOurLives rally is set to begin at 10 a.m. Folks are standing in line at tents for their T-shirts. pic.twitter.com/pnc4DaLm99

From London, as in England, another march.

10:15 a.m. EDT: Just in case you were thinking of visiting Mar-A-Lago—where the president has decamped for the weekend of the march, traffic will be a problem.

**CHECKPOINTS AND ROAD CLOSURES IN EFFECT AROUND MAR-A-LAGO**: Reminder to all motorists: The checkpoints and road closures in and around the area of Mar-A-Lago are in place. Expect traffic delays in this area thru Sunday, March 25, 2018. Motorists are… https://t.co/vXyN2qUmAW

My fave thing abt #MarchforourlivesSydney is that they don't NEED to march to beg their govt to stop enabling mass murder via assault weapons. They're good on that measure. Theirs was a march, on the other side of the PLANET, in support and solidarity. It's deeply humbling. 🧡 https://t.co/4U1aJIhYXG

Students are also marching in solidarity with the #MarchForOurLives throughout the world, in countries such as France, Japan and India pic.twitter.com/uHYjKw9SUA

Homemade signs by Newtown students, from one of 8 buses en route to #MarchForOurLives@jameswest2010 and I are tagging along with @Junior_NAA @NewtownAction today. Halfway to DC 🚍 pic.twitter.com/jeKGXZgcr6

9:28 a.m. EDT: People going to the march have made some amazing signs. It’s still early and already getting crowded downtown.

Symbolism of school buses taking hundreds – if not thousands – of children to the #March4OurLives . https://t.co/8AFhfwLKmf

From the #MarchForOurLives outside the US Embassy in Copenhagen, Denmark, one of over 800 #NeverAgain protests happening today worldwide pic.twitter.com/gzmlvGnu4a