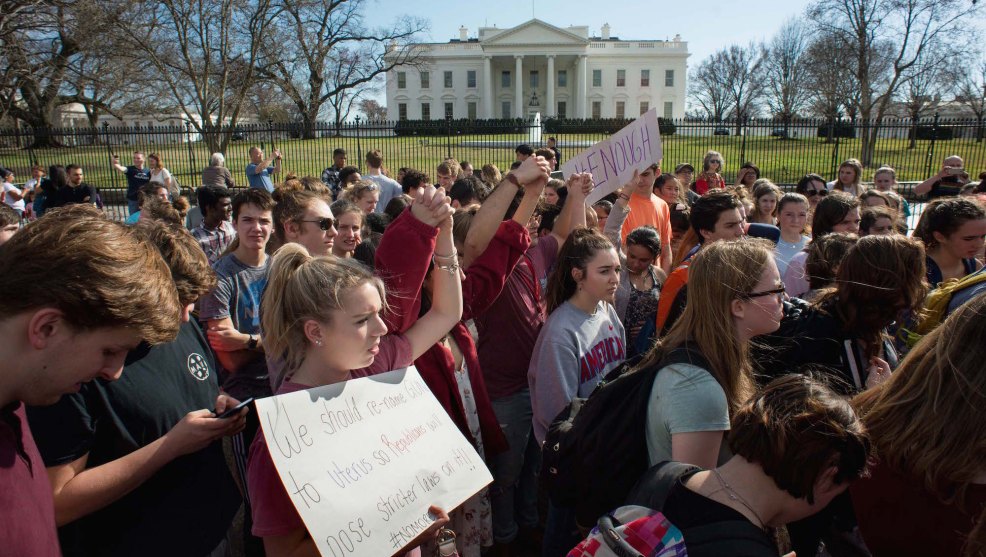 February 21, 2018 - Washington, District of Columbia - Students from the DC area walk out of class to demand gun control legislation at a gathering outside the White House. Erin Scott/ZUMA Wire

Following the mass shooting at Marjory Stoneman Douglas High School in Parkland, Florida, earlier this month, all eyes are on the students who have garnered an unprecedented amount of national attention from their calls for gun control. In the couple of weeks since the shooting, the students have grilled politicians on live television, mocked conspiracy theorists on Twitter, and inspired hundreds of people across the country to demand action from their state legislators and from Washington.

Three major national protests are already in the works and will take place over the next few months, adding to a regular stream of local activism. Here’s a look at what to expect:

With leadership from the Women’s March organizers, students and teachers across the country are planning “Enough“—a national school walkout scheduled for March 14.

According to the event’s Facebook page, the walk out will begin at 10 a.m. in each time zone and last for 17 minutes, one minute for every victim who died in the Parkland shooting; 33,000 people have RSVP-ed on Facebook that they will attend. Dozens of schools are listed on the Enough homepage as participating.

“We are not safe at school. We are not safe in our cities and towns. Congress must take meaningful action to keep us safe and pass federal gun reform legislation that address the public health crisis of gun violence,” the organizers write on the march’s homepage. “We want Congress to pay attention and take note: many of us will vote this November and many others will join in 2020.”

March 24: March For Our Lives

Ten days later, on March 24, the “March For Our Lives” will descend on Washington, D.C. The organizing for this rally began with survivors of the Parkland shooting but now involves students nationwide. Their goal is to demand that a “comprehensive and effective bill be immediately” introduced in Congress to address gun violence.

“March For Our Lives is created by, inspired by, and led by students across the country who will no longer risk their lives waiting for someone else to take action to stop the epidemic of mass school shootings that has become all too familiar,” the organizers write on their website. “In the tragic wake of the seventeen lives brutally cut short in Florida, politicians are telling us that now is not the time to talk about guns. March For Our Lives believes the time is now.”

This march gained additional notoriety last week when celebrities Oprah Winfrey, Steven Spielberg, and George Clooney each promised to donate $500,000 to the march.

According to the Washington Post, organizers expect nearly 500,000 attendees in Washington. There will also be dozens of sister marches across the country.

On the 19th anniversary of the Columbine shooting, another national walk out will take place—this one organized by Lane Murdock, a 15 year-old high school student in Connecticut, to protest gun violence in schools and inaction by lawmakers.

Murdock created a petition on Change.org to publicize the walk-out: “Public school shootings affect communities and especially teenagers,” she wrote. “On February, 14th a High School shooting in Parkland, Florida occurred, killing 17 people. Still, POTUS has not addressed any form of gun legislation. The majority of teenagers have no right to vote, leaving our voice unheard.”

Around 200,000 people have signed the petition online, committing to walk out of their schools on April 20, and teachers across the country are planning to join. According to the Hartford Courant, students will also stand in silence for 17 minutes for each victim of the tragedy.

Are there other protests being planned, perhaps in your local area? Let us know below:

We may share your response with our staff and publish a selection of stories which would include your name and location. We respect your privacy. Your email address will not be published and by providing it, you agree to let us contact you regarding your response.