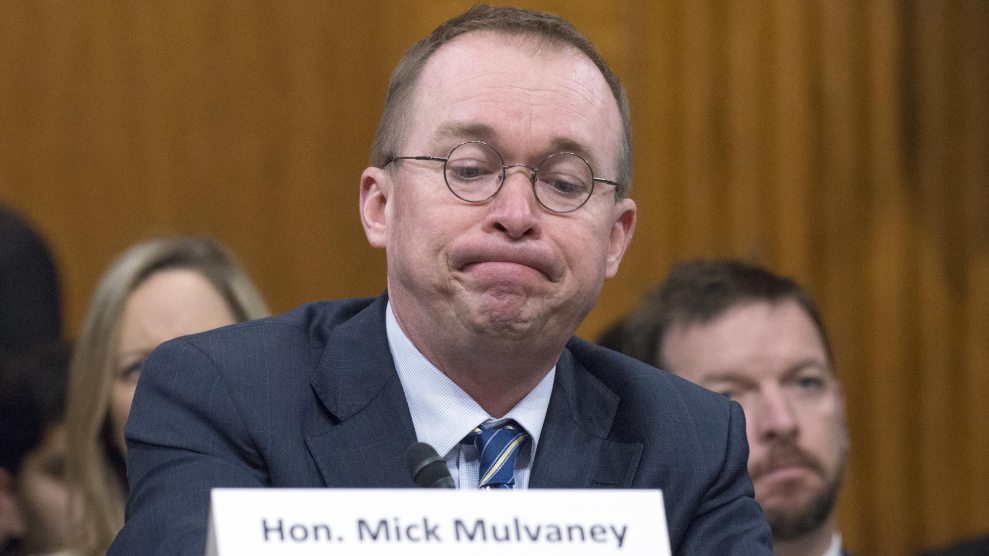 Ever since President Trump appointed Mick Mulvaney as the acting director of the Consumer Financial Protection Bureau, the financial watchdog—dreamed up by Sen. Elizabeth Warren (D-Mass.) and created in the wake of the financial crisis—has taken a loosened approach to regulating payday lenders. In recent months, the CFPB has announced plans to reconsider an Obama-era rule that sought to curb predatory practices by these lenders, and quietly closed investigations and scrapped lawsuits aimed at payday lenders around the country.

On Tuesday, 43 Senate Democrats sent a letter to the agency criticizing Mulvaney for his lax approach to payday lenders, calling it “antithetical” to the CFPB’s consumer protection mission.

The payday lending rule, the senators note in their letter, was created by the agency after five years of research and public comment collection. Polling has also found that the vast majority of Americans support the CFPB’s restrictions on payday lenders. The Democratic senators noted that they’ve learned that the CFPB is granting waivers to companies allowing them to delay compliance with the Obama-era payday rule, and also that the CFPB “may be offering the payday loan industry an opportunity to undermine the rule entirely. We view these actions as further efforts to undermine the implementation of this important consumer protection rule.”

The senators also say in the letter that they are “troubled” by the CFPB’s pattern of dropping enforcement actions against payday lenders. They highlight a closed case against four payday lenders in Kansas that had been accused of charging interest rates as high as 950 percent.

Mulvaney’s actions have also spurred accusations that he has conflicts of interest when it comes to payday lending. During his tenure as a congressman from South Carolina between 2011 and 2017, Mulvaney received more than $60,000 in campaign donations from payday lenders and sponsored several bills to loosen their supervision. Mulvaney has denied that these past contributions from payday lenders pose a conflict for his leadership of the CFPB.