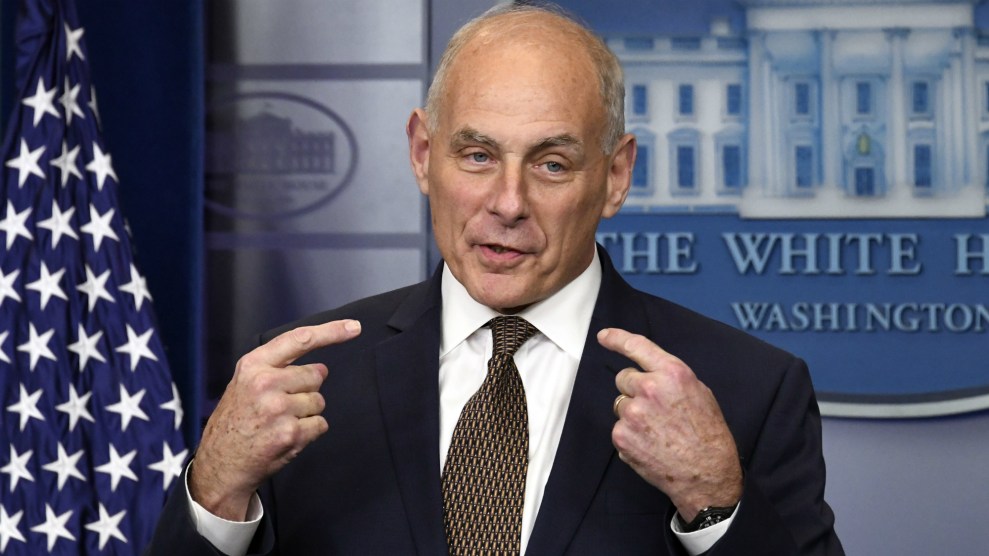 The White House on Thursday refused to say when the president’s chief of staff John Kelly became aware of the domestic abuse allegations against Rob Porter, the top aide who resigned Wednesday after two of his former wives went public with abuse accusations.

During an afternoon press briefing Thursday, deputy press secretary Raj Shah would only say that Kelly became “fully aware” of the allegations after graphic images of one of Porter’s ex-wives with a black eye were published in the Intercept on Wednesday. It remains unclear what Kelly knew before he saw the images and when he first learned about the allegations. Numerous reports say that Kelly knew about the accusations for months.

The timeline is further exposing Kelly to outrage over his continued defense of Porter: On Tuesday, after the Daily Mail published a story about the accusations, the chief of staff called him a “man of integrity.” Then, after the images became public on Wednesday, Kelly released a statement in the evening saying that he was now “shocked” by the allegations, but refused to take back his praise for Porter: “I stand by my previous comments of the Rob Porter that I have come to know since becoming Chief of Staff, and believe every individual deserves the right to defend their reputation,” Kelly said. “I accepted his resignation earlier today, and will ensure a swift and orderly transition.”

Shah’s presser on Thursday also fueled additional questions over the fact that Porter lacked a full security clearance and that the FBI had previous knowledge of the abuse claims. Shah said that a background check on Porter was never completed, despite him being in the job for a year. Shah indicated that Porter’s interim security clearance still allowed him to handle classified information, but distanced the White House with what he described as the FBI’s processes.

The White House on Thursday did offer a rare display of contrition, saying that it was “fair to say we all could have done better over the last few hours or last few days in dealing with this situation.”