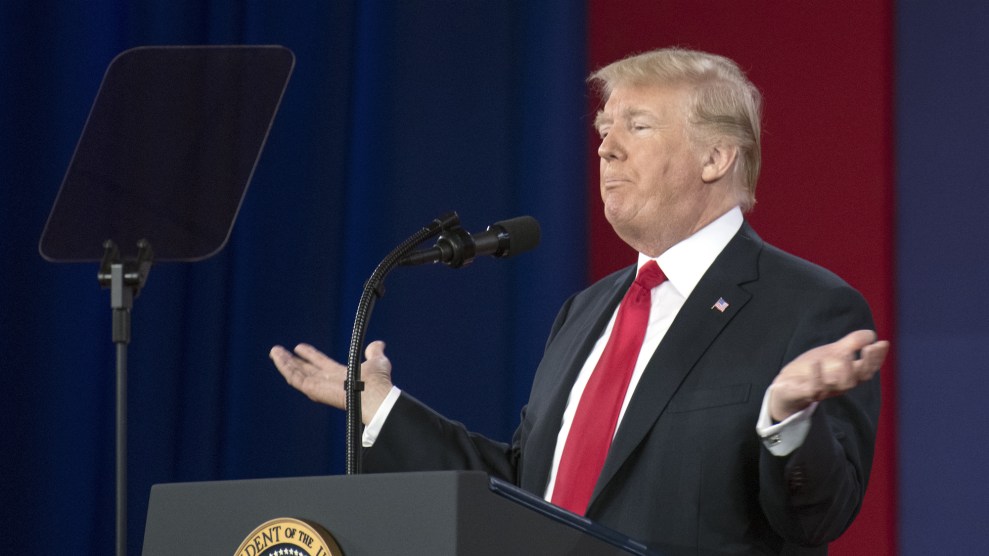 For the campaign to re-elect Donald Trump and Mike Pence, a photo of a 17-year-old Parkland shooting survivor in the hospital is apparently exactly what’s needed to rake in donations.

In a “weekly newsletter” sent out on Friday, the campaign included a picture of Trump and the First Lady visiting the survivor and her family. The newsletter boasted that the president had visited victims and first responders and “met incredible people they will never forget,” as the Huffington Post reported. At the bottom of the email, the campaign asks supporters to donate to Trump’s re-election campaign, or buy Trump merchandise.

Unbelievable: the Trump campaign just sent out an email using the Parkland shooting, including photos of survivors, to raise money for his reelection campaign. pic.twitter.com/2WInImvsIA

The fundraising newsletter also claimed that Trump is “engaging in an important national conversation” to stop future school shootings: “President Trump is taking steps toward banning gun bump stocks and strengthening background checks for gun purchasers. The President has made his intent very clear: ‘making our schools and our children safer will be our top priority.'”

But so far, the president’s plans seem to consist mostly of talking about arming teachers: On Saturday, he tweeted that “Armed Educators” could protect students because they “love” them—and that guns, along with yearly bonuses for the teachers who wield them, would be a “very inexpensive deterrent.” As my colleague Tim Murphy explained:

It’s not clear what “inexpensive” means in the context of a national program to pay teachers more money for packing heat, nor is it clear what “Up to States” means. But no matter how many times Trump flogs it, the NRA myth of the “good guy with a gun” is still just a myth. That he’s pushing it anyway doesn’t bode well for the prospects of a good-faith debate about gun control.

While Trump has said he supports legislation to tighten background checks, he’s failed to provide details. And his proposed budget reportedly cuts funding for the background check system by millions of dollars.