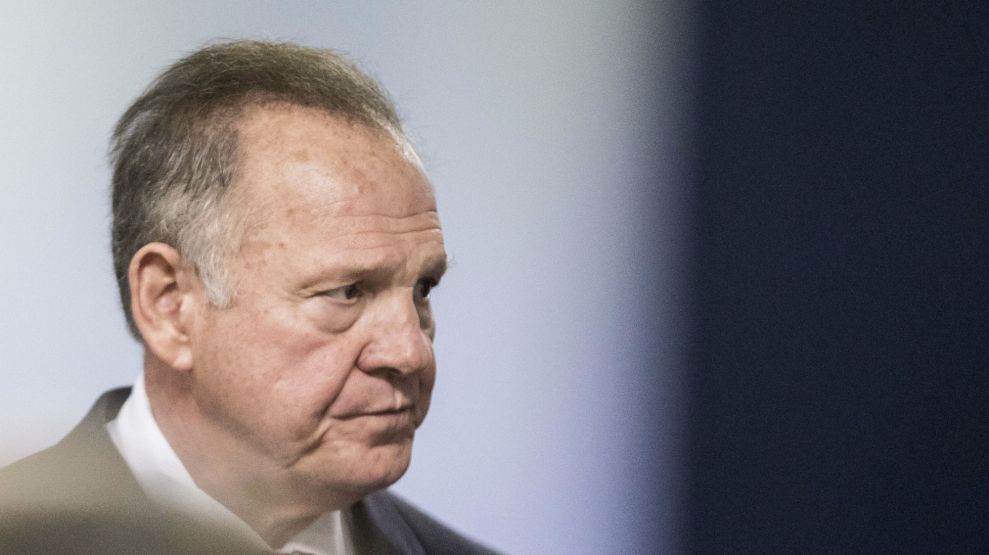 Alabama voters head to the polls Tuesday for a special election that will decide whether a Senate seat will go to Democrat Doug Jones or Republican Roy Moore, a former judge who has been accused of multiple counts of sexual misconduct, one of which involves a 14-year old teenager.

President Trump officially endorsed Moore last week, and in a rally in Pensacola, Florida, on Friday, told supporters to “get out and vote for Roy Moore,” and that the country “cannot afford” to lose the seat to a Democrat. Some Republicans have recently softened their stance on the embattled Senate candidate; after stating Moore should leave the race, for instance, Senate Majority Leader Mitch McConnell then said he would “let the people of Alabama make the call.” But many Republicans still remain strongly opposed to Moore and have strongly condemned his candidacy in just the past week.

Here are some of the more noteworthy examples:

The state’s senior senator told CNN on Sunday that he voted for a Republican in the special election, but that he wrote in an unnamed candidate instead of voting for Moore. Even though he’d rather see a Republican win, he said, he “couldn’t vote for Roy Moore.”

“We call it a tipping point. I think, so many accusations, so many cuts, so many drip, drip, drip—when it got to the 14-year-old’s story, that was enough for me. I said I can’t vote for Roy Moore,” Shelby told host Jake Tapper. He added, “the state of Alabama deserves better.”

Later that day, the editorial board of local news outlet AL.com made a striking argument in support of Shelby’s comments:

64 percent of Alabama voters reelected Shelby a year ago. He has been Alabama’s senator since 1986. He has served the state with dignity and he has never embarrassed us. His judgment of Moore is convincing.

For a state’s senior senator to not support his party’s nominee for the other seat is almost unheard of. Historians could find just one example: from 1990, when Louisiana’s Republican nominee was David Duke, a former KKK leader. Alabamians should think hard about how effective Moore can be as junior senator, with such a fissure between him and Shelby, let alone other Republicans.

Colorado Senator Cory Gardner: “We will never support him”

After Trump endorsed Moore and the Republican National Committee (RNC) resumed funding for the race, Gardner, the chairman of the National Republican Senatorial Committee (NRSC), told the Weekly Standard, “Roy Moore will never have the support of the senatorial committee. We will never endorse him. We won’t support him.” He added, “I won’t let that happen. Nothing will change. I stand by my previous statement.”

Gardner, who is up for re-election in 2020, previously said that if Moore were to win, the Senate “should vote to expel him, because he does not meet the ethical and moral requirements of the United States Senate.”

Former Presidential Nominee Mitt Romney: Moore “would be a stain on the GOP and on the nation”

Roy Moore in the US Senate would be a stain on the GOP and on the nation. Leigh Corfman and other victims are courageous heroes. No vote, no majority is worth losing our honor, our integrity.

Echoing Romney, the senator and longtime thorn in Trump’s side tweeted: “A Roy Moore victory is no victory for the GOP and the nation,” and donated $100 to Doug Jones’ campaign. Flake has announced he won’t be running for reelection.

.@MittRomney is right. A Roy Moore victory is no victory for the GOP and the nation. https://t.co/ZVSZTE4GFR

Nebraska Senator Ben Sasse: “If you believe the victims, you don’t give money to the candidates”

“It doesn’t make any sense,” Sasse said last week of the RNC resuming its financial support of Moore. The senator threatened to withdraw funding from the NRSC if it followed suit. “This sends a terrible message to victims,” he tweeted. “‘It’s not that the party won’t believe you if you come forward. It might. But just doesn’t care.'”

This is a bad decision and very sad day. I believe the women–and RNC previously did too. What's changed? Or is the party just indifferent? https://t.co/sNCiQbOgIg

This sends a terrible message to victims: “It’s not that the party won't believe you if you come forward. It might. But just doesn't care.” https://t.co/uN8nsPfCBU

Maine Senator Susan Collins: Senate will have to make a “very tough decision” if Moore wins

“I’m disappointed that the RNC has resumed its support of Roy Moore. I think that’s a mistake,” Collins told “Face the Nation” on Sunday, adding that she hadn’t supported Moore even before his sexual misconduct allegations. Collins said that the Senate would face a “very tough decision” over “whether it’s our role as senators to overturn the will of the people” if Moore were to win.

“If the allegations are known prior to the election, which they weren’t in the case of Al Franken, for example, then we have a very tough decision to make about whether it’s our role as senators to overturn the will of the people,” she said. “Now, I think it’s a different situation if the allegations are not known, or if they occur while the person is sitting in the Senate.”

Former Secretary of State Condoleezza Rice: “We must insist that our representatives are dignified, decent, and respectful of the values we hold dear”

Without directly naming Moore, the former Bush cabinet official urged Alabama voters to head to the polls and “to take a stand for our core principles and for what is right,” in a statement published by AL.com Monday. “I know that Alabamans need an independent voice in Washington. But we must also insist that our representatives are dignified, decent, and respectful of the values we hold dear,” she wrote.

Joyce Simmons, committeewoman for Nebraska RNC: “[I] wish I could have continued my service to the national Republican Party that I used to know well”

Simmons resigned on Monday in protest of the committee’s renewed financial support for Moore, writing in a letter to her colleagues: “I strongly disagree with the recent RNC financial support directed to the Alabama Republican Party for use in the Roy Moore race. There is much I could say about this situation, but I will defer to this weekend’s comments by Senator Shelby.” She added, “I will miss so many of you that I knew well; and wish I could have continued my service to the national Republican Party that I used to know well.” The RNC sent $170,000 to the Alabama Republican Party to support Moore’s candidacy last week, according to the Associated Press.