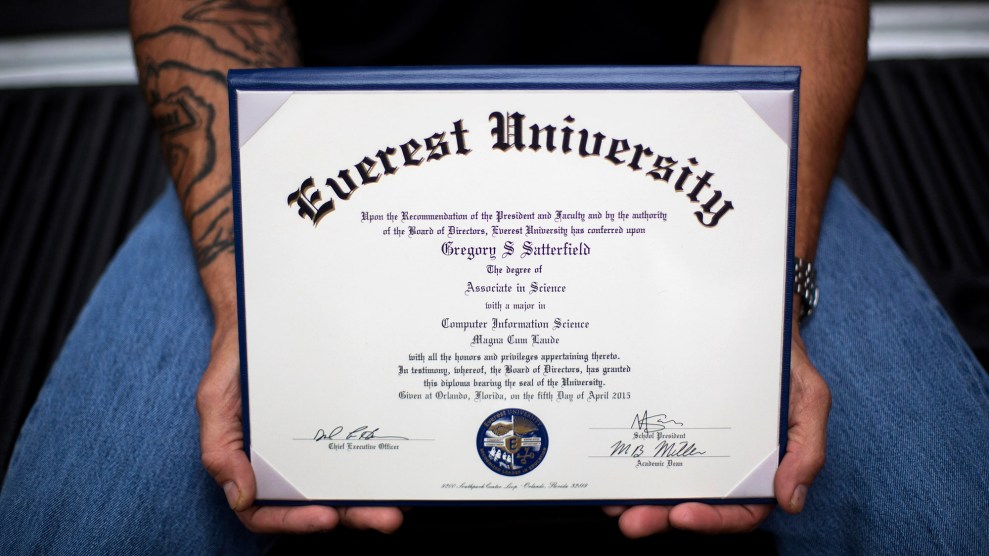 Shane Satterfield is a roofer who owes more than $30,000 in debt for an associate’s degree in computer science from a now-shuttered for-profit collegeDavid Goldman/AP

Late Tuesday evening, the House Education and Workforce Committee finalized a sweeping bill that would have far-reaching consequences on how American colleges and universities are held accountable. Among the biggest winners in the proposed legislation? For-profit colleges, which have long been accused of engaging in deceptive practices and saddling vulnerable students with both meaningless degrees and crushing debt.

In what would be the first comprehensive rewrite of the Higher Education Act since 2008, the “Promoting Real Opportunity, Success, and Prosperity through Education Reform” (PROSPER) Act would roll back much of the regulatory framework the Obama administration put in place to protect students from predatory colleges.

“The worst actors in this field offer weak educational opportunities that actually result in students having a poorer financial outlook than if they had not attended the school at all,” Rep. Bobby Scott (D-Va.), the committee’s ranking Democrat, said Tuesday morning. “We know the names because we’ve seen the headlines: ITT Tech. Corinthian. We know that these schools prey on low-income and vulnerable students to pad their coffers.”

“The worst actors in this field offer weak educational opportunities that actually result in students having a poorer financial outlook than if they had not attended the school at all.”

The bill, which passed out of committee on party lines and will move to the full House for a vote, would make it more difficult for students to file for debt relief in cases of misconduct on the part of for-profit colleges. It would also eliminate a separate regulation known as the 90/10 rule, which requires for-profits to get no more than 90 percent of their revenue from federal financial aid dollars, opening the door to for-profit colleges solely funded by taxpayers. And not only does it repeal the so-called gainful employment rule, which allows the federal government to pull financial aid from career colleges that failed to prepare students for “gainful employment in a recognized occupation,” but it also prevents education secretaries from enacting a similar rule in the future.

The bill also gets rid of what’s known as the credit hour rule, which sets a minimum definition for how colleges distributed credits to courses. The rule was implemented in 2011 after the Education Department’s inspector general found three accreditors had failed to properly oversee how their colleges doled out credit hours. One regional accreditor, for example, allowed a for-profit college to give out 9 credits for a 10-week course, a far cry from the 3 credits typically earned for a 15-week course at a traditional college. (The federal government uses credit hours to measure student’s work and to determine how much financial aid dollars schools receive for a program.)

The PROSPER Act is only the latest attempt by Republicans and the White House to roll back the regulatory changes instituted by the Obama administration.

Dropping these Obama-era accountability measures would adversely affect low-income communities, says Barmak Nassirian, director of federal relations at the American Association of State Colleges and Universities. “That’s who they prey on,” he says. Former Education Secretary John King Jr. agreed, writing in a separate letter to the committee that the bill “rescinds vital protections for students and taxpayers and weakens accountability for the institutions most likely to prey on low-income students and students of color.”

The PROSPER Act is only the latest attempt by Republicans and the White House to roll back the regulatory changes instituted by the Obama administration. Last year, for instance, Obama’s Education Department finalized changes to the so-called borrower defense rule to make the process clearer for students who said they were defrauded from career colleges and were seeking debt relief. While those changes were supposed to go into effect on July 1, Education Secretary Betsy DeVos announced that the department would instead delay the rule’s implementation, even as it hasn’t approved a debt relief claim this year. Meanwhile, the Education Department also halted the implementation of the gainful employment rule, despite finding in January that 98 percent of the more than 800 programs that failed gainful employment accountability standards were for-profit institutions.

Meanwhile, in August, Sen. Elizabeth Warren (D-Mass.) sent a letter to the Education Department questioning the involvement of Robert Eitel, who serves as a special assistant to DeVos, in the postponing of the gainful employment and borrower defense rules. Eitel most recently oversaw regulatory legal compliance for Bridgepoint Education, a for-profit college operator that runs Ashford University and University of the Rockies. Julian Schmoke Jr., who previously served as dean of DeVry University, now oversees the Student Aid Enforcement Unit, the Education Department’s higher education fraud watchdog.

House Democrats have vowed to fight the PROSPER Act, calling it a “war on students.” As my colleague Kara Voght points out, the bill is packed with unpopular provisions that some warn could make college less affordable for students, such as ending grants for aspiring teachers and low-income students and certain loan forgiveness programs. But when Democrats introduced amendments to the bill to restore the for-profit regulations, Republicans blocked their changes. Scott, the Virginia Democrat, said in a statement Tuesday night that while the Higher Education Act “has always been considered in this Committee in a bipartisan way,” the PROSPER Act “cannot be considered bipartisan because it chooses clear winners and losers.”

“Under this bill,” he said, “corporate interests are put first and students are put last.”