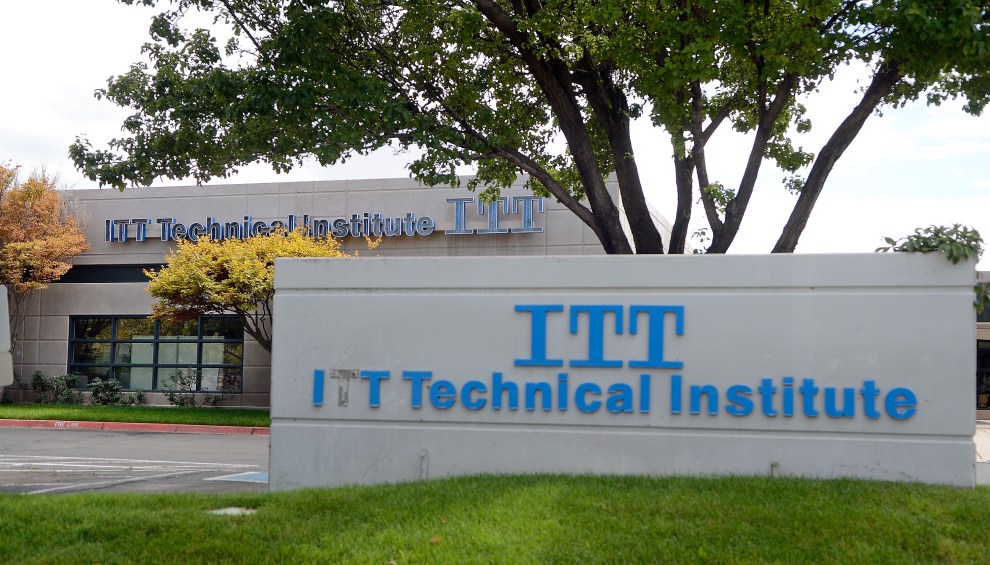 ITT Technical Institute announced it would shut down campuses in 2015. Jim Thompson/Albuquerque Journal/Zuma

Between her two stints as an admissions officer in the for-profit college industry—once at a beauty school, another at ITT Technical Institute—Tressie McMillan Cottom served as part of the colleges’ teams of evangelists. In meetings and calls, she wooed prospective students with the promise of job security. After two years in the industry, McMillan Cotton quit, called up former students to encourage them to enroll in the local community college, and turned her attention to understanding the for-profit industry’s growth. She argues in her upcoming book, Lower Ed: The Troubling Rise of For-Profit Colleges in the New Economy, that it’s the colleges—not the students—that reap the benefits. 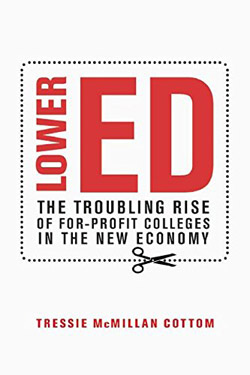 The for-profit higher ed industry, with an enrollment of 1.6 million people, down from 2.4 million in 2010, has been at the center of lawsuits and complaints about abusive practices and saddling students with debt without degrees, putting the cost to taxpayers at billions. In the last few years, under the Obama administration, the Department of Education aggressively sought to curb failing programs with the threat of pulling federal funding, leading to the shutdown of major chains like Corinthian Colleges and ITT Technical Institute. Even with more than 800 vocational programs at risk of losing funding from federal loans, 98 percent of which are for-profit schools, for-profit colleges are positioned to benefit from calls for looser regulations and less government oversight.

Through extensive interviews, research, and her own recollections, Cottom, now a sociologist at Virginia Commonwealth University, examines the for-profit industry’s rise in the past two decades in Lower Ed, which comes out Tuesday.

I spoke to Cottom about people’s assumptions about those who enroll in for-profit colleges, how small debts can lead to big problems in the long haul, and what’s next for the industry in under President Donald Trump’s administration.

Mother Jones: Why do you think people go to for-profit colleges?

Tressie McMillan Cottom: The assumptions we made about why students go to for-profit colleges let too many people off the hook and ultimately makes what was a social problem into an individual problem. I wanted to shift the responsibility for choosing a for-profit college back to this collective problem.

“They figure, if you are going to let me borrow $80,000 for the only practical option for me to get ahead and tell me that I need college to get ahead, then it must be an okay choice.”

MJ: What are those assumptions people make about who attends for-profit colleges?

TMC: They tended to fall into two camps: Students were thinking like consumers and they were basically making the most cost-effective decisions available to them. I laugh when I think only higher education researchers would think that people would sit down with a spreadsheet that makes their life choices. I’ve literally never seen anybody make a college choice that way. The other camp was that students just don’t know any better. Instead, what I find is students are somewhere in the middle. They have some idea of what college means. They have an idea that other people value it a lot. They know they need it to get ahead. They know there are some different types of schools. They may not know the words for them, but they know, for example, that the University of Phoenix is not the local public college. What they say is, if these things are that different from each other, they wouldn’t let me borrow so much money to attend them. They wouldn’t exist. And to be fair, they should think that. We shouldn’t have allowed that to happen. They figure, if you are going to let me borrow $80,000 for the only practical option for me to get ahead and tell me that I need college to get ahead, then it must be an okay choice. Once they assume that, they rationalize every other choice about college around that.

TMC: My sense is that Jerry Falwell is the most knowledgeable education person with direct access to President Trump. [Education secretary Betsy] DeVos doesn’t have any. That’s why he appointed her. Our real challenge is probably Jerry Falwell, who has a history of saying in the state of Virginia where he’s from that he resents the overreach of liberal institutions. And by liberal, they usually mean public education. What [Trump] can do is make it hostile for institutions to compete with for-profit colleges, and that’s what I suspect we’ll start to see. I suspect we’ll start to see the ramping up of public institutions to adopt more profit models. The Right often thinks that higher education has an unfair monopoly over things like information. If we aren’t now, we should expect a rise to the top of the target list in this administration, and for-profit colleges are going to be used to bludgeon this.

MJ: You write that for-profits are more complicated than “big, evil con artists.” Rather, they’re indicators of social and economic inequalities. How so?

TMC: Workers are increasingly responsible for navigating all the risks of the economy. Instead of saying “Hey, we realized workers are going to have to change jobs over their lives,” they are going to have to retrain. Instead of the public sector providing support for you to do that, we’re going to keep telling you to go back to college. The problem with that is if everybody doesn’t have the equal access to prepare for college. We know the dismal inequalities that exist in K-12 by race, class, and gender. Not everybody is equally prepared to go to college, but now everybody is encouraged to do so just so they can work. That might be kind of okay if for-profit colleges totally transformed people’s earning potential. The data are pretty clear: for-profit colleges don’t do that. These colleges can’t transform people’s chances in life. So the people who are already in for-profits because of inequality spend a lot of money to try to fix their situation and in doing so, only make their inequality worse.

MJ: Your book mentions the case of a student named London, who attended a small, regional for-profit college, and noted that students were more likely to default on smaller debts than high ones. How typical is her experience among those who attend for-profit colleges?

TMC: It is typical. What we know of those who tend to default on smaller amounts is that they were more likely to go to a non-traditional college. When people are defaulting on $500, it’s not because the thing they were purchasing was so expensive. It’s that they started off so poor. For me, the real question was: Why is somebody with so few assets being encouraged to take on student loan debt? Oh, well, she’s encouraged to take it on because we’ve destroyed the welfare system. Almost all of those transition to work programs have been hobbled. Now the only way for her to get direct job training is to go to Brookstone College of Business and take on a student loan. That’s as much about what it means to be poor as it is about the high cost of higher education. Working-class and middle-class people certainly need a solution to the high cost of student loan debt, and I’m in favor of just about every aggressive program out there that would do that. But that still is going to leave us a problem about the poorest Americans. And the poorest Americans tend to be black, brown, and women, and responsible for children.

If it were up to me, for-profit colleges would not be allowed to do anything above certificate-level training. They would be heavily regulated and administered at the state level, and there would be tuition cap on what they charge. Even with that, we’d still have a lot of Londons.

MJ: What does the boom-bust cycle of the for-profit industry tell us about the evolution of how we approach higher education in the US?

Then two things happen: There are rampant excesses—diploma mills, fraud, etc. Usually, there’s a political change of the guard, and regulations become a little stricter. Then, what tends to happen is that the economy gets a little better. There are fewer people that need to go to college. Once the labor market strengthens, you see a downturn in for-profit college enrollment. It’s always difficult to make predictions. I don’t like to. If I had to make a prediction based on what we know about the economy, I think those boom and bust cycles are going to happen a little more frequently. We have a steadier flow of people who are expected to meet cycle in and out of the labor market. We need to pay attention to how we are going to help those people. We don’t have any other solutions for them right now.