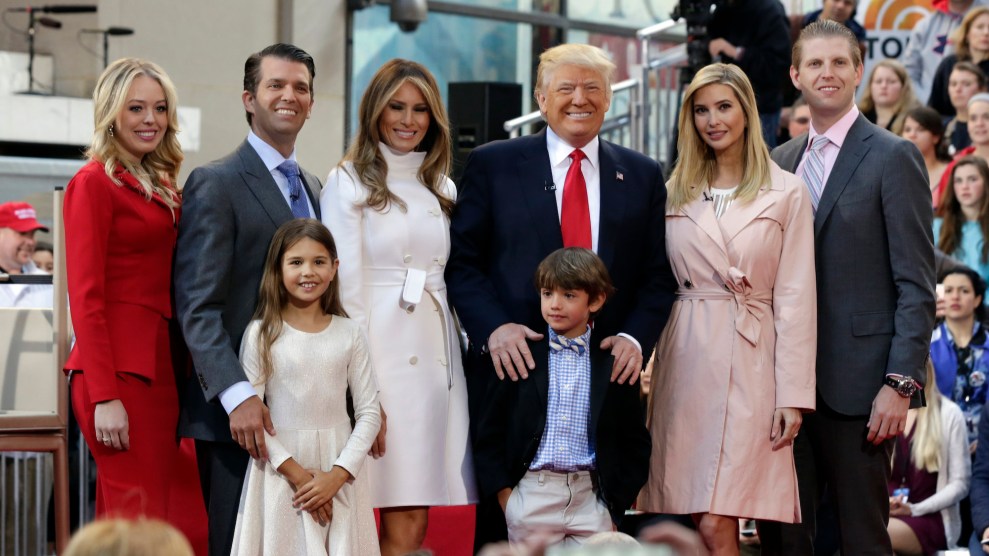 Then-candidate Donald Trump poses for a photo with his family in New York last year.Richard Drew/AP

On Thursday, House Republicans released their long-awaited plan to cut taxes by $1.5 trillion over ten years. If that bill becomes law, President Donald Trump and his children stand to make hundreds of millions of dollars.

The centerpiece of the Tax Cuts and Jobs Act is a $100 billion per year corporate tax cut financed by deficit-spending. Among those corporate cuts is a new rule that would slash the tax rate from 39.6 percent to 25 percent for the types of businesses—known as pass-throughs—that Trump favors. His children would then inherit those profits tax-free thanks to Republicans’ plan to eliminate the estate tax.

Corporations in America are grouped into two major buckets for tax purposes. Those that pay the corporate income tax, and those whose profits are “passed through” to owners and taxed as individual income. The Trumps prefer the latter. Last year, Trump’s attorneys said that the president is the “sole or principal owner in approximately 500 separate entities” and that the profits from almost all of them are treated as individual income.

As individual income, Trump’s business profits that exceed $470,000 are currently subject to a 39.6 percent tax rate. That would drop to 25 percent if the House bill becomes law. Republicans say they’re doing that to benefit mom and pop businesses. But 86 percent of taxpayers with pass-through income are already in a 25 percent income tax bracket or lower—meaning most small business owners would derive no benefit from the special rate for pass-through companies.

Republicans aren’t giving the lower rate to everyone, but they probably are giving it to the Trump family, says Daniel Shaviro, a tax law professor at New York University. Under the Republican plan, any passive owner of a business gets the 25 percent pass-through rate for all profits. Shaviro says Trump should be able to prove he meets that criteria with a good tax lawyer. That will be particularly easy to do now that Trump is president, Shaviro says.

The pass-through cut alone would likely lower the Trump family’s tax bill by tens of millions of dollars. Trump could also benefit from Republicans’ plan to eliminate the Alternative Minimum Tax, a backstop against wealthy Americans reducing their tax liability to almost nothing. Without the AMT, Trump’s effective tax rate in 2005 would have been 4 percent. Instead, it was 24 percent, a $31 million difference.

Trump is rich enough—Forbes puts the president’s net worth at $3.1 billion—that he will be able to pass on the extra money to his children. Under current law, the share of that inheritance above $11 million would be taxed at a top rate of 40 percent. In practice, an estate planner will be able to help Trump avoid paying the full rate. But even if only half of Trump’s estate is subject to taxes, his heirs would owe roughly $620 million in estate taxes. Starting in 2024 under the Republican plan, Trump’s children would pay no inheritance taxes.

Had Republicans wanted to mitigate the impact of eliminating the estate tax, they could have scrapped or modified something known as “step-up in basis,” a tax provision that lets heirs avoid paying capital gains taxes. The appreciating assets that are exempted can range from a few stocks to a large residential tower in Manhattan. Republicans aren’t proposing any limits on this provision. As a result, Trump’s children would pay neither estate taxes nor capital gains taxes on their father’s assets.

For almost everyone else, the benefits are much smaller or nonexistent. The New York Times reported on Thursday that preliminary calculations show nearly 13 million tax filers who earn less than $100,000 per year would pay more taxes under the GOP bill. The cuts for most Americans would also get smaller every year because Republicans plan to use a more conservative model for increasing the income thresholds for each tax bracket. That will lead to more and more people falling into higher tax brackets each year.

If Republicans fail to renew a temporary $300 per adult tax credit they are proposing for five years, even more Americans will see their tax bills go up. David Kamin, a law professor at New York University who worked on tax policy in the Obama administration, estimates that a family with two kids could see their taxes increase by about $450 in 2027. The tax cuts for the Trump family and others in the top 0.1 percent, on the other hand, are expected to increase each year.