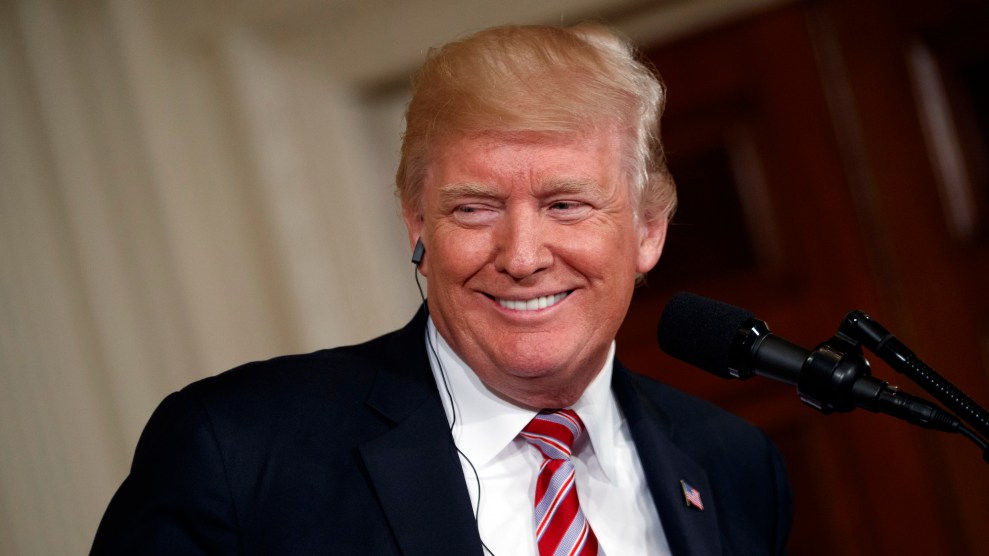 President Donald Trump is insisting that he won’t personally benefit from his new tax plan. That’s been obviously false from the start. Now a new analysis from the nonpartisan Tax Policy Center shows just how detached that claim is from reality.

TPC estimates that the plan would reduce total tax revenue by $2.4 trillion over the next decade. Republicans’ plan to eliminate some tax deductions would increase individual tax revenue by almost $500 billion over the next decade. But those gains would be wiped out by $2.6 trillion of business tax cuts. (Another $240 billion in losses would come from eliminating estate taxes on the share of inheritances exceeding $5.5 million for individuals and $11 million for couples.)

Republicans are trying to discredit estimates like TPC’s by arguing they vastly underestimate the amount of economic growth the GOP plan would create. But as Mother Jones has written, hardly any economists believe that. TPC also expects Republicans’ plan to have little effect on economic growth.

Trump and administration officials’ efforts to defend their plan are looking increasingly out of touch. On Thursday, Trump’s chief economic adviser Gary Cohn, who is worth hundreds of millions thanks to his years working at Goldman Sachs, said middle class Americans could use a $1,000 tax cut to buy a new car or renovate a kitchen. The day before, Trump attacked the Alternative Minimum Tax (AMT), a provision that blocks wealthy people from using loopholes to pay next to nothing in taxes. “You’re all familiar with it,” Trump said.

That seems unlikely. Almost no one who makes less than $200,00 per year pays the AMT. But we know Trump is intimately familiar with it. In 2005, the AMT cost him $31 million. Without it, he would have ended up paying $5.3 million in income tax on $150 million of income. Trump’s tax plan eliminates the AMT.