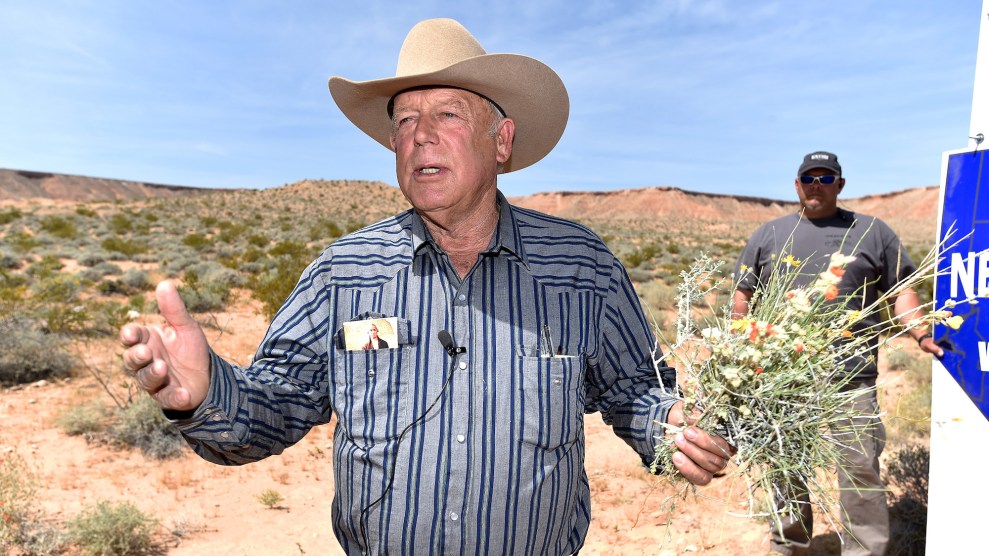 Cliven Bundy near his ranch in Bunkerville, Nevada, in 2015.David Becker/ZUMA

Opening statements start on Tuesday in the trial of Nevada rancher Cliven Bundy and three others involved in the 2014 armed standoff with federal law enforcement. As with the standoff itself, the Bundys’ criminal case has drawn an unusual and eclectic bunch of people to the defense team. Bundy’s four sons and most of the defendants charged in the case have been represented by court-appointed lawyers or federal public defenders, even though they deny the government’s authority. But they’re joined by an number of others purporting to represent the conservative land-use movement Bundy has come to embody, including an alleged Ponzi schemer, a birther, and a former white supremacist.

Here’s a rundown of the most colorful characters:

Larry Klayman: Klayman is a former Justice Department prosecutor and highly litigious conservative activist who is perhaps best known for his endless lawsuits against the Clinton administration in the 1990s, in which he subpoenaed a host of White House officials and deposed them about everything from their TV-watching habits to their traffic tickets. In 2014, Klayman filed a “deportation petition” against President Barack Obama, alleging that Obama was in the country illegally, having falsely claimed US citizenship.

Ever since his arrest last winter, Cliven Bundy has been petitioning the court to allow Klayman to represent him in his criminal case. But US District Court Judge Gloria Navarro has repeatedly denied Klayman’s and Cliven’s requests because Klayman still has unresolved disciplinary proceedings pending against him before the DC bar.

In June, the DC Court of Appeals Board on Professional Responsibility recommended suspending Klayman from practicing law for 90 days due to alleged conflicts of interest and interference with the administration of justice. The charges relate to a long-running dispute with Judicial Watch, the organization he founded in 1994 but has sued repeatedly since leaving in 2006. Klayman is appealing the disciplinary decision and has denied any misconduct. He’s also appealing Navarro’s decisions to bar him from defending Bundy all the way to the Supreme Court—for the second time.

He told Mother Jones that the high court didn’t have all the information about his disciplinary case in the first round, so he’s remedied that problem in his second filing. Klayman is still representing Bundy in civil litigation to obtain documents from the FBI and other federal agencies about the ranch standoff, and he has set up a legal defense fund for the rancher, though he won’t say how much he’s raised.

In the meantime, Bundy is being represented by a private Reno defense lawyer named Bret Whipple, whom he tried to fire in September, just weeks before the trial was scheduled to begin. The judge rejected that attempt, leaving Whipple scrambling to meet critical deadlines.

Roger Roots: Assisting Whipple as a paralegal, Roots is licensed to practice law in Rhode Island but lives in Montana, where last year he ran as a libertarian candidate for secretary of state. He serves on the board of the Fully Informed Jury Association, which trains potential jurors in the art of jury nullification—when a jury finds a defendant not guilty based not on his or her actions but because the juror finds the law at issue immoral or wrong. It’s become an issue in the Bundy case, as prosecutors have argued that defense lawyers will specifically push for jury nullification, as they have in the previous trials.

Roots is also a felon. Starting at age 18, Roots racked up a string of minor shoplifting and other criminal charges in Florida that led to a brief prison sentence. In 1992, he was arrested on felony weapons charges while at a community college in Wyoming that led to a 20-month prison sentence. After leaving prison, Roots tried his hand at politics in Montana. Using the alias “Roger Bell,” Roots volunteered on the 1994 reelection campaign of former Sen. Conrad Burns, until his true identity was disclosed and he was exposed as a white supremacist.

The Montana Human Rights Network has tracked Roots’ white supremacist activities since the early 1990s, when it first described him as an organizer for the Ku Klux Klan. Roots sued the group for libel and lost before a jury. In the legal proceedings, a district court described Roots as a man who:

has become well known by the general public as an ultra right-wing political activist. [He] authored a publication entitled Whites and Blacks 100 Facts (and One Lie), which is advertised for sale nationally. The publication lists facts about African-Americans, such as: blacks have low I.Q.’s due to small foreheads; they have never invented anything; and they are more likely to have syphilis than whites. [Roots] is a columnist in the Jubilee, wherein one of his columns states that the Holocaust was a hoax.

During a run for the US Senate in 2014 as a libertarian candidate, Roots told a local Montana paper that he’d turned away from white supremacism, saying it was part of his wayward youth. But in 2008, he had represented a notorious white supremacist, Rudy Stanko, who was being prosecuted on weapons charges in Nebraska.

Roots also was involved with the defense of Cliven Bundy’s son Ryan in a trial concerning his role in the armed takeover of the Oregon Malheur National Wildlife Refuge. The federal judge in the Oregon trial allowed Roots to sit at the defense table and consult with Ryan during the trial. But in Nevada, Navarro has not been so accommodating. Both Cliven and Ryan have asked the court to allow Roots to consult with them on legal matters inside the Nevada detention center where they’re being held. Navarro denied the request, noting that Roots is licensed to practice law only in Rhode Island and suggesting that the work he has done filing documents in Ryan’s defense may violate state licensing rules.

J. Morgan Philpot: A former Utah state legislator and tea party activist, Philpot is working pro bono for another of Cliven Bundy’s sons, Ammon, alongside his court-appointed attorney, Daniel Hill. Philpot has been an outspoken advocate of returning federally managed public lands to the states. In 2011, after announcing his entry into the Utah governor’s race, Philpot said that if elected, he would be willing to break the law to defy the federal government. “Am I going to go to jail if I do?” he said at a political rally. “I mean, if that’s what it’s going to take, does the federal government need to come down and throw some handcuffs on the governor of Utah?”

Philpot represented Ammon in his Oregon trial, as co-counsel with another Utah attorney named Marcus Mumford. Mumford is apparently not working for Ammon this time, probably for good reason. After the Oregon trial, when the judge announced that Ammon would remain in prison pending his trial in Nevada, despite being acquitted in Oregon, Mumford started shouting at the judge, at which point US Marshals tackled and tasered him. He was arrested and cited for failing to obey a federal court order. The charges were later dismissed, but an Oregon federal judge has since sought to bar Mumford from ever practicing in an Oregon federal court again.

Claud “Rick” Koerber: A Utah businessman and former radio host who calls himself the “Free Capitalist,” Koerber is married to the granddaughter of the late conservative author W. Cleon Skousen, giving him top-notch right-wing credibility. He first met the Bundys during their takeover of the Oregon wildlife refuge in 2016. He’s not a lawyer, but he worked on Ammon Bundy’s defense team during the Oregon trial as a paralegal for Philpot and Mumford. The arrangement was highly unusual, especially given that Koerber was also Mumford’s client in a criminal case.

In January, Koerber was indicted on charges that he was running a Ponzi scheme in Utah, bilking investors of $100 million, which he allegedly used to fix his teeth and buy expensive cars. He went on trial this fall, but the jury deadlocked on the charges and the case ended in a mistrial on October 16. Mumford represents Koerber in his criminal proceedings.

Prosecutors in Utah recently said they intend to retry Koerber, but that hasn’t kept him out of the Nevada courtroom. Oregonian reporter Maxine Bernstein tweeted last week that Koerber was in the back of the courtroom during jury selection for the Bundy trial. The judge reluctantly allowed him to use a computer in the courtroom to help with Ammon’s defense as long as he covered up the camera and microphone—which he did, with green sticky notes.

Ryan Bundy: Representing himself in the trial, Ryan Bundy has apparently been relying on a team of non-lawyers to assist him, including Roots and Shawna Cox, a Utah woman who was arrested during the Oregon wildlife refuge takeover and later acquitted along with Ammon and the other defendants.

Despite Ryan’s wish to represent himself, the judge has appointed standby counsel to assist him. Last month, Ryan tried to fire his original standby counsel, Angela Dows, saying she had been appointed against his will. Dows simultaneously tried to quit the case after receiving correspondence from Ryan she described as “repugnant.” Dows wouldn’t divulge the details in open court, citing attorney-client confidentiality.

In the “rescindation of finacal affidavit”[sic] Ryan filed withdrawing his request for court-appointed help, he wrote:

The judge ultimately allowed Dows to get off the case but denied Ryan’s request to go forward without standby counsel. She appointed a new lawyer to join him in court.