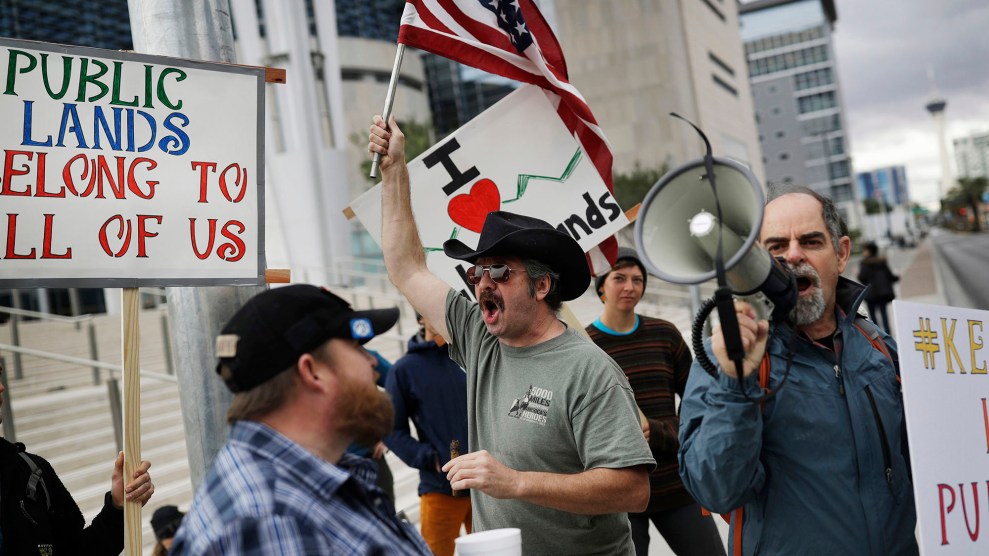 Supporters and critics of defendants on trial for charges relating to a 2014 ranch standoff at the federal courthouse gather in Las Vegas. A federal jury in Las Vegas is deliberating again in the retrial of four men accused of wielding assault weapons against federal agents in a 2014 standoff near the Nevada ranch of anti-government figure Cliven Bundy. Jurors returned to work Monday, Aug. 21, 2017, after spending a little more than two days last week going over five weeks of evidence in the case against four defendants. John Locher/AP

Prosecutors charged 19 people with crimes related to the 2014 armed standoff with the Bureau of Land Management at Bundy’s ranch. Court-appointed attorneys or public defenders have represented all of those people except Bundy himself. The federal tab for defending 17 of the 19 people charged in the case thus far is nearly $2 million, according to court records—and that figure is likely to go much higher, as the case still has two trials to go. Jury selection for the trial of Cliven Bundy, two of his sons, and one other defendant started this week.

“It’s a glaring irony, right?” says Ryan Lenz, a spokesman for the Southern Poverty Law Center, a nonprofit that tracks militia groups. “It’s not surprising that, facing many years in jail, the principles the Bundy family has held onto, antagonizing the federal government, goes by the wayside when their freedom matters.”

The right to a lawyer in a criminal case is enshrined in the Constitution. To make this right meaningful, the government funds the Federal Public Defender office to provide counsel to indigent defendants. The Nevada federal defender is representing Ryan Payne, a Montana militiaman on trial this week with Bundy and his sons. But the federal defender couldn’t represent all 19 defendants in the case, in part because one client’s defense might undermine another’s. So the court has appointed private lawyers to represent the other ranch defendants. Those lawyers are paid by the federal government, as stipulated in the Criminal Justice Act (CJA), and their fees are public record.

As of October 25, the federal government had spent $1.4 million on CJA attorney fees and nearly $430,000 on expert witnesses for Bundy ranch defendants. Cliven Bundy’s sons Ammon, Ryan, Melvin, and David account for nearly a quarter of a million dollars of the legal fees paid by the federal government in the case thus far. Ryan Bundy is officially representing himself in the case but has been provided with nearly $65,000 worth of court-appointed standby counsel services.

The ranch standoff got its start after the Bureau of Land Management attempted to impound Cliven Bundy’s cows, which have been illegally grazing on public lands for decades. Bundy owed the government more than $1 million in fees and fines for the grazing rights, but despite several court orders, he refused to pay, arguing that the federal government had no authority over him. Armed supporters came from all over the country to help Bundy and his family turn back the BLM, which abandoned the enterprise out of fear of significant bloodshed. The episode turned Bundy into something of a folk hero, at least until he made racist comments to reporters suggesting that “the negro” was better off in slavery.

Two years after the standoff, Bundy, his sons, and 14 others involved in the episode were finally arrested and charged with federal weapons and conspiracy offenses that threatened to put them in prison for a long time. Supporters have set up legal defense funds and held fundraisers on their behalf, including one this summer that was attended by longtime Donald Trump confidant Roger Stone. But the defendants’ near-universal use of federally funded lawyers suggests that the Bundys’ financial support may not be as deep as they’d like to believe.

Their legal bills are substantial, and their long pretrial incarceration has hampered their ability to earn a living to pay them. The Bundy family and the other defendants have spent more than 600 days behind bars waiting to go on trial—an exceedingly long time that their lawyers have argued violates their due process rights, as well as the federal Speedy Trial Act that is supposed to check such long detentions. As a result, the Salt Lake Tribune reported, the Bundy ranch is now being run by the youngest of Cliven’s children, Arden, a teenager who graduated from high school early last year to run the ranch after all the other men in the family were arrested.

Ammon Bundy, who owns an Arizona company that services semitrucks, had a private attorney representing him in Oregon last year, when he was tried—and acquitted—on charges related to his takeover of the Malheur National Wildlife Refuge. But it seems his funds have dried up, and he’s now got court-appointed counsel. Ryan Bundy has tried to fire his court-appointed standby counsel, saying he didn’t want such a lawyer, but the judge denied his request.

The court-appointed lawyers have done a pretty remarkable job for the Bundy ranch defendants, given the weight of the evidence against them. The first group of six defendants, whom the government considered less culpable in the case because they were not the organizers of the standoff, went on trial in April. The government had charged them with assault, threatening a federal officer, and using a firearm during a crime, with potentially long prison sentences. That group included Erik Parker, an Idaho electrician known as the “Bundy sniper” after he was photographed lying prone on a highway overpass with a semi-automatic weapon pointed toward federal officials trying to round up Bundy’s cattle.

Two of the six men were convicted, including one who was an FBI informant, in large part because of video footage collected by FBI agents who masqueraded as documentary filmmakers and recorded the defendants making incriminating statements after the standoff. But the jury couldn’t come to a decision on Parker and the other three men in the group, and the judge declared a mistrial. Those four were tried again this summer, but in August, a different federal jury acquitted two of them on all charges. The jury acquitted Parker and another man, Scott Drexler, on some charges, but was unable to decide on the others. Once again, the government recharged Drexler and Parker, and they were set to go on trial for a third time this month, along with Cliven, Ammon, and Ryan Bundy. But on October 23, Drexler and Parker each pleaded guilty to a single misdemeanor charge of obstructing a court order, and they will not serve any more time behind bars.

The federal government paid more than $850,000 in legal fees for those six defendants. The total legal bills are likely to soar much higher. There are still two more trials to go. Jury selection in the trial of Cliven, Ryan, and Ammon Bundy and Ryan Payne started Monday, and the remaining defendants will head to court when that trial wraps up.