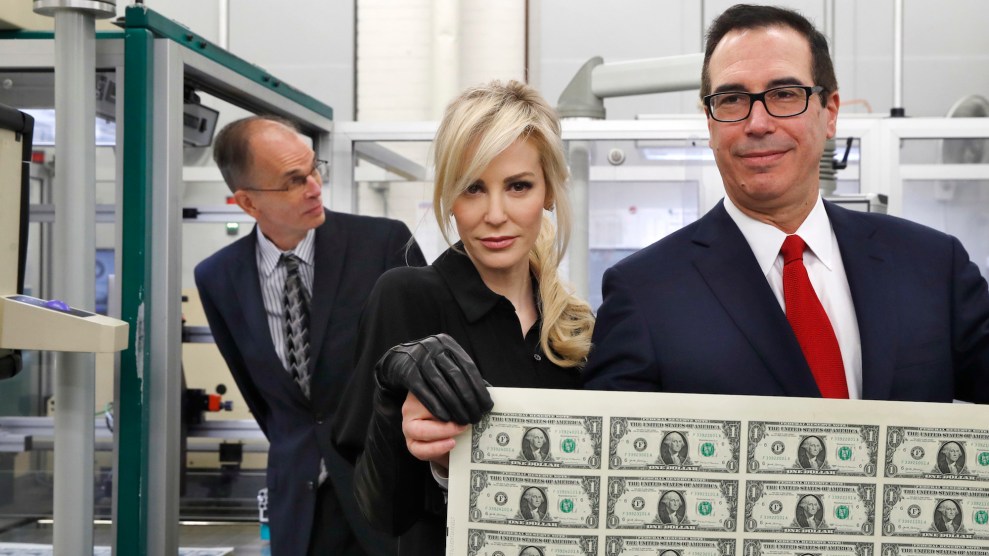 Treasury Secretary Steven Mnuchin and his wife, Louise Linton, hold up a sheet of new $1 bills in November bearing his signature.Jacquelyn Martin/AP

Late Tuesday evening, Senate Republicans released a new version of their tax bill that makes their priorities abundantly clear. Under the newly-revised Tax Cuts and Jobs Act, individuals will lose essentially all of the benefits provided by the bill in 2026, while corporations get a massive, permanent cut. On top of that, about 13 million Americans would lose their health insurance because the bill now repeals Obamacare’s individual mandate.

The updated bill, which the Senate finance committee is expected to approve this week, cuts the corporate tax rate from 35 percent to 20 percent starting in 2019, while providing most individuals with temporary tax relief. If the individual cuts expire, a preliminary estimate from Ernie Tedeschi, a former Treasury Department economist, shows that 38 percent of taxpayers—including 50 percent of people making between $50,000 and $75,000—would pay more taxes in 2027. And that doesn’t include the fact that many Americans would be paying about 10 percent more for health care as a result of getting rid of the Obamacare mandate.

Republicans will almost certainly argue that they don’t actually plan to let the individual cuts expire—essentially conceding that it’s just an accounting trick designed to keep the bill’s cost under their self-imposed limit of $1.5 trillion of deficit-spending over the next 10 years. But Republicans have already changed their story on taxes many times, and there’s reason to be skeptical about whether they’ll follow through.

Even with the corporate tax cut effects added in, about 38% of filers face a tax hike in 2027 versus current law. Without the corporate cuts, that rises to 72%. /18 pic.twitter.com/vFnGyC8ZHn

The last-minute amendments from Sen. Orrin Hatch (R-Utah), the chairman of the Senate committee in charge of writing the tax bill, are designed to make the bill comply with a Senate provision, known as the “Byrd Rule,” that requires 60 votes for legislation that adds any money to the deficit after 10 years. The revenue estimate from the Joint Committee on Taxation, a nonpartisan Congressional body, suggests the bill now follows the Byrd Rule, which means it could pass with 50 votes, plus a tie-breaking vote from Vice President Mike Pence.

Between 2018 and 2027, the Republican bill uses a raft of gimmicks to keep their bill from adding more than $1.5 trillion of deficit-spending. One of those gimmicks delays about $150 billion of corporate tax cuts by one year. The most important trick makes all of the individual tax cuts expire after eight years. As a result, the JCT projects that individual tax revenue would be $75 billion higher in 2027 than under current law, while corporate revenue would fall by $45 billion. After factoring in gimmicks, the nonpartisan Committee for a Responsible Federal Budget estimates that the real 10-year cost of the bill would be $1.9 trillion. Below is a table CRFB made to highlight their calculations.

Despite the individual cuts being temporary, Senate Republicans want to permanently switch to a new inflation measure, known as “chained CPI,” that will gradually bump middle-class families into higher tax brackets. That change alone will increase Americans’ taxes by $31 billion in 2027.

Future members of Congress would face immense political pressure to renew the individual cuts when they expire at the end of 2025. But recent experience shows there’s no guarantee the cuts would be made permanent. Between 2009 and 2012, working families benefitted from a $400 per person tax credit followed by a payroll tax cut that provided about $1,500 to middle-class taxpayers. In 2011, now-Speaker Paul Ryan (R-Wis.) opposed extending the cut, saying it was a temporary provision that “simply exacerbates our debt problems.” Ryan added that temporary cuts “are proven not to work.” In 2013, Congress opened the new year by letting the payroll tax cut expire.

When Republicans’ temporary cuts come up for consideration in 2025, America would be facing unprecedented debt-levels that have been made worse by permanent corporate tax cuts. David Kamin, a tax law professor at New York University, projects that the annual deficit would be $1.4 trillion in 2025, up from about $700 billion today. The Senate bill asks Americans to trust that Republicans will continue their current stance of ignoring the national debt—as opposed to their Obama-era concerns about rising deficits—and extend tax cuts for individuals. If Republicans extend the cuts, the deficit would rise to nearly $1.7 trillion in 2027, according to Kamin’s analysis.

56 percent of registered voters think Trump will benefit, while only 29 percent think they will.

Republicans have already shown they’re willing to break tax promises. Before the House and Senate released their tax bills, Treasury Secretary Steven Mnuchin said there would be no tax cuts for the rich. After Republicans proposed giving most of the benefits to the wealthiest Americans, Mnuchin admitted that the rich would get a tax cut. But he said that was just because it was “very hard” to avoid cutting taxes for the wealthy. Republicans also initially said everyone in the middle class would get a tax cut. After Congress’ own number-cruncher found that millions would pay more taxes, Senate Republicans back-tracked and started focusing on the fact that each income bracket would get a tax cut on average.

Americans already doubted Republicans’ tax rhetoric before the Senate amended its bill. A poll from Morning Consult released on Wednesday finds that 56 percent of registered voters think President Donald Trump will personally benefit from his tax plan, while only 29 percent think they and their families will benefit. Another poll released Wednesday by Quinnipiac University finds that independents believe, by a 2-to-1 margin, that Republicans’ tax plans favor the rich at the expense of the middle-class. Overall, Quinnipiac reports that only a quarter of voters support the tax cuts.

If the Senate bill becomes law, Americans would have to wait until 2025 to see if Republicans change their minds on taxes again. In the meantime, millions of Americans would lose health insurance as people with people with preexisting conditions pay increasingly more for coverage. At a Senate hearing on Wednesday, Sen. Debbie Stabenow (D-Mich.) summed it up as a “one-two punch to middle-class families.”