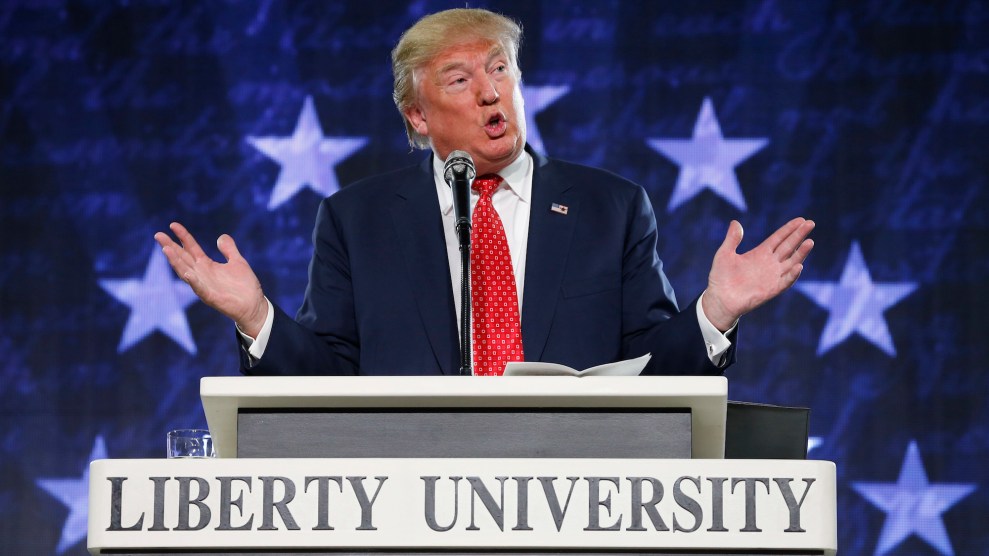 Donald Trump speaks at Liberty University during the 2016 presidential campaign. As President, Trump has tried to make it easier for churches to endorse political candidates.Steve Helber/AP

Few adolescents who’ve sat through homilies would accuse priests or rabbis of lacking material. House Republicans beg to differ. Under their tax bill, religious institutions—and all nonprofits—would be able to endorse politicians for the first time since 1954.

The House tax cut plan would repeal a tax provision, known as the “Johnson Amendment,” that blocks churches and other nonprofits from electioneering. The Joint Committee on Taxation (JCT), a nonpartisan Congressional body, expects that this change would lead to billions of dollars of political-spending being routed through nonprofits that can collect tax-deductible contributions without disclosing their donors. As a result, mega-donors like the Koch brothers would likely get tax write-offs for funding television ads and get-out-the-vote operations.

Hardly any churches and nonprofits support the move, which watchdog groups warn could easily become the next Citizens United, the 2010 Supreme Court decision that opened the door to unlimited corporate political spending. The Senate tax bill leaves the Johnson Amendment in place, but that could change as the two chambers reconcile the differences between their bills.

The JCT predicts that the loophole will lead to an explosion of tax-deductible donations that would cost the government between $400 and $500 million per year in lost tax revenue. The government does not reimburse donations dollar for dollar—meaning the political spending could be four times higher than what the government loses in revenue, according to the National Council of Nonprofits. In other words, nonprofits would take in up to $2 billion of political donations per year. The Center for Responsive Politics, a campaign finance group, estimates that all federal elections in 2016 cost nearly $6.5 billion. (The House bill would reinstate the Johnson Amendment in 2024 for budgetary reasons, but Republicans would likely push to extend it.)

Republicans, including Majority Whip Steve Scalise (R-La.), the third-ranking Republican in the House, consider the Johnson Amendment to be an unjustified limitation on churches’ free speech rights. In February, Scalise co-introduced the Free Speech Fairness Act, a bill that would grant nonprofits the ability to endorse candidates and spend money supporting them with ads and voter turnout campaigns. Scalise’s legislation and the tax bill would continue to block them from directly donating to candidates or political action committees. In May, President Donald Trump signed an executive order that directs the Treasury Department to leniently enforce the Johnson Amendment, which Trump incorrectly claims was equivalent to getting rid of it.

As proof that churches’ freedom of speech is threatened by current rules, Scalise points to the Church at Pierce Creek, a New York church that lost its nonprofit status over two decades ago. Amanda Tyler, the executive director of the Baptist Joint Committee for Religious Liberty, which works to defend the separation of church and state, says that case shows how much nonprofits can already do in the political realm. Under current law, nonprofits can say just about anything just as long as they don’t tell people who to vote for. Nevertheless, the Church at Pierce Creek took out a full-page ad in USA Today four days before the 1992 presidential election that asserted, “Bill Clinton is promoting policies that are in rebellion to God’s laws.” It concluded, “How then can we vote for Bill Clinton?” In 1995, the IRS revoked the church’s nonprofit status.

In theory, the House bill would limit nonprofit political spending by requiring that any political spending be part of the organization’s “customary activities” and lead to only “de minimis” spending. But the bill provides no definition of what constitutes minimal spending, and some political speech is unlikely to generate any expenses. Take televangelist Pat Robertson, the founder of the nonprofit Christian Broadcasting Network, who has linked 9/11 to abortion. If the House bill becomes law, it would be difficult for the IRS to block Robertson from doling out endorsements. He’s on the air either way.

Even if the limits were clear, Rick Cohen, the nonprofit council’s communications director, says the IRS has “very little capacity” and even less political will to start telling preachers what they can and can’t say. Simply auditing liberal and conservative political groups—not churches—provoked a furious backlash on the right in 2013. Amanda Tyler warns that enforcing the proposed limits could entangle church and state by requiring the IRS to go through a church’s books to see how much they’re spending on politics.

Religious groups also fear that repealing the amendment would further divide parishioners. Nearly 90 percent of evangelical leaders say pastors should not endorse politicians from the pulpit, according to a February survey by the National Association of Evangelicals, which represents more than 45,000 churches. The group’s president Leith Anderson said most of his fellow pastors “want to focus on teaching the Bible,” not endorsing politicians. No denominational groups have come out in favor of repeal, Tyler notes.

Secular nonprofits are similarly opposed. In September, more than 5,500 organizations, including the Girl Scouts and Goodwill, told Congress to keep the Johnson Amendment in place. The groups argued that it’s already easy for them to advocate for legislation, and that repeal would undermine their nonpartisan reputations. Churches and nonprofits also fear that politicians would not-so-subtly demand an endorsement in exchange for favorable treatment. Today, nonprofits can simply say they’re not allowed to be involved in partisan politics. And Americans seem to like it that way. A March poll found that 72 percent of people support the current limits, while only 21 percent oppose them.

Tyler says the change is being pushed by “just a couple” of interest groups like the Alliance Defending Freedom and the Family Research Council, two right-wing Christian groups. But after its repealed, everyone agrees that the effects would extend far beyond those groups. Emily Peterson-Cassin, a project coordinator at the watchdog group Public Citizen, says repeal would “reshape the whole landscape” for campaign spending, and create a “huge avenue of abuse” as new groups spring up to take advantage of the new rules. Peterson-Cassin notes that even in a “magical world” where the IRS was committed to enforcing the new status quo, minimal spending could wind up being 5 or 10 percent of a charities expenses. “That’s billions of dollars,” she adds.

Along with interest groups, the other beneficiaries will be politicians and their funders. The Koch brothers can already spend unlimited money to influence elections. If the House bill becomes law, they’d be able to keep doing that while collecting hundreds of millions of dollars in taxpayer subsidies. All to fix a free-speech issue that the vast majority of religious leaders don’t think exists. Tyler says there’s no substance to the claim that priests are living in fear of violating the current rules. “The reality just doesn’t reflect that story,” she adds. “I find that pastors feel incredibly free.”