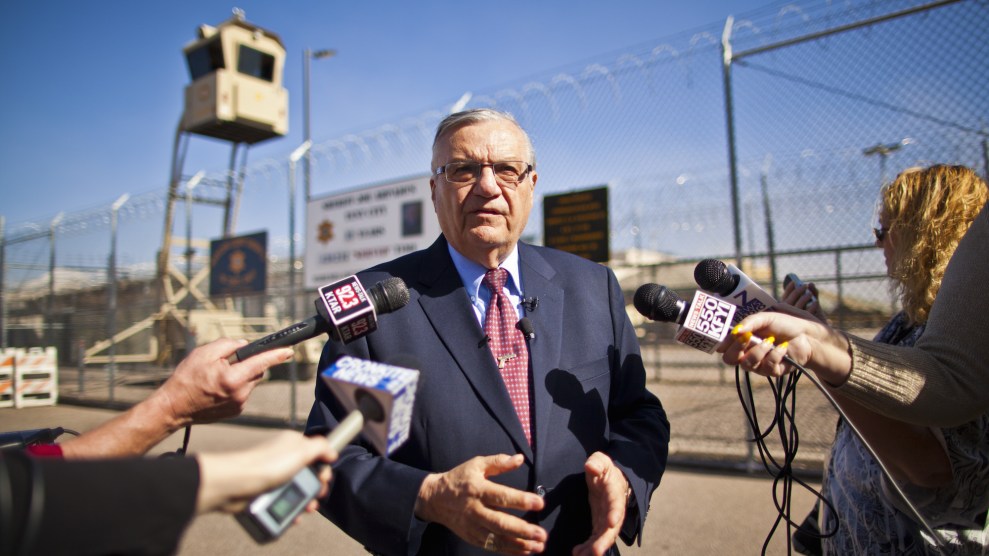 Last Friday, two days before a gunman killed at least 58 people in Las Vegas, former Maricopa County Sheriff Joe Arpaio schooled a crowd of California Republicans on the benefits of having a heavily armed citizenry. “Most of the time, the cops get there a little late and [the shooter] wipes everybody out,” he said. “So what’s wrong when a private citizen who has a concealed weapon and sees that happening…takes action?”

Sheriff Joe was in Fresno, California, at the invitation of the Fresno County Republican Party, for their annual fundraiser. As the keynote speaker for the event, billed as a celebration of the 1st and 2nd amendments, a crowd of 300 or so—many of California’s most passionate and influential far-right conservatives—had come out to the Sunnyside Health and Tennis Club to see Sherriff Joe in action. The tipsy crowd cackled at his gun comments.

“Why is everybody laughing?”Arpaio asked, caught off guard. He referred to a mass shooting in Colorado in 2015, after which the sheriff had urged 250,000 gun-carrying Arizonans to take action against would-be mass shooters, and said, “my point is that law enforcement can’t go at it alone. So that’s why I say build up the posse.”

“My point is that law enforcement can’t go at it alone. So that’s why I say build up the posse.”

The Fresno County GOP’s decision to host Arpaio at their fundraiser was highly controversial, even among conservatives. After he was convicted for violating a court order dictating that he and his Maricopa County, Arizona, sheriff’s department stop arresting predominantly Latino people solely on the belief they were in the country illegally, Arpaio was pardoned by President Donald Trump on August 25. Since then, Arpaio has announced a sort of comeback tour. He told San Jose Mercury News, “I’m not going away.” He told the Denver Post that he plans to make more speeches and even write a book. Though it isn’t clear if Arpaio was paid for his appearance in Fresno, his presence meant the evening was a lucrative one for the Fresno County Republican Party. The event was sold out, with tickets going anywhere from $60 to $1500, the room was beyond capacity, and donors from all over the state spent several hours driving across great swaths of California to Fresno, all for the privilege of seeing Sheriff Joe with their own eyes.

Other prominent Republicans weren’t quite as excited, especially as the GOP tries to shake off its image as anti-immigrant and recruit Latinos (as of September 2017, nearly 80 percent of Latinos had a negative view of Trump). Some local Republican officials, including Fresno city’s mayor, Fresno County’s sheriff, and several other local officeholders, declined to attend. Mike Madrid, a California Republican political strategist who’s spent his career trying to convince the state’s Latinos to vote Republican, called Arpaio’s appearance “an unmitigated disaster.”

But none of that seemed to bother the attendees of this year’s fundraiser. If anything, it energized them. As did the three layers of security checkpoints provided by private contractors and the Fresno Police Department, to keep a moderately sized crowd of protestors far outside Sunnyside Health and Tennis Club’s perimeter.

Inside, Republican donors enjoyed sociable drinking and mingling around the tennis club’s interior lawn. The temperature was pleasantly warm, and the evening’s conversation ranged from local Valley water politics and wasteful state spending on a high speed rail project, to the supposed 1 million fraudulent votes cast in the last election by “illegals” in Los Angeles County. The almost exclusively white donors paused only to refill their cocktails, and when the police helicopter circling around the nearby protest demonstration passed directly overhead.

In a banquet hall, dinner was served: a plate of enchiladas and chile verde. As a man—a middle school principal—said when he sat down at his table: “They bring in Mexican food catered by Central Americans to the Republican thing that is honoring Arpaio who’s supposed to be anti-Hispanic? That’s awesome.”

“They bring in Mexican food catered by Central Americans to the Republican thing that is honoring Arpaio who’s supposed to be anti-Hispanic? That’s awesome.”

Close to the room’s entrance was a table packed with prizes that would be raffled off throughout the evening, including a 40 inch Samsung TV, lunch for two with the local county sheriff, and a one-year membership to a local shooting range.

To thunderous applause and a standing ovation, America’s Toughest Sheriff ascended to the podium, flanked by two bodyguards and two Fresno police officers.

He declared that the authenticity of former President Obama’s birth certificate was still worth investigating. He said that even though he’d been maligned as a “racist,” and Tom Perez, chairman of the Democratic National Committee, had called his invitation to the event “shameful,” the Fresno County GOP’s choice to host him was “a badge of honor.” Though he did not ask for the Presidential pardon, he said, he was grateful he had received it, and he pledged his loyalty to Trump.

If he had any say in the matter, he added, he would put DACA recipients—the so-called 800,000 undocumented youth known as “Dreamers”—“on an airplane” back to their home country, and “fast track them back” through an expedited immigration process.

When Arpaio returned to his seat, the only remaining business was to raffle off the Samsung television. A mustached man who won lunch with the Fresno County Sheriff earlier in the evening expressed his enthusiasm that the top cop could sign his Carrying a Concealed Weapon permit forms. “This is great,” he said. “I can get her to sign off on my CCW!”