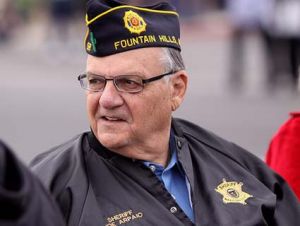 Arizona Sheriff Joe Arpaio, who was accused by the Justice Department of presiding over a culture of anti-Latino discrimination in the Maricopa County Sheriff’s Office last week, offers his take on what violating someone’s civil rights looks like:

Likewise, the sheriff denied unlawfully targeting critics for arrest during political protests. “We don’t go after anybody,” he said. “Actually, they go after me. They’re demonstrating in front of my building, calling me every kind of name. If you want to talk about civil-rights violations, what about that?”

Has a statement more symbolic of runaway right-wing victimhood ever been uttered? It’s all there, the lack of empathy, the narrative of persecution, the ludicrous sense of self-pity, even the comically distorted understanding of the law. Naturally, the statement also actually helps confirm what Arpaio’s critics are accusing him of—any sheriff thin skinned-enough to think it’s illegal to call him a name is probably also enough of a megalomaniac to arrest people for criticizing him.

Just to reiterate though: This is a man whose most celebrated public gestures included forcing inmates to wear pink underwear so as to humiliate them. The Justice Department’s report describes his office as systematically discriminating against Latinos as part of a crusade against illegal immigration, even at the cost of investigating serious crimes; running a jail where Latino inmates were punished by being denied basic services if they could not speak English; and retaliating against his critics using the powers of his office. But when it comes to himself, Arpaio sees name-calling as a violation of his civil rights.