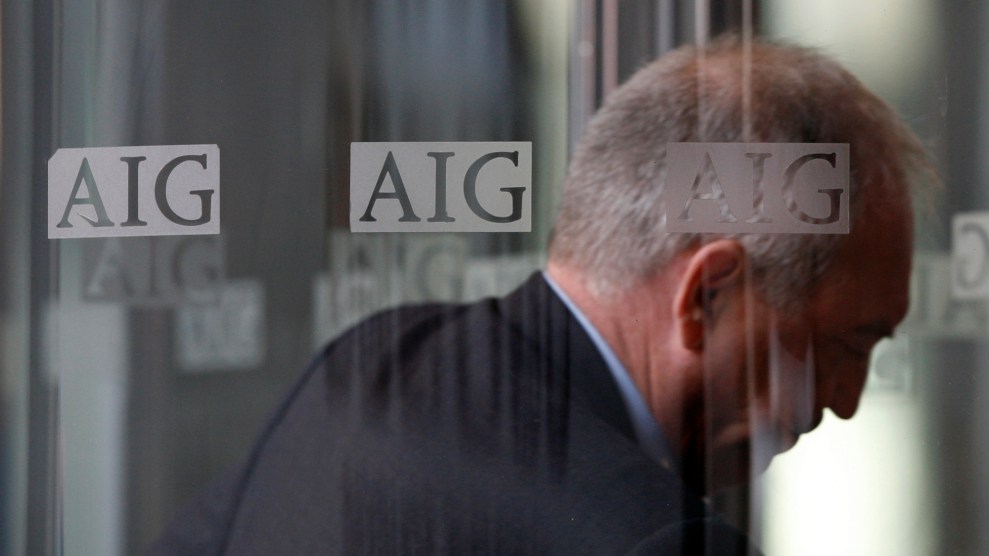 AIG helped crash the economy in 2008. The feds just lifted key rules intended to prevent the company from doing it again.Mark Lennihan/AP

The Trump administration on Friday rolled back key regulations on one of the Wall Street firms responsible for the 2008 economic collapse—a move that could result in a huge windfall for a billionaire former White House adviser.

In a 6-to-3 vote, the Financial Stability Oversight Council (FSOC), which is chaired by Treasury Secretary Steven Mnuchin, declared that insurance giant American International Group (AIG) should no longer be considered a “too-big-to-fail” institution that could trigger a wider economic catastrophe if it went under. That means AIG will no longer be subject to a host of federal regulations and oversight of its internal practices and acquisitions. The FSOC vote was announced after markets closed Friday but is expected to provide a major boost to the company’s stock.

That’s a big win for Carl Icahn, the irascible billionaire, who is reportedly AIG’s fourth largest shareholder and one of America’s wealthiest investors. Icahn is also one of Trump’s biggest supporters and previously served in the administration; he left his post last month as a special adviser to the president on regulatory reform.

In his eight months advising the White House, Icahn made headlines mostly by attempting to change an environmental rule in a way that would benefit an oil refinery he was heavily invested in. Icahn, who is 81, made his money as a shrewd and ferocious negotiator, but this time, his efforts failed. The rule he loathed survived (at least for now), and his crusade against the policy is what reportedly led to his departure—which came just before the publication of a New Yorker article outlining Icahn’s conflicts of interest. The magazine dubbed his short stint advising Trump as “Carl Icahn’s failed raid on Washington.”

Icahn lobbied Trump to choose Mnuchin to run the Treasury Department, which Trump ultimately did. Now it is Mnuchin who is returning the favor for Icahn. The vote to remove AIG’s designation as a “systemically important financial institution,” or SIFI—Washington-speak for too big to fail—could free up the company to grow and acquire other businesses down the road. In effect, it eliminates the checks that have kept AIG in line since the crisis and that have helped prevent another similar financial meltdown. One insurance industry expert told me that the move could boost the company’s stock price by as much as 10 percent. AIG’s current market value is $55 billion. That could mean a bump of as much as hundreds of million dollars for Icahn’s stake in AIG.

For months, the Trump administration has weighed whether to free AIG from the SIFI rules that were imposed because of its role as one of the central villains of the financial crash. The company at one point had more than $1 trillion in assets on its books and 76 million customers worldwide. But the byzantine financial products AIG peddled to customers around the world and its failure to prepare for what might happen if those products went belly up magnified the crisis from a two-alarm to a four-alarm fire. The company ultimately needed a $182 billion bailout from the federal government to survive.

In the post-crash wave of reforms aimed at the banking and finance industries, lawmakers and regulators in Obama’s Washington slapped AIG with the SIFI label, meaning that AIG was forced to let regulators monitor the company from the inside, seek the Federal Reserve’s approval for new acquisitions, and hold more of its own capital to protect against future losses and potentially the next financial crisis.

AIG repaid its bailout funds in 2013 and emerged from the crash as a smaller, leaner company, having sold off about half of its holdings. A shadow of its former self, AIG struggled mightily to reclaim its former stature, and in recent years private investors have pushed for wholesale changes—new leadership, spinning off certain divisions—to restore AIG’s profitability.

One of those investors has been Icahn. In 2015, he revealed that he’d taken a large stake in AIG, and he pushed for the company to split itself into three smaller businesses—the thinking being that smaller entities would increase profit margins and also help AIG convince regulators to release it from the SIFI regulations. It was only after the Trump administration had taken over that Icahn seemed to relent in his campaign to downsize AIG—an indication perhaps that he thought AIG, with Trump in power, might be able to escape the designation without splitting itself up. The issue instead became how the company could convince Mnuchin and other Washington regulators to remove AIG’s too-big-to-fail label.

It’s unclear whether Icahn, who didn’t respond to a request for comment, personally lobbied the administration to remove the SIFI designation. But he certainly would have had the access to do so. He and the president have a history: When Trump’s Taj Mahal casino in Atlantic City was on the rocks, Icahn bailed him out by buying up the casino’s outstanding debt. Trump and Icahn weren’t exactly friends, but Icahn endorsed Trump’s presidential bid early on and stuck with him throughout the many ups and downs of the campaign. In announcing Icahn’s role as a special adviser to the president, Trump hailed him as “one of the world’s great businessmen” who had been “with me from the beginning.”

Apart from Trump, the person Icahn most needed to convince on AIG was Mnuchin, and few people would have been better placed to do so. During the transition period last winter, Icahn pressed then-President-elect Trump to pick Mnuchin, a banker and movie producer, to run Treasury. Icahn described Mnuchin as a “good friend.”

“Spoke to @realDonaldTrump,” Icahn tweeted on November 15. “Steve Mnuchin and Wilbur Ross are being considered for Treasury and Commerce. Both would be great choices.”

1/2 Spoke to @realDonaldTrump. Steve Mnuchin and Wilbur Ross are being considered for Treasury and Commerce. Both would be great choices.

Icahn told Fox Business two days later that he had “urged” Trump to “consider” Mnuchin for Treasury. “I’m not the one to announce it,” Icahn added, “but I do believe that he will get the job.” Two weeks later, Trump announced that he would indeed appoint Mnuchin. And shortly after that, Trump brought Icahn himself into the fold, naming him a special adviser on regulatory reform. Icahn, in other words, had the inside track.

If Icahn was looking for help in getting a favorable ruling on AIG, Mnuchin was a very good friend to have. (Despite vocal objections by various Democratic senators, Mnuchin was confirmed in February.) The Treasury secretary chairs FSOC, a group of 10 regulators and financial experts charged with overseeing the health of Wall Street and other financial markets. Among other roles, FSOC is supposed to ensure that no financial firm gets so big it can wreck the economy (again). It was FSOC that voted in 2013 to make AIG a systemically important financial institution. And only FSOC had the power to remove that label and the safeguards that came with it. FSOC’s ten members are currently a mix of Obama holdovers such as Richard Cordray, the director of the Consumer Financial Protection Bureau, and Trump nominees such as Mnuchin and SEC Chairman Jay Clayton. But it was Fed Chairwoman Janet Yellen who was largely seen as the decisive vote in the AIG decision, giving the company the two-thirds majority vote it needed. (Clayton recused himself from the vote because the law firm he previously worked for represented AIG.)

In the lead-up to the vote, the financial press reported that the Treasury Department was strongly considering removing AIG’s too-big-to-fail label. A source with knowledge of FSOC’s deliberations recently said that Mnuchin and his staff had long been in favor of such a move and had been working to gather the necessary votes.

The question looming over all of this is: Did Icahn play a role in pushing his “good friend” Mnuchin and others in the Trump administration to act favorably toward AIG?

On July 27, Sens. Elizabeth Warren (D-Mass.) and Sheldon Whitehouse (D-R.I.) sent a letter to Mnuchin asking that very question. “There is ample evidence that Mr. Icahn will not hesitate to discuss and advocate for positions that benefit him personally,” the senators wrote. They went on to question Mnuchin about whether Icahn had communicated with anyone on FSOC:

The senators asked for answers by mid-August. A spokeswoman for Warren says Mnuchin and his staff still have not responded.

I posed the same questions about Icahn, FSOC, and AIG to a Treasury spokeswoman this week. There was no response.