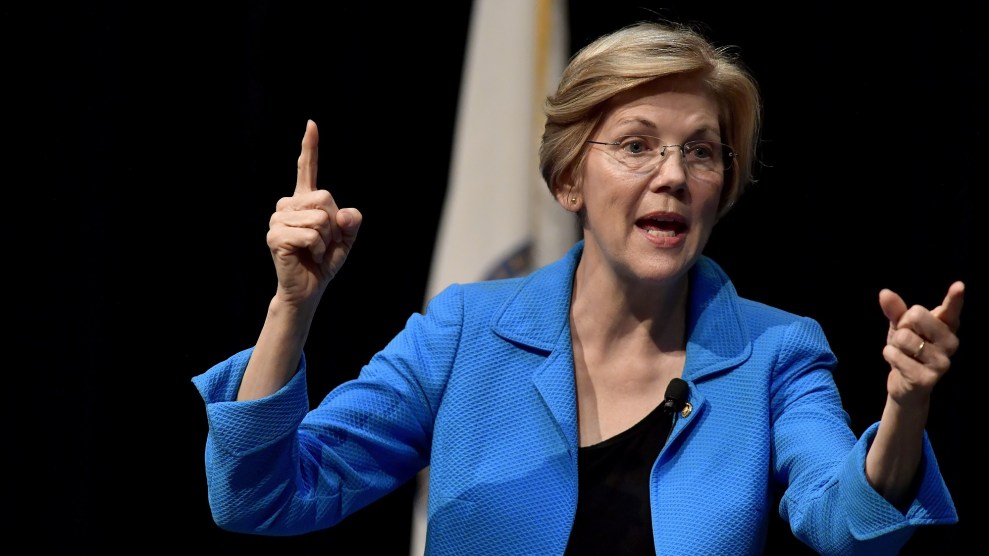 Sen. Elizabeth Warren holding a town hall in August in Concord, Massachusetts. Warren has been a strong opponent of the arbitration clauses used by companies including Equifax.FEREX/AP

Equifax, one of the three major consumer credit reporting companies, announced on Thursday that hackers may now have the personal information of 143 million US consumers. Among the data stolen in what is being described as the most severe hack in years are names, dates of birth, addresses, and social security numbers.

But there may be a small upside for consumers: Thanks to the hack, a rule that protects people’s right to sue companies like Equifax has suddenly been thrust back into the spotlight just as the Senate is set to vote on whether to eliminate it. In July, the Consumer Financial Protection Bureau, the consumer watchdog agency created by Congress in 2010, issued a regulation preventing credit card and other financial service companies from forcing customers who have legal complaints to submit to binding arbitration hearings instead of pursuing class-action lawsuits. It’s set to take effect in March 2018.

The financial service industry strongly opposes the new CFPB rule; Equifax is one of many companies that have lobbied on the rule, according to disclosure forms. (Those forms don’t make clear precisely what position Equifax took on the matter.) Mandatory arbitration clauses favor corporations for a number of reasons, including the fact that arbitrators are usually hired by the company and the decisions are often private, which prevents others from learning about abuses. They often require hearings to be conducted individually rather than as part of a massive class action as well. Few individuals have the resources to take on major corporations on their own, and the individual rewards may be too small to make it worth going into arbitration. Proponents of arbitration say class-action lawsuits mostly serve to help trial lawyers.

Before the August recess, the House of Representatives voted to block it. All but one Republican voted for repeal, while all Democrats voted against. It is now up to the Senate to decide whether the rule should remain in effect.

That’s where the Equifax hack comes in. As part of its damage control effort, Equifax is offering a free one-year subscription to its TrustedID Premier credit monitoring and identity theft protection service. That service happens to have a mandatory arbitration cause attached to it. Initially, many, including New York Attorney General Eric Schneiderman, interpreted it as a brazen attempt to take away people’s right to sue Equifax for the data breach.

That does not appear to be the case. Equifax has since updated an FAQ to explain: “The arbitration clause and class action wavier included in the TrustedID Premier Terms of Use applies to the free credit file monitoring and identity theft protection products, and not the cybersecurity incident.” The company also added an opt-out provision to its arbitration clause following the backlash. After the new language appeared, Schneiderman wrote on Twitter that Equifax had “clarified its policy,” adding that his office is “continuing to closely review.”

Regardless, the new CFPB rule would bar such clauses, and the backlash against Equifax has given new momentum to Democrats’ efforts to protect the regulations. “If Equifax is genuine about wanting to protect customers, it must remove forced arbitration immediately from TrustedID and any other services offered to victims of the data breach,” Sen. Sherrod Brown (D-Ohio) said in a statement earlier on Thursday. “This is just one more example why the Consumer Financial Protection Bureau’s rule banning forced arbitration is badly needed to protect the rights of working Americans.”

The @CFPB's new rule would stop companies like @Equifax from avoiding legal accountability like this — as long as @GOP doesn't reverse it.

GOP efforts in the Senate to repeal the rule were already looking shaky, even before the Equifax hack. In August, Sen. Lindsey Graham (R-S.C.) said he would not support eliminating the arbitration rule, and Sens. Susan Collins (R-Maine) and John Kennedy (R-LA) said they were undecided. The attention on Equifax’s use of arbitration further decreases the chances that Senate Republicans will repeal the rule. “The optics of this situation change the congressional calculus regarding the arbitration CRA and lessen the likelihood of reversal,” Isaac Boltansky, an analyst at Compass Point Research & Trading, told American Banker on Friday.

The CFPB’s arbitration rule is one of the first successful attempts to push back against the dramatic rise in mandatory arbitration in recent years. “[Arbitration] is among the most profound shifts in our legal history,” William Young, a federal judge in Boston, told the New York Times in 2015. “Ominously, business has a good chance of opting out of the legal system altogether and misbehaving without reproach.”

The Supreme Court ruled in 2013 that forced arbitration agreements were legal regardless of whether they prevent customers from stopping abuse. “The monopolist gets to use its monopoly power to insist on a contract effectively depriving its victims of all legal recourse,” Justice Elena Kagan wrote in her dissent.

To repeal the CFPB rule, the House relied on an obscure law called the Congressional Review Act that gives Congress the authority to eliminate rules recently enacted by executive branch agencies. Unlike most legislation, the law lets Congress repeal rules with a simple majority vote, instead of the 60 votes needed to clear filibusters in the Senate. The Senate has until late September to decide whether to repeal the CFPB rule.

Regardless of what it decides, consumers will still be bound by arbitration agreements in industries outside of financial services. In October, the Supreme Court will hear oral arguments in a case that will determine whether companies can prevent their workers from filing class-action lawsuits.