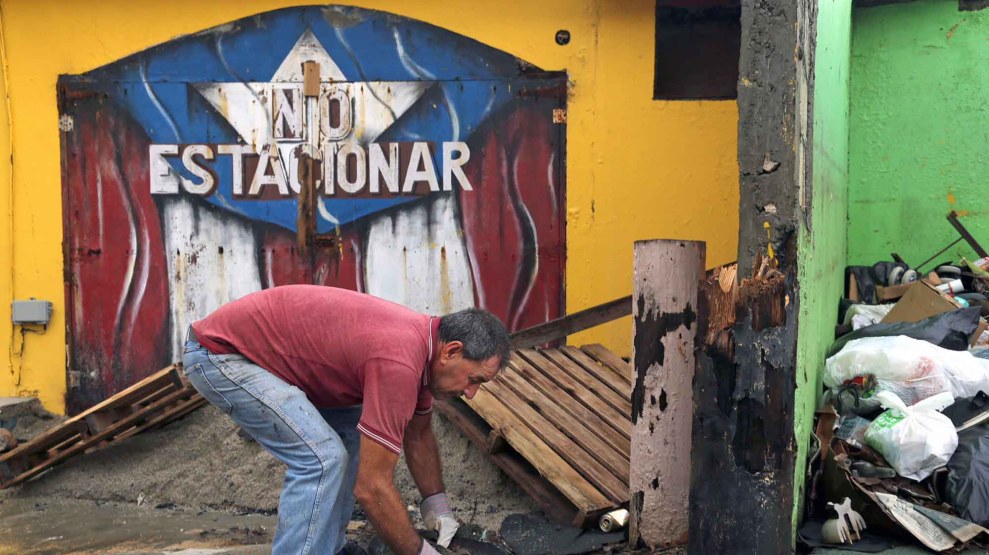 It’s been two-and-a-half days since Hurricane Maria barreled through Puerto Rico, slamming the island of more than 3.5 million people with torrential rains, winds, and flooding the likes of which haven’t been seen in nearly a century. The latest reports indicate that at least six people have been killed in Puerto Rico (and 27 total throughout the Caribbean) as a result of the storm, but that figure is likely to rise as authorities make their way through areas still cut off from communications and rescue operations, according to the Associated Press. As of Friday, much of the island was still without power and working cell phone networks; El Nuevo Dia, one of Puerto Rico’s main news organizations, is reporting that dozens of municipalities are still “incommunicado.” Carlos Mercader, the Washington, D.C.-based representative of Puerto Rico Gov. Ricardo Rosselló, says that there are likely more municipalities still cut off, and that authorities still don’t know the full scope of the damage, noting that even he can’t get in touch with his parents who live in the western part of the island. “That whole west side is totally compromised in terms of communication,” he tells Mother Jones. Meanwhile, Guajataca Dam in the northwestern part of the island suffered a “failure,” according to the National Weather Service, causing the evacuation of at least 10,000 people in the area, Mercader says.

Here we look ahead at what’s next for the island.

What is the latest with the federal response?

President Trump signed a disaster declaration for Puerto Rico on Thursday, paving the way for federal support for things such as grants for temporary housing and home repairs, loans for uninsured property losses, and other federal programs. Making matters more complicated is Puerto Rico’s dire financial situation. Jennifer González-Colón, the island’s non-voting representative to Congress, sent a letter to the president that same day asking that he waive FEMA’s cost-sharing requirements, which typically requires a 25 percent match from local jurisdictions.

The federal government began flying supplies in to Puerto Rico on Thursday morning, including water, helicopters, trucks, and equipment to clear the roads, Mercader says. On Friday morning, after a request from Gov. Rosselló, New York Gov. Andrew Cuomo assembled a relief flight that included large-scale generators, 34,000 bottles of water, 10,000 ready-to-eat meals, along with thousands of cots and blankets, according to CNBC. Rosselló told MSNBC Friday that all supplies were being coordinated through a logistics center and will then be distributed through 12 zones on the island, the New York Times reports.

The US Department of Energy reported as of 4 p.m. ET Friday that all of the island’s major ports were closed and that the US Postal Service had closed all of its facilities.

How long will it take to restore power?

The Department of Energy report noted that nearly all of the 1.57 million power customers on the island were without power, and “all generation assets are believed to be offline.” Local authorities have estimated that it could take four to six months to fully restore power across the island. Mercader says that FEMA, in coordination with local authorities, is working to get electricity and communications back up as quickly as possible, but the process could still take weeks.

“We just spoke to someone on the ground from one of the agencies that has war experience, and he says [it’s like] a war zone, [similar to] when he served in Afghanistan,” Mercader says. “We are saying that the devastation is total. It’s complete devastation.”

New York Power Authority CEO Gil Quiniones also traveled to Puerto Rico with a 10-person team, including drone operators, to help assess the damage to the island’s main electricity provider, the Puerto Rico Electric Power Authority (PREPA), which was already reeling under billions in debt and years of deferred maintenance due to the inability to fund it. PREPA Executive Director Ricardo Ramos said Thursday that the company would not begin normal operations until at least Monday “in an effort to avoid jeopardizing the safety of its employees.”

How will this impact the ongoing fiscal crisis?

Puerto Rico, in the midst of a 10-year economic downturn and dealing with structural colonial economic issues, was already reeling financially. With more than $120 billion in outstanding debt and pension obligations, the island sought to restructure debts under a law signed by President Obama in 2016. The 2016 law allowed the island’s government to seek a form of bankruptcy earlier this year, created a financial review board that would manage the island’s spending and, theoretically, work out debt repayment arrangements with the island’s creditors. So far, as Slate wrote Friday, the board has cut public spending by 30 percent, closed many schools, and lowered the minimum wage for younger workers.

Former Puerto Rico Gov. Luis Fortuño told Politico that any plans made between the governor and the fiscal control board were based on assumptions that were “out the window now,” and that there was “no way” the governor was going to be able to hit the budget set by the board. The board did allow Rosselló to reallocate $1 billion for emergency response efforts, Politico notes, and told the governor that it would “expeditiously approve” additional budget issues that come up as a result of Hurricane Maria.

Members of Congress are already discussing aid packages for Puerto Rico. But there are also fears that hedge funds will use the crisis as a means to further push privatization on the island, and that unless Congress steps up with a package that truly helps, the island’s residents and union workers will lose out.

“Now the island will need massive infusions of captial to rebuild,” David Dayen writes in the American Prospect. “The hedge funds have the wealth to provide it, and have reaped more than enough profit from the picked carcass of Puerto Rico that they can easily afford to give something back … The hard-hearted business decsison to capitalize on suffering isn’t liely to soften now.”