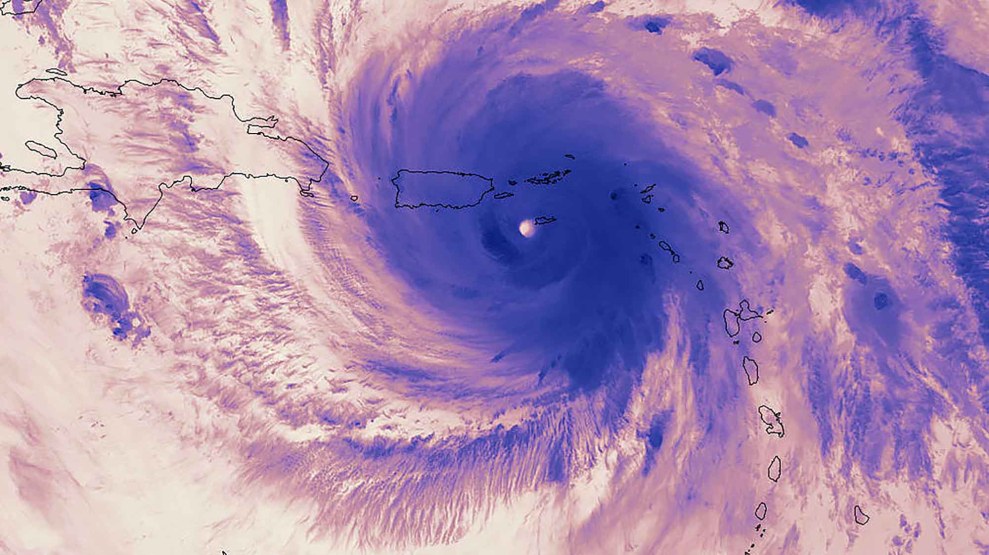 Hurricane Maria ripped through Puerto Rico Wednesday morning, bringing with it devastating winds, flooding, and widespread damage. After dodging Hurricane Irma’s full force two weeks ago, this Category 5 storm hit the American colony and its 3.5 million residents straight on, and slammed most of the island with more than a foot of rain and maximum sustained winds of at least 140 miles per hour, according to the National Hurricane Center. The major local newspaper, El Nuevo Dia, reported Wednesday that winds topped 155 miles per hour in some places.

Puerto Rico Gov. Ricardo Rosello tweeted this morning that he had asked President Donald Trump to declare Puerto Rico a disaster area. Local reports suggest that in at least one small fishing community near San Juan, the island’s capital city, 80 percent of the homes were completely destroyed. During a briefing on Wednesday afternoon, after the eye of the storm moved off the island’s northwest coast, Abner Gómez, the head of the island’s disaster management agency, said that the entire island was without power.

The governor told USA Today on Monday that he expected Maria to “essentially devastate most of the island,” and experts estimate the damage in Puerto Rico and the US Virgin Islands will exceed $30 billion. The storm already has caused at least seven deaths in nearby Dominica and “mind-boggling” damage, according to a message posted to Facebook by Prime Minister Roosevelt Skerrit.

“On the forecast track, it would be the most destructive hurricane in Puerto Rico history,” Eric Blake, a scientist at the National Hurricane Center, tweeted yesterday before the storm made landfall in Puerto Rico.

Roofs are peeling off. You can hear the wind. This is in the metropolitan area of Rio Piedras, San Juan, Puerto Rico. #Maria #HurricaneMaria pic.twitter.com/QNu5fS7DnD

The hurricane hit the island just as it was coping with damage from Hurricane Irma, which did not make a direct hit but passed north of the island September 6. Estimates of damage from that storm are close to $1 billion, according to Bloomberg News. The damage from these two storms is hitting an island already crippled with more than $70 billion in debt and an aging infrastructure that, on its best days, was in very bad shape. Kenneth McClintock, the island’s former Secretary of State, who rode out the storm from a house in the suburbs of San Juan, tells Mother Jones that the ongoing economic crisis has likely worsened Maria’s destruction on the island.

“Probably in the seven days [after Irma], we could have done more if the municipalities had more cash flow, which they did not,” McClintock says, as he was preparing to go outside and survey the damage. “So not all that could have been done in the recovery efforts was done.” The lack of cash prevented the cities and the state government from cleaning other debris out of the way. “The creeks are clogged up by foliage being washed into the creeks, so it may have actually aggravated the flash floods that we’re probably having right now.”

The storm is now projected to skirt the northeastern side of the Dominican Republic before passing to the east of the Turks and Caicos, according to the National Hurricane Center, leaving Puerto Ricans to pick up the pieces. “The information we have received is not encouraging,” Gómez, the head of the island’s disaster management agency, said Wednesday. “It’s a system that has destroyed everything it has had in its path.”