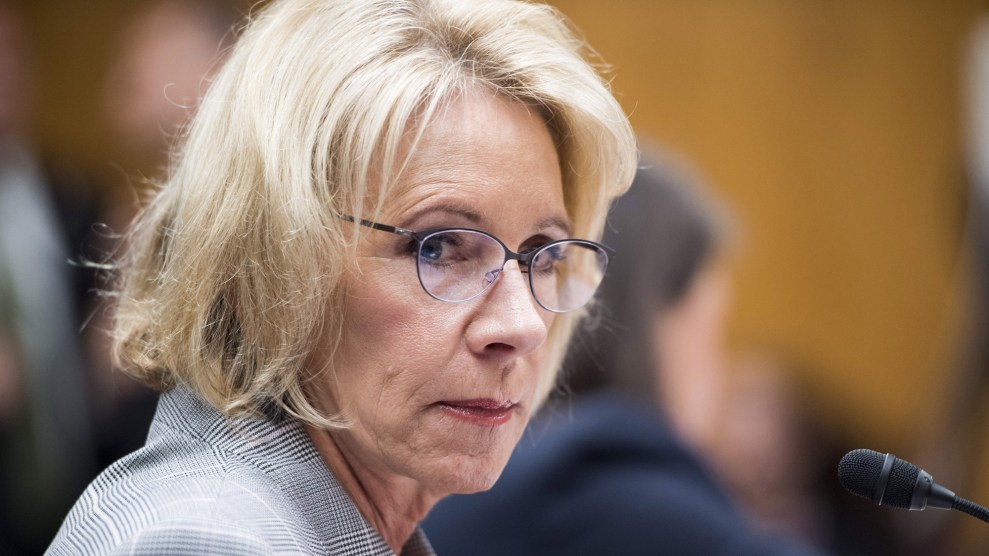 Members of the Family Research Council and Focus on the Family, two conservative Christian groups with a history of support from Education Secretary Betsy DeVos’ family, were among the speakers at Thursday’s Education Department conference on family engagement. Politico first reported that representatives from both organizations were on the event’s agenda.

Family Research Council and Focus on the Family have been heavily criticized for promoting anti-LGBT causes. So their invite to the “Engaging Families and Fathers” event, which aimed to encourage fathers to get involved in the education of their children, raised some eyebrows.

The National Parent Teacher Association withdrew from the conference after learning about the groups’ participation, telling BuzzFeed in a statement that the groups’ views do not align with the PTA’s support of protections for LGBT students.

Tim Goeglein, vice president of external relations at Focus on the Family, and John Mendez, a cultural impact team coordinator at Family Research Council, sat on the “Family Engagement in Faith-Based Organizations”  panel to discuss the role of religious groups in schools.

“One of the things we’ve found at Focus on the Family is that both scripture and science, if I may say, say the same thing: That dads are absolutely central to the success and to the thriving of their sons and daughters,” Goeglin told the audience.

During her contentious January confirmation hearing, DeVos attempted to distance herself from her family’s millions in contributions to Focus on the Family, which supports “conversion therapy,” creationism, and traditional gender roles. DeVos’ father, Edgar Prince, donated millions of dollars toward the founding of the Family Research Council, which has been classified as an anti-LGBT hate group by the Southern Poverty Law Center. As my colleague Kristina Rizga explained in January, DeVos’ family ties to the two groups run deep:

Both the DeVoses and the Princes have been key supporters of Focus on the Family, which was founded by the influential evangelical leader James Dobson. The Dick and Betsy DeVos Family Foundation gave $275,000 to Focus on the Family from 1999 to 2001 but hasn’t donated since; it gave an additional $30,760 to related groups in Michigan from 1999 to 2010. The Prince Foundation donated $5.2 million to Focus on the Family and $275,000 to its Michigan affiliate from 2001 to 2013. (It also gave $6.2 million to the Dobson-founded Family Research Council, a former division of Focus on the Family that became an independent nonprofit in 1992. The FRC has fought against same-sex marriage and anti-bullying programs—and is listed as an “anti-LGBT hate group” by the Southern Poverty Law Center.)

Sen. Maggie Hassan (D-N.H.) pressed DeVos in January about her role between 2001 and 2013 in the Edgar and Elsa Prince Foundation when DeVos was listed as the foundation’s vice president. She denied sitting on the board during those years and chalked her listing as an officer in tax filings to a “clerical error,” insisting she didn’t make decisions for her mother’s foundation. A week earlier, the foundation submitted paperwork to remove DeVos’ name from the organization’s filings. During the same hearing, Sen. Al Franken (D-Minn.) raised questions about her family’s donations to Focus on the Family and asked whether DeVos believed in conversion therapy. DeVos said she did not, adding that “all students, no matter their age, should be able to attend a school and feel safe and be free of discrimination.”

Most recently, DeVos faced scrutiny for not committing to rescinding federal funding from private schools that discriminated against students based on sexual orientation. She reiterated in a recent Senate hearing that the department would not issue decrees and that schools that accept federal funding are required to follow federal law. When the federal law is unsettled, it was up to Congress and the courts to decide whether LGBT students should fall under civil rights protections, DeVos noted. DeVos did not attend Thursday’s event, BuzzFeed reported.