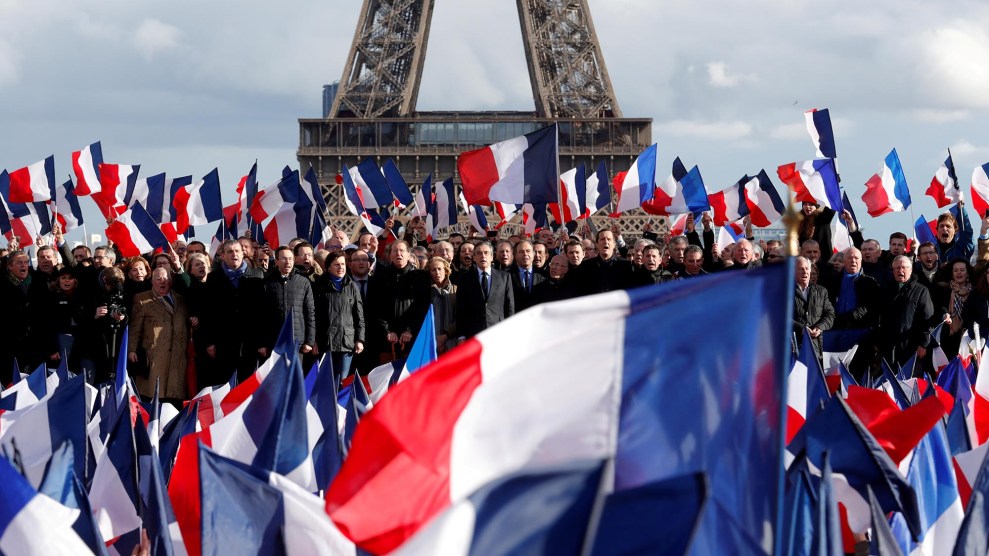 Update 2, April 23, 10:50 p.m. EST: With nearly all the votes counted in the first round of the French presidential elections, it’s clear that centrist candidate Emmanuel Macron and far-right candidate Marine Le Pen are headed for a runoff next month. Macron will be the favorite. As Nate Silver notes, “The…polls show Macron in a dominant position in the runoff. He leads Le Pen by 26 percentage points in polls testing the two-way matchup, according to data compiled by G. Elliott Morris of The Crosstab.”

Update, April 23, 2:15 p.m. EST: Early projections in the first round of French presidential elections on Sunday indicated that Emmanuel Macron, a centrist candidate, and Marine Le Pen, the leader of the country’s far-right movement, are positioned to head into an intensely fought runoff election on May 7—one with big implications for the future of Europe.

French citizens went to the polls Sunday to vote for a new president. The election will have profound reverberations around the world. Will France take a nationalist turn to the right? Will it seek to withdraw from the European Union and restrict immigration? Will a young candidate with a pro-Europe, pro-immigration message convince enough of his voters to actually show up? Will the “French Bernie Sanders” upset the establishment and convince voters that his left-wing populism is the way to go?

Voters could choose between 11 candidates, with four clear front-runners: right-wing nationalist Marine Le Pen, independent centrist Emmanuel Macron, center-right conservative François Fillon, and left-wing populist Jean-Luc Mélenchon. Sunday’s election will narrow the field to the top two vote-getters (unless one candidate earns more than 50 percent of the vote), who will then go head-to-head in a runoff election on May 7.

According to recent polling from the Financial Times, Macron led the pack last week at 24 percent, just 1 point up on Le Pen. But Mélenchon, who had been hovering just above the 10 percent mark for months, saw a late surge in popularity, bringing him into a tie for third place with Fillon at 19 percent. The polling backs up the consensus narrative out of France that Le Pen and Macron will face off in the May 7 election, but Mélenchon’s steep rise over the last month could upset that outcome.

Here are some key points about each of the leading candidates to keep in mind:

Marine Le Pen: The far-right firebrand has been getting a lot of the attention during the race, and polls show she is likely to get through to the second round. The 48-year-old daughter of Jean-Marie Le Pen, the founder of the far-right National Front party, Le Pen is riding a wave of anti-immigration and anti-globalization policy that could make her France’s next president. She’s doing well with the youths of France, who face high unemployment and, according to Marion Maréchal-Le Pen—Le Pen’s niece, who is a member of the French Parliament—resent immigrants because of the sense of losing their own, French, identity.

While polls showing Le Pen doing well in Sunday’s free-for-all election, she consistently lags behind both Macron and Fillon in polls of runoff scenarios. While the National Front has historically been associated with anti-immigration zealotry, Le Pen has recently stirred controversy for aligning herself with an outsider: Russian President Vladimir Putin. Under Le Pen’s leadership, National Front took out a $30 million loan from a Russian bank. Le Pen told reporters that she had to do so because French, American, and English banks won’t lend her money. She says her stance toward Russia is more about reducing American and European Union control over the world and elevating other nations to be more on equal footing with the United States. She’s also taken several pro-Russian positions, including supporting Russia’s annexation of Crimea, pulling France out of NATO and the European Union, and dropping sanctions against Russian interests.

Emmanuel Macron: A former investment banker, Macron, 39, is the country’s former economy minister. Where Le Pen favors a France-first, populist approach, Macron is pro-European Union and pro-NATO and has supported increasing sanctions against Russia if the country does not follow through on plans to address its actions in the Ukraine. The knock on Macron is that he’s too boring, and his platform is trying to be all things to all people, according to Politico, balancing “the big paradox of French political life. Voters want radical change—but they also want candidates to put forward realistic, bordering on safe, platforms.”

Macron is polling nearly 30 points higher than Le Pen in a two-way race. He’s currently about a point up on Le Pen for Sunday’s race, so it’s likely he’ll make it through to the May 7 final election.

Jean-Luc Mélenchon: The “French Bernie Sanders,” as Mélenchon is often called by the US press, is a comparison that isn’t totally accurate, as pointed out by the Intercept. Mélenchon is running from outside the main political parties, whereas Sanders ran for the Democratic Party nomination in 2016. But that hasn’t seemed to hurt Mélenchon’s chances. The 65-year-old supporter of Hugo Chavez and the Castros in Cuba seems to be riding a growing wave of popularity among “disgruntled, blue collar voters” who, despite their troubles with the status quo in France, “do not want to vote for Le Pen,” according to Foreign Policy.

If he were to edge ahead of Macron, French voters would likely be left to choose between a far-right and a far-left candidate, a prospect that the Wall Street Journal called “a nightmare scenario for investors.” The theory underpinning the investor-worry is that both candidates in that scenario would advocate policies that would scare investors from servicing France’s debt, lower the value of its currency, and stunt economic growth. According to the Financial Times polling data, Mélenchon is polling 18 points ahead of Le Pen if the two were to compete in May.

Still, there are many in France who agree with his message—similar to Sanders’ during the 2016 US presidential election—that wealth in France is concentrated in too few hands at the top of the food chain. Mélenchon has proposed a 32-hour work week, cutting the retirement age from 62 to 60, and a 100 billion euro ($107 billion) stimulus plan. But he also proposes pulling France from NATO, a move that would remove one of the alliance’s strongest members. Mélenchon isn’t as anti-European Union as Le Pen, but he says he wants to reform the European Central Bank to respond more to political interests than economic interests.

François Fillon: As a former prime minister, the conservative 63-year-old was an early favorite to win the race. But his support plummeted after it came to light that he’d gotten his wife and two of his adult children more than $1 million in parliamentary payments for jobs they didn’t really do. Fillon insists he did nothing wrong, but some have called on him to bow out of the race. The New York Times reported in early March that “hundreds of Mr. Fillon’s former backers have distanced themselves from him,” and recent polling has put him at either third or fourth place behind Le Pen, Macron, and, at times, Mélenchon.

As far as policy positions, Fillon has strong support from Catholics and other social conservatives for opposing same-sex marriage. He’s proposed increasing the retirement age, slashing public benefits, getting rid of the 35-hour work week, and cutting 600,000 public-sector jobs. He has also said he’s ready to battle the country’s strong unions. He’s pro-European Union but has advocated better relations with Russia in order to defeat ISIS.