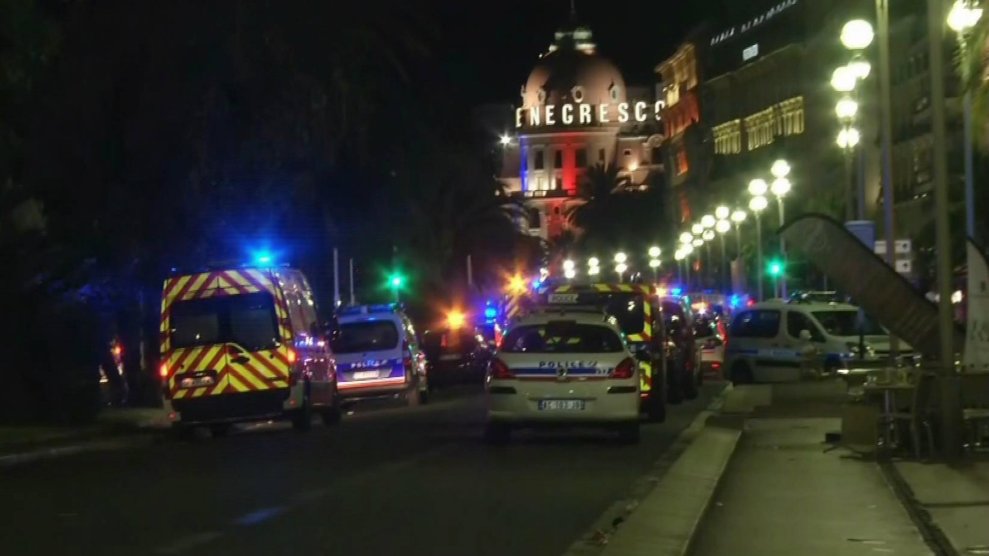 In this video screen shot, ambulances and police cars arrive after a truck drove on to the sidewalk and plowed through a crowd of revelers who’d gathered to watch fireworks in the French resort city of Nice.BFMTV via AP

Update, July 14, 7:34 p.m. ET: Christian Estrosi, president of the Nice region, said the truck was loaded with arms and grenades. “This is the worst tragedy in the history of Nice as there are regrettably already more than 70 victims,” Estrosi tweeted.

ISIS has not officially claimed responsibility for the attack, but some of the group’s supporters celebrated the carnage on Twitter.

US presidential candidate Donald Trump tweeted that he’s postponing a scheduled news conference to announce his vice presidential running mate in light of the attacks.

During tonight’s Bastille Day celebration and fireworks display in Nice, France, a truck plowed into the crowd, and some witnesses say shots were fired during the chaos.

Nice’s prosecutor’s office reports that 60 people are feared dead in the attack, and some news reports estimate as many as 100 people are injured.

France’s interior ministry confirmed that the truck’s driver is dead.

The New York Times reports that France has been on alert for terrorist activity for months. In November, 130 people died in Paris during a devastating attack that the Islamic State eventually claimed responsibility for.

A spokesman for the interior ministry said it was too early to tell if tonight’s attack was a terrorist attack. French President Francois Hollande has activated the government crisis center.

President Barack Obama has been apprised of the attack and is being updated, the White House said.

This breaking-news story is being updated as we learn more details.