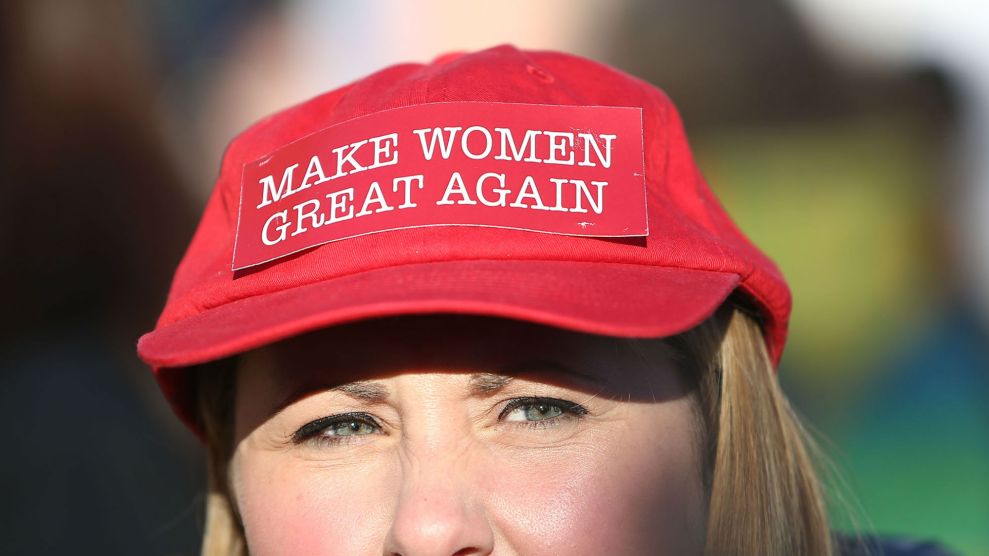 When a video of Donald Trump boasting about grabbing women “by the pussy” leaked a month before the 2016 presidential election and his party seemed on the cusp of rejecting him, onlookers wondered whether his apparent admission of sexual assault might have finally crossed a line with voters. But conservatives who were reassured by his promises to roll back reproductive rights turned a blind eye to the sexual-assault claims.

With those concerns about his electability far behind him, as president Trump has made good on his assurances. He may have discussed child care and other so-called family-friendly policies, but in the first 100 days of the Trump administration, the country has seen an unprecedented rollback of many hard-won reproductive rights. Trump has pushed to defund Planned Parenthood, appointed a Supreme Court justice who he promised would vote to overturn Roe v. Wade, and cut off US aide for family-planning services globally. States have also ridden the Trump wave: 1,053 measures—both restrictive and proactive—have been introduced in state legislatures in 2017 alone.

Women have not been passive in the face of these setbacks. They came out in droves to protest Trump’s inauguration during the Women’s March the day after his inauguration. Eleven-thousand women have told Emily’s List, an organization that gets pro-choice women elected to office, that they want to run for something next year, compared with 900 last year. And women already in positions of power have taken Trump to task on his Cabinet nominees, his travel ban, and his environmental policies.

But if his first 100 days as president are any indication, the three-plus years ahead will be grueling for women in the United States and abroad. Here’s what’s happened so far.

In the weeks following Trump’s January 2017 inauguration, his daughter Ivanka took the unexpected step of reaching out to Planned Parenthood President Cecile Richards to request a meeting. On the campaign trail, her father had promised to “defund” the women’s health care provider by prohibiting low-income patients from using their Medicaid coverage for care at Planned Parenthood clinics because the group also performs abortions.

Richards sought to explain to Ivanka Trump that Medicaid reimbursements to Planned Parenthood don’t fund abortions, but instead go to other forms of reproductive health care—cancer screenings, pap smears, contraception, and more—because of the Hyde Amendment, which has prohibited the use of federal funds for almost all abortions for more than 40 years.

But in the months following the meeting, the Trump administration and the GOP-controlled Congress launched an offensive against Planned Parenthood. Bills proposing to prohibit the use of Medicaid by patients at Planned Parenthood were introduced in both the House and the Senate and are still awaiting a vote. A week after Trump’s inauguration, audio was leaked of a closed-door meeting where Republicans voiced concerns about the political repercussions of defunding a women’s health organization that’s popular even among Trump voters. A month later, Trump tried to cut an informal deal with Planned Parenthood: keep your funding, maybe even increase it, if you stop providing abortions. The women’s health organization rejected the idea. Soon after, the Trump administration’s Obamacare repeal bill was introduced, including a provision to defund Planned Parenthood. That bill failed, but the revised version of the repeal bill, introduced by Republicans this week, contains the same provision and is still awaiting a vote.

Another administration effort to kneecap Planned Parenthood’s funding, however, was more successful. A bill allowing states to withhold Title X family-planning funds from health care providers that offer abortion, like Planned Parenthood, passed both chambers of Congress in February and March. Title X grants help fund nonabortion services such as contraception for low-income women, and more than one-third of the 4 million patients who use Title X each year receive care at Planned Parenthood.

Vice President Mike Pence was essential to that bill’s passage. After two GOP senators voted against the bill, Republicans were forced to whisk in the vice president to cast a tie-breaking Senate vote to advance the legislation. In April, Trump signed the bill into law in a private ceremony, an uncharacteristically publicity-shy moment for a president who has seemed to relish in the public spectacle of his other signings.

It was hailed as a massive win for reproductive rights advocates, but Trump’s victory and Republican-dominated statehouses reinvigorated both abortion opponents and abortion rights advocates who collectively have proposed 1,053 state-level provisions regarding women’s reproductive health in 2017. Thus far, 18 abortion restrictions have been enacted at the state level, according to the Guttmacher Institute, a reproductive rights think tank. Twenty-two states have potential legislation on deck to ban abortion in most cases outright—four of these are bans known as “trigger laws,” meaning they would automatically become state law should Roe v. Wade be overturned in the Supreme Court. And despite the Supreme Court ruling just last year, 30 states have introduced TRAP legislation in the hopes that a new justice would tip the scales should another challenge to the constitutionality of those laws arise.

Also trending in anti-abortion state legislatures this year are fetal burial laws, which require tissue extracted from the uterus after an abortion to be buried rather than disposed of as medical waste, creating additional costs and burdens for providers; religious liberty protections for crisis pregnancy centers—in Oklahoma; counseling that relies on anti-scientific information to persuade women that medication abortion can be reversed—in Indiana; personhood bills that endow a fetus or an embryo as a person with full rights under the Constitution—in Iowa and North Carolina; and waiting periods between the initial medical evaluation and the actual abortion procedure—in Colorado. Ohio and Kentucky passed laws banning abortions after 20 weeks, and Pennsylvania and Montana are considering similar bills, as are others.

Years before running for president, Trump said that, despite his personal dislike of abortion, he was “pro-choice in every respect” and that abortion “is a personal decision that should be left to women and their doctors.” But in recent years, the reality TV star turned politician has said he no longer supports abortion access. During his presidential campaign, Trump’s stance remained anti-abortion with the then-candidate saying that the overturning of Roe v. Wade, the 1973 Supreme Court decision that women had a constitutional right to an abortion under the 14th Amendment, “will happen, automatically,” should he be elected and have the chance to appoint justices to the nation’s highest court. In the months after his election, anti-abortion advocates have argued that he will make good on that promise.

But overturning Roe will be a complicated task and is likely one of the hardest goals for Trump to actually achieve. The Supreme Court recently affirmed women’s constitutional right to abortion without undue burden in its Whole Women’s Health v. Hellerstedt decision last June, and it will likely take years before another challenge makes its way to the Supreme Court. For the court to decide to completely overturn Roe, it would need to reject more than four decades of settled precedent.

Still, there are ways that Trump can begin laying the groundwork for overturning the landmark ruling. He has consistently promised to place “pro-life justices on the US Supreme Court,” and while some anti-abortion advocates argued that his pool of potential picks weren’t sufficiently conservative, there is still plenty for them to like about Trump’s first Supreme Court appointment, Neil Gorsuch. Since being appointed to the circuit court by George W. Bush in 2006, Gorsuch has taken conservative stances on reproductive issues—recently he wrote the dissenting opinion in a ruling that blocked Utah from defunding Planned Parenthood.

During his time on the appellate court, Gorsuch ruled in favor of Hobby Lobby’s effort to fight against the Obamacare rule requiring companies to include contraception coverage in their health insurance plans. While Gorsuch is likely to be a strong voice in favor of pro-life advocates, as a successor to Antonin Scalia, he will not drastically shift the balance of the court. But if Anthony Kennedy, a frequent swing vote, or a more liberal justice like Ruth Bader Ginsburg vacates their seat in the next few years, Trump would have an opportunity to move the Supreme Court in a decidedly anti-Roe direction.

States also play a large role in determining what will happen. While the Supreme Court’s newest member adjusts to being on the bench, conservative-led legislatures have remained undaunted in their efforts to get another abortion rights case before the courts. Abortion restrictions, particularly the emergence of bans before fetal viability, have become some of the biggest sources of a potential court challenge. As Elizabeth Nash, senior state issues manager at the Guttmacher Institute, said in a recent interview with Mother Jones, some states “are thinking about being the state that overturns Roe v. Wade, and the way to do that is to adopt something like a 6-week abortion ban or a 20-week abortion ban and then send that up through the courts.”