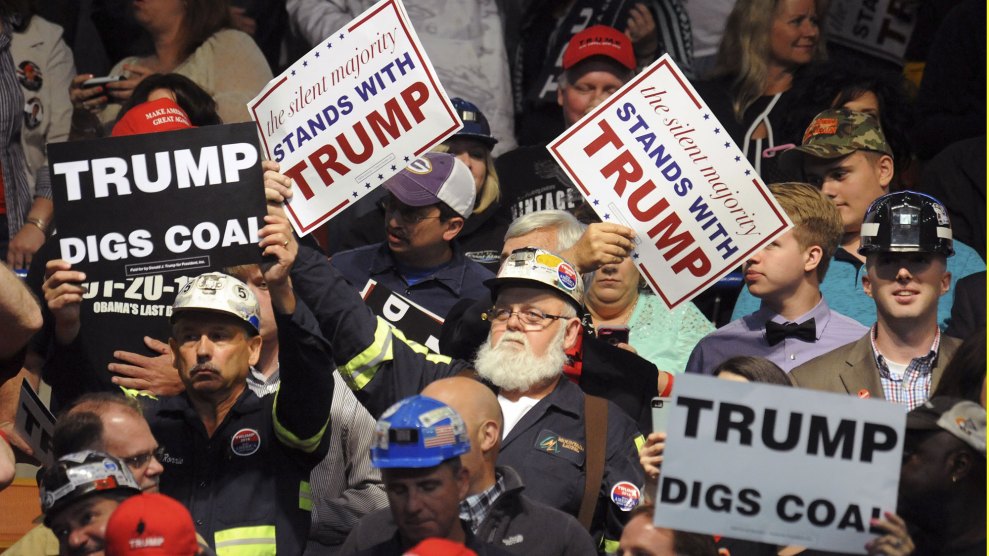 President Donald Trump released his budget blueprint on Thursday morning and his administration is already playing defense. In an interview on MSNBC’s Morning Joe, Office of Management and Budget chief Mick Mulvaney argued that the steep cuts (in some cases down to zero) to some government programs were necessary to ease the burden on the working man.

This argument suggests an unfamiliarity with both coal miners and the budget itself—as things currently stand, a coal miner making $51,000 a year (roughly the median US household income) pays about 60 cents in taxes to the Corporation for Public Broadcasting. Mulvaney’s misdirection gives away the game. Trump campaigned as a champion of rural America and small and midsize Rust Belt cities, but—much like his proposed Obamacare repeal—his budget brings the hammer down on the very people who put him in office.

The steepest cuts in Trump’s budget target the Environmental Protection Agency (30 percent) and the Department of Agriculture (29 percent). But other agencies facing double-digit cuts include the departments of health and human services (23 percent), education (14 percent), and the interior (13 percent). The consequences of such cuts would be sweeping and leave their mark on cities and suburbs, red states and blue states. But here’s a look at what they mean for the regions that handed Trump his victory.

The Upper Midwest: Trump broke the Democratic “blue wall” by racking up huge wins along the Great Lakes in places like Erie, Pennsylvania, and Macomb County, north of Detroit. His budget axes the $300 million in annual funding for the Great Lakes Restoration Initiative, an EPA program that aims to boost economic development and improve public health, with 3,455 projects across eight states. The Great Lakes initiative exists to combat the ill-effects of the region’s industrial legacy. Among its chief responsibilities: stopping algae blooms that left 400,000 Ohioans without drinking water at one point in 2014. Michigan Republican Rep. Fred Upton already called an earlier version of the proposed cuts “alarming.”

The Upper Midwest is also known to get cold in the winter. The Low Income Home Energy Assistance Program helps 5.7 million Americans heat their homes, and those people are disproportionately located in the frigid Midwest. (Michigan, for example, receives more funding than California, which has a far greater population.) The energy assistance saves families money they often need for other things—41 percent of the recipients in 2014 lived with someone with a disability, and 19 percent had children.

Rural America: Terry Gross will be fine—the cuts to the Corporation for Public Broadcasting that Mulvaney alluded to will mostly affect small public radio stations in rural America that get by on subsidies rather than tote bags. Mulvaney’s hypothetical coal miner most likely lives in Wyoming, Trump’s best state, where public radio will face a $320,000 budget hole if Trump gets his way, and Wyoming public television would need $700,000 to fill a 30 percent budget gap. Those are the lucky ones: In 2014, the CPB noted that 26 rural stations—many on Native American reservations—relied on federal funding for at least half their revenue. In addition to providing news and cultural programming, these stations function as emergency broadcasting platforms in the event of a disaster.

Also on the chopping block: the $498 million Water and Wastewater loan and grant program, which funds clean-water projects in communities with fewer than 10,000 people; according to the budget blueprint, these communities can be served by “private-sector financing” instead.

West Virginia: Trump’s budget would eliminate the Chemical Safety Board, the federal agency that investigated the 2014 chemical spill outside Charleston that left 300,000 people without drinking water for five days. The board has its hands full in West Virginia, and if it disappears its work will simply go undone—the state’s own chemical safety board is virtually nonexistent.

Also gone would be the Appalachian Regional Commission, a state-federal partnership that pays for economic development programs in Trump-leaning swaths of West Virginia, Pennsylvania, Ohio, and 10 other states. The proposed elimination of the $715 million Community Services Block Grant program would hit poor states such as West Virginia especially hard—the money it provides often ends up in exactly the kind of economically depressed communities Trump claims to champion.

In the southern West Virginia coal haven of Mingo County, the block grant program supports the Coalfields Community Action Partnership, which helps locals buy new clothing after a fire, and covers the cost of (nonpainkiller) prescription medications. The CSBG-funded Council of the Southern Mountains in nearby McDowell County operates a day care program and a credit union, which helps low-income residents save up for Christmas presents.