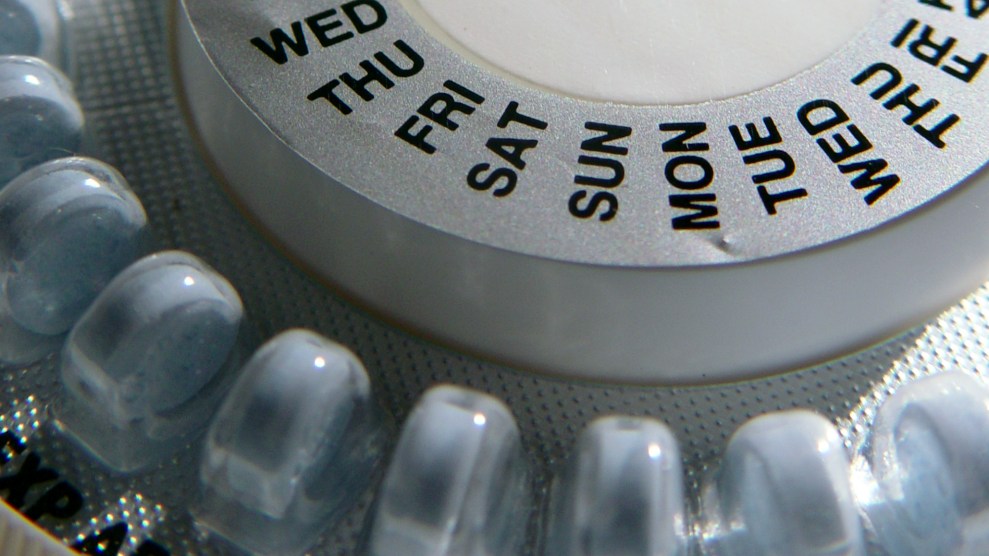 When Carina Guzman arrived in Troutdale, Oregon, almost nine years ago as an undocumented teenager from Colombia, she wasn’t prepared to navigate the vast range of services available in the state. She knew that she wanted contraception, but her inexperience with Oregon’s health care system and inability to obtain insurance due to her citizenship status left Guzman confused about her available options. “When it came to choosing to access reproductive health care services, I was pretty much on my own,” she says.

Guzman eventually found out that she could purchase birth control, but without any insurance, a 12-month supply would set her back hundreds of dollars. A friend told her she could go to Planned Parenthood and—thanks to Oregon’s involvement in the federal Title X family-planning program—get a year’s worth of birth control free of charge.

Now in her early 20s, Guzman’s circumstances have changed considerably. A few years ago she was able to secure documentation of her immigration status, she found a job after graduating from high school, and she now has health insurance through her employer. She points to Planned Parenthood and the contraceptive security it provided as one of the reasons for her success. Without the organization, she says, it “would have been five years of me not accessing anything.”

But in the near future, with a wave of anti-abortion legislation emerging from conservative statehouses across the country, the fate of the Affordable Care Act in question, and Planned Parenthood’s federal funding in jeopardy, women in many states may soon not have Guzman’s options.

As Congress and several GOP-controlled states ramp up efforts to curb access to abortion and roll back reproductive health care, Oregon may be moving in the opposite direction. Last week, a coalition of activists and community advocates announced the launch of a new promotional campaign in support of the Reproductive Health Equity Act of 2017, a bill that would make the state the first in the nation to establish reproductive health equity by protecting no-cost birth control and extending full coverage of reproductive health services to immigrant women, transgender and gender-nonconforming people, and the uninsured. The legislation is the brainchild of the Pro-Choice Coalition of Oregon, a collective of local reproductive rights advocates, community organizations, and racial and gender justice groups. The measure was filed by two Democrats, state Sen. Laurie Monnes Anderson and state Rep. Jeff Barker, ahead of the upcoming legislative session and will be officially introduced in the beginning of February when the Oregon Legislature reconvenes.

Oregon is one of 28 states that currently mandate contraceptive coverage, meaning that coverage would still exist even if the Affordable Care Act were repealed. But some older insurance plans “grandfathered” in when the state first set up its health care exchange do not cover the full cost of contraception, forcing some women in the state to share the cost.

The Oregonian notes that the bill would “require health insurers to cover other reproductive health services, including well-woman care, prenatal care, breastfeeding support and testing for sexually transmitted infections,” in addition to providing for post-partum care and covering screenings for cervical cancer, breast cancer, and gestational diabetes. The legislation would also add abortion to the list of reproductive health services that commercial insurance plans on the state’s Affordable Care Act Exchange must cover with no additional cost—a change that would set Oregon apart from the 25 states that restrict plans on state exchanges from covering abortion. It does offer religious employers an exemption, allowing them to opt-out of providing insurance plans covering contraception and abortion.

Groups that face significant barriers to accessing affordable health care and are often prevented from accessing insurance that covers their needs, such as immigrant women and transgender and gender-nonconforming communities, also stand to gain if the legislation is passed. While Oregon has moved to eliminate barriers facing undocumented immigrants, some 48,000 women of reproductive age in Oregon are unable to access insurance because of their citizenship status, and insurance coverage often relies on one’s gender-marker, limiting the ability of transgender men to access reproductive care. Advocates note that the bill contains provisions that will aid both groups, adding that the measure would be one of the first in the country to bar discrimination in reproductive health care coverage.

“The Reproductive Health Equity Act…would ensure that all Oregonians, regardless of income, citizenship status, gender identity, or the type of insurance that they have, have the freedom to decide if and when they have children.”

“The Reproductive Health Equity Act is legislation that would ensure that all Oregonians, regardless of income, citizenship status, gender identity, or the type of insurance that they have, have the freedom to decide if and when they have children,” says Laurel Swerdlow, the advocacy director of Planned Parenthood Advocates of Oregon, one of the groups on the Pro-Choice Coalition’s steering committee.

The Oregon Legislature has a democratic majority, possibly curbing strong conservative opposition to the measure. But previous efforts to pass proactive reproductive health care legislation in Oregon have run into difficulty. In 2015, the Comprehensive Women’s Health Bill, a measure that would have required insurance companies to cover a range of reproductive health services at a low cost, was proposed. The bill had a strong start in the Legislature but was killed by Democrats out of fear that a provision covering abortions would be too controversial.

This time, advocates hope that the Reproductive Health Equity Act won’t suffer the same fate—despite the bill containing a similar provision covering abortions—arguing that the national climate around reproductive rights, when coupled with the legislation’s nondiscrimination protections, make a compelling case. “Oregonians and their legislators now understand in personal terms and in public health benefits that the full spectrum of reproductive health services needs to not only be safe and legal, but affordable and accessible,” Planned Parenthood Advocates of Oregon Executive Director Mary Nolan said in a statement.

The Oregon measure was being worked on well before the election, but supporters of the legislation say Donald Trump’s surprising victory has added new urgency to the need for the laws. Monnes Anderson says fears of an Affordable Care Act repeal are a motivating factor, telling the Oregonian, “We want to get ahead of what may happen at the federal level.”

Recent actions on Capitol Hill support their concerns. During a vote earlier this month, Senate Republicans rejected an Affordable Care Act amendment that requires insurance companies to cover the full cost of contraceptives, a move that could leave millions of women without no-cost birth control if Republicans succeed in dismantling the ACA.

Proactive reproductive health legislation may become more common in liberal states eager to mitigate the effects of an ACA repeal. The New York state assembly recently passed two measures, the Reproductive Health Act and the Comprehensive Contraception Coverage Act, that would protect abortion and contraceptive access if the ACA is dismantled. On Saturday, New York Gov. Andrew Cuomo announced that health insurers in the state would be required to cover most forms of contraception and medically necessary abortions at no cost. A Democratic legislator in Illinois is considering introducing a bill that would expand abortion coverage for women on Medicaid and some forms of state insurance. In Virginia, Democrats have introduced several bills to counteract attacks on reproductive health; one of them—the Birth Control Access Act—would allow women to obtain an entire year of birth control at one time.

Oregon has had a long history of supporting reproductive rights with policy initiatives. In 1969, the state became one of the first to legalize abortion, and it does not have any laws restricting the procedure. Last year, Oregon became the first state to enact a law allowing women to get a birth control prescription without needing to visit a doctor. That law and the Affordable Care Act’s birth control mandate have helped expand contraceptive use in the state, contributing to a 15 percent drop in abortions between 2011 and 2014. Last week, the Guttmacher Institute released a survey that found the national abortion rate has hit the lowest point since the the Supreme Court’s ruling in Roe v. Wade, noting that increased contraceptive use has likely played a large role in the decline.

Advocates hope the insurance mandates will protect that progress, but they also argue that the state should go further when it comes to supporting the reproductive health of underserved communities, adding that during the Trump administration, the Reproductive Health Equity Act is a practical necessity and an important statement. “Oregon has often been at the forefront on health care policy, but there have also been individuals left behind,” says Amy Casso, the gender justice program director of Oregon’s Western States Center. “We are working to ensure that no one has to be denied necessary lifesaving care.”