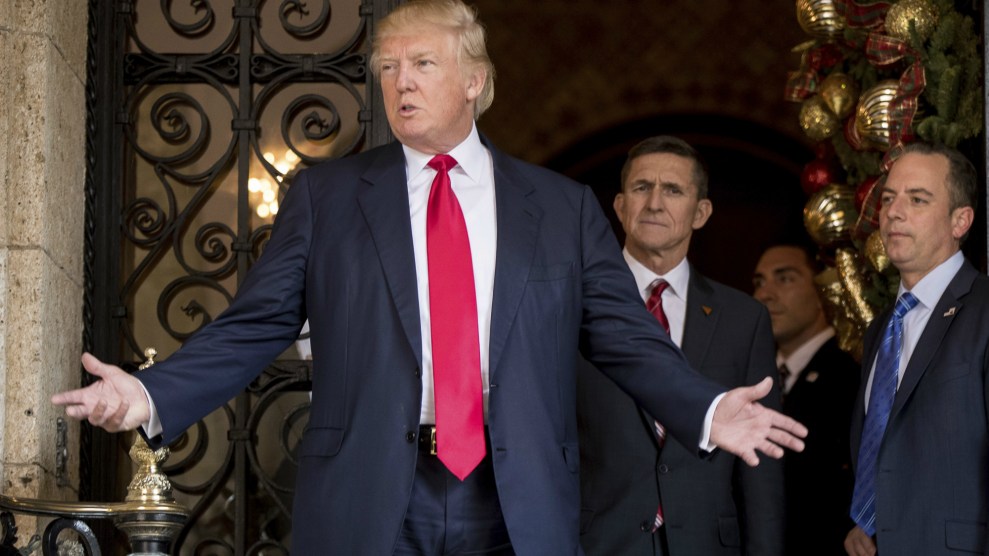 Donald Trump’s biggest creditor, Deutsche Bank, is seeking to restructure some of the president-elect’s debt, Bloomberg reports. Trump’s companies owe the German lender at least $364 million, more than half of his total $713 million debt load, and his loans with the bank—a potential source of leverage over the incoming commander-in-chief—pose a significant conflict of interest.

According to Bloomberg, Deutsche Bank is seeking to limit the conflict by removing Trump’s personal guarantee from the loans, meaning that the president-elect would not be personally on the hook if the loans go bad. Trump has also personally guaranteed loans to his second-biggest lender, Ladder Capital Finance, to which he owes $282 million.

Bloomberg cited unnamed sources who indicated that the bank was the party seeking the changes and that delicate restructuring talks are underway. Trump’s personal guarantees have helped him secure low interest rates, and if the guarantees are removed, the bank could compensate by raising the interest on Trump’s loans or asking for other assets to serve as collateral.

Mother Jones reviewed all of Trump’s publicly listed debts earlier this month and found that Trump has four loans with Deutsche Bank: two mortgages on his Miami Doral golf course, a loan on his Chicago tower, and a $170 million loan tied to his brand-new Washington, DC, hotel. All four loans were made through Deutsche Bank’s private bank, a division that caters to high-net-worth individuals and has the flexibility to make loans that the commercial lending side of the firm might balk at.

Since his election, Trump has repeatedly faced questions about the unprecedented conflicts of interest posed by his business empire. So far, the president-elect has done little to allay concerns about his business interests. Trump canceled a scheduled press conference earlier this month at which he said he would discuss how he would separate himself from his business, but he also indicated that his solution did not involve divesting himself from his assets. Instead, he suggested he would step back from daily operations. That would do little to insulate himself from conflicts, and it would do nothing to solve the ethical issues created by his loan guarantees, which make him personally responsible if the bank ever deems the terms of the loans to have been broken. Even if he does divorce himself from his business, he can’t separate himself from the guarantees that put his own money on the line—or from the leverage his lenders have over him.

Trump’s relationship with Deutsche Bank when he enters the White House is particularly fraught because the German firm is currently in the midst of a regulatory tussle with the Justice Department. In 2015, the bank paid American and European regulators $2.5 billion in a settlement for its role in helping to rig the interest rate market. Now the bank is negotiating with the Justice Department on an even bigger potential settlement—as much as $14 billion—for its role in the creation and sale of bad mortgage products in the run-up to the 2008 financial crisis.

Separately, Reuters recently reported that Ladder Capital may be exploring putting itself up for sale, opening the possibility that Trump’s second-largest lender could wind up in the hands of interests that aren’t necessarily aligned with America’s.

The potential conflicts of interest over the Deutsche Bank loans are separate from concerns that ethics experts have expressed about a possible violation of the Constitution’s emoluments clause, which prohibits government officials from receiving beneficial treatment from foreign governments. Those concerns stem from a $920 million loan from the state-owned Bank of China and a coalition of lenders (that also includes Deutsche Bank) to a real estate partnership that Trump is part of.