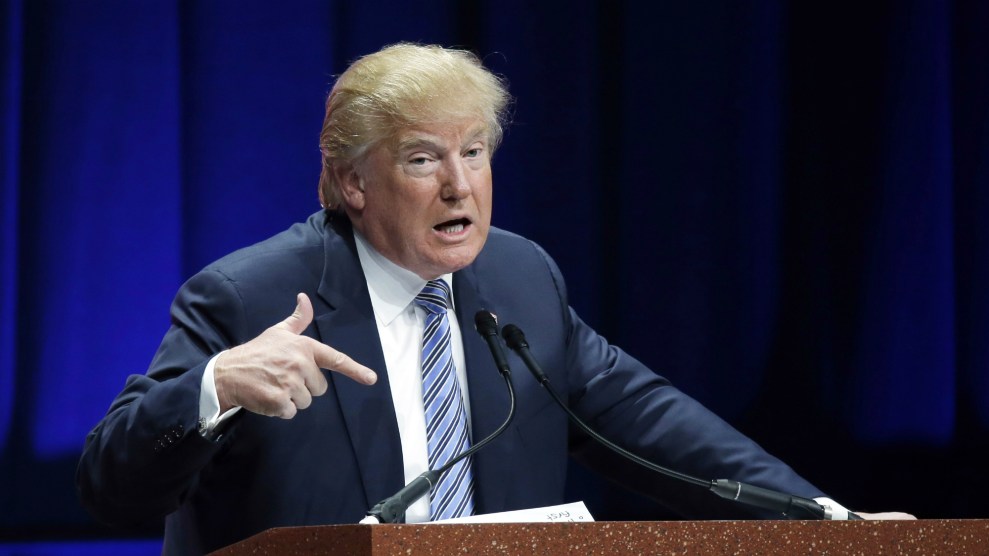 Five top Senate Democrats say they will introduce legislation when Congress returns for its new session in January that would force Donald Trump to sell off at least some of his assets and solve his complicated conflict-of-interest problems. Trump owns hundreds of businesses and has a broad range of financial interests, from traditional investments such as stocks and bonds to large real estate holdings to licensing deals in the United States and abroad. Trump also has significant debts, totaling at least $713 million. But even as pressure has mounted on the president-elect to deal with the minefield of conflicts created by his holdings, Trump has indicated he will not divest himself of his interests. Instead, in a series of tweets, Trump has indicated he plans to simply stop actively managing his businesses. That’s not enough, say the group of Senate Democrats.

Conflict-of-interest rules currently apply to all top federal officials—except the president and vice president. The carve-out was enshrined during the George H.W. Bush administration, at least in part because the president and vice president can’t recuse themselves from their duties if they run into the same strict conflict-of-interest rules governing other federal employees. Since then, presidents and vice presidents have voluntarily taken steps to avoid even the appearance of conflicts, often by placing their assets in blind trusts. For example, in preparation for his 2008 campaign, Barack Obama put almost his entire personal stock portfolio in Treasury notes and the remainder into widely held mutual funds. Obama also declined to refinance his home mortgage, even though far lower rates are now available, so as not to create even the appearance of a conflict of interest.

Even Trump has expressed surprise at the lack of conflict-of-interest rules covering the commander in chief. “I’d assumed that you’d have to set up some type of trust or whatever,” he said in a recent interview with the New York Times, “and you don’t.”

Sponsored by Sens. Elizabeth Warren (D-Mass.) Ben Cardin (D-Md.), Jeff Merkley (D-Ore.), Dick Durbin (D-Ill.) and Chris Coons (D-Del.), the proposed legislation would change that, though it would stop short of requiring Trump and future presidents to divest themselves entirely. Instead, the legislation would require that all assets that pose a conflict be sold off and the proceeds be placed in a blind trust. The sale of assets and management of the proceeds would be handled by an independent trustee.

The proposal also would define a presidential violation of the conflict-of-interest law as a “high crime or misdemeanor”—an impeachable offense. Democrats backing the legislation may face an uphill battle because few Republicans have expressed an interest in joining the fight.

The announcement of the legislation seems to come, at least in part, from frustration by Democrats that Trump and many Republicans seem to be brushing off concerns about his unprecedented conflicts. Before the election, when it seemed likely that Hillary Clinton would win, Rep. Jason Chaffetz (R-Utah), who chairs the House Oversight and Government Reform Committee, vowed to dig into the personal business dealings of the new president. But he has so far been silent in response to Democratic requests for an investigation into Trump’s conflicts. On Wednesday, Trump was slated to hold a press conference to explain his plan for stepping back from his business interests, but he abruptly canceled this session and said he would elaborate on his plans sometime in January.

“Just this week, the President-elect canceled a scheduled announcement about severing his business ties, taking time instead to meet with Kanye West,” Durbin said in a statement released with the announcement of the legislation. “The American people deserve to know that their President is putting the United States’ interests before his own, his family’s, or that of any foreign government.”