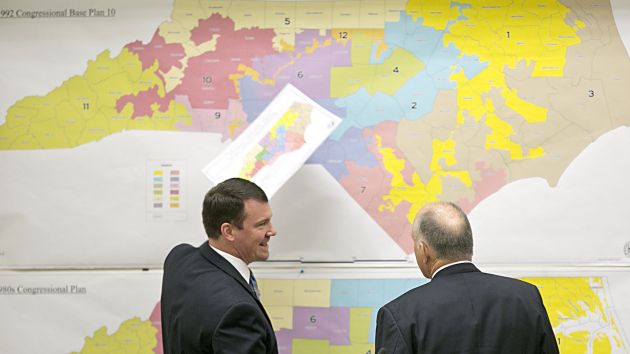 The 2016 election cycle might be over, but that doesn’t mean voting rights issues are resolved. The first general election since the Supreme Court gutted the 1965 Voting Rights Act was replete with voter access issues, voter registration problems, and Election Day technical problems, but issues around partisan redistricting and racial gerrymandering largely flew under the radar. Not anymore.

Two gerrymandering cases were argued before the US Supreme Court on Monday. Each of them will try to sort out how much state redistricting bodies can and should take race into account while drawing new legislative districts. Determining voting districts to preserve partisan control is not illegal, but depriving a racial group of its broader electoral voice as the motivating factor for redistricting is.

“If it’s politics, it’s fine,” Justice Elena Kagan said, according to the New York Times. “If it’s race, it’s not.”

On Monday, the court heard arguments in Bethune-Hill v. Virginia State Board of Elections and McCrory v. Harris. The first case stems from the redistricting of state legislative districts in Virginia after the 2010 census. The Republican dominated state Legislature redrew the districts so the state’s 12 majority-minority districts that were already 55 percent African American included some African Americans from other districts. The dozen parties in the case each live in the 12 majority-minority districts. They argued that the Legislature’s redrawn districts effectively diluted African American voting power in the surrounding districts, thereby ensuring Republican control. Republicans in the state explained they were merely trying to maintain African American voting power, and that by doing away with the 55 percent majority distribution they risked running afoul of the Voting Rights Act by creating districts in which minority voters were no longer the majority.

By setting a floor of 55 percent of the African American voting-age population, the plaintiffs argued, the Legislature was explicitly creating districts based on race. In October 2015, the case went before a three-judge district court panel and they ruled race was only the predominant motivating factor in one of the districts, but not the others. The plaintiffs are now asking the Supreme Court to overturn the lower court’s ruling and find that the 55 percent floor violated the 14th Amendment’s equal protection mandate by placing voters in districts purely on the basis of the color of their skin. Justice Samuel Alito said requirements under the law are “very, very complicated” and a ruling in favor of the plaintiffs could spark litigation every time a state redraws legislative district boundaries.

Kagan said it seemed that a standard floor for all districts didn’t make much sense. “It sort of defies belief you could pick a number and say that applies with respect to every majority-minority district,” she said, according to the Washington Post.

It’s worth noting that at the time the districts were drawn, Virginia still was covered by Section 5 of the Voting Rights Act, which forced states with a history of racial discrimination to clear changes to voting laws or procedures with a federal judge or the US Department of Justice. In this case, the Department of Justice under Eric Holder approved Virginia’s changes. Section 5 was gutted in the 2013 Shelby County v. Holder decision, which found that the mechanism for determining which jurisdictions needed to get approval was unconstitutional because the formula used to determine the requirements was out of date.

McCrory v. Harris is also about racial gerrymandering, but this case concerns two of the state’s 13 congressional districts that North Carolina argues are not packed with African Americans as part of a racial quota in order preserve a 10-3 Republican advantage in the state’s congressional delegation. David Harris and Christine Bowser were residents of the two districts when they sued the state of North Carolina saying state Republicans packed two districts with African American voters and diluted the African American vote in surrounding districts. Gov. Pat McCrory and the North Carolina State Board of Elections were named in the suit. In February, 2016, a lower court ruled in favor of Harris and Bowser and ordered lawmakers to draft a new map.

Republicans argued they were trying to preserve majority-African American districts to avoid running afoul of the Voting Rights Act while also maintaining a 10-3 Republican advantage. In that sense, according to state Republicans’ rationale, the districts weren’t drawn to dilute black votes because the voter was black—they were drawn to concentrate black votes because they tend to vote Democratic. The state petitioned the Supreme Court for a stay in the ruling because the election process had already begun.

The balance between protecting minority voters’ ability to elect candidates of their choice and not using race to create districts is “very, very complicated,” said Justice Samuel Alito Jr., adding that any state legislature that tries to sort this out is extending “an invitation for litigation,” according to the Post.

Representing the minority communities in both cases is Marc Elias, a Democratic lawyer known for his high-profile clients, including Hillary Clinton’s presidential campaign, the Democratic National Committee, and many Democratic members of Congress. He has also been engaged in sometimes controversial work on the voting rights front. In May, Elias successfully defended court-drawn congressional districts in Virginia before the Supreme Court, in a dispute that also involved race-based redrawing of district boundaries. Republicans had challenged a lower court’s ruling that found that state Republicans had diminished black voting power by packing a congressional district, and ordered the lines redrawn. The state Legislature didn’t redraw the map, so the court did, and Elias successfully defended that version of the district map.

The cases will be a test not only of when race-based redistricting goes too far, but also of a potentially deadlocked Supreme Court itself. As SCOTUSblog noted, the court only has eight justices at the moment, and it might be hard to reach a consensus that reconciles conflicting lower-court rulings while also establishing a legal framework for future gerrymandering cases.