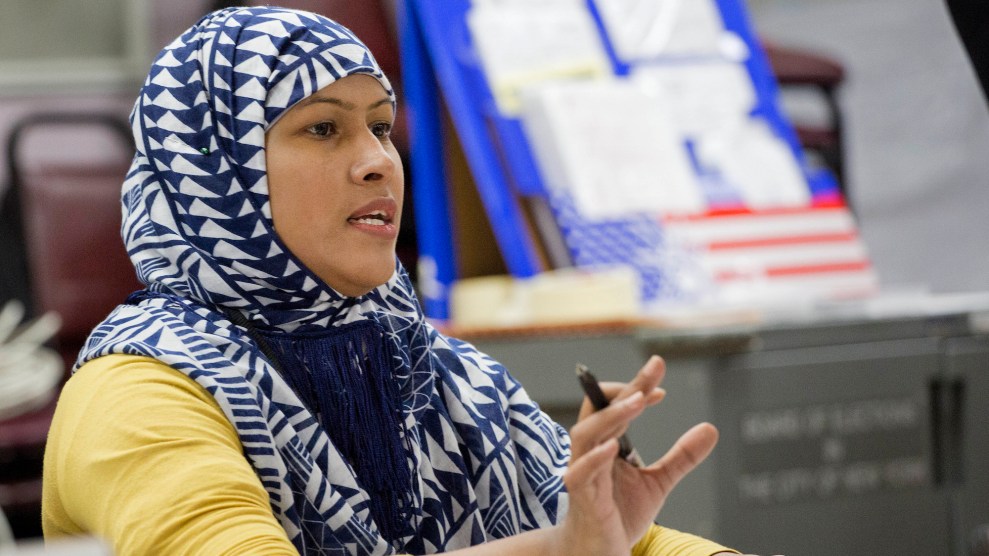 Update: Ron Fox, the man who reported the incident, told Mother Jones that the following day he was informed that the man attempting to direct the women to another polling place was indeed a genuine election official and that the women were legitimately being directed to the proper location.

A man in East Lansing, Michigan, attempted to prevent two women wearing hijabs from voting at their polling place on Tuesday morning in what the county clerk called an act of voter intimidation.

Ron Fox, who was also attempting to vote at East Lansing’s Shaarey Zedek synagogue on Tuesday, described the incident to Mother Jones in an email.

I observed a man just outside the door to the polling place. He pulled two women wearing Hijabs out of line ahead of me. When I came level to him, he was examining their voter registration cards and appeared to be attempting to direct them to another polling place. He seemed polite but I did not like that he’d singled out those two women…When I finished voting, there were two polling officials that were asking him to leave. He was refusing. He then entered the polling place, presumably to attempt to obtain permission to remain.

Fox noted that election officials in Ingham County, where East Lansing is located, wear “identifying stickers,” which the man did not have. “I would say that there was at least some profiling going on as the two women in question were the only ones he singled out while I was in line,” he wrote. He also stressed that the man “seemed polite and non-confrontational.”

Fox’s brother Alan, a member of the Ingham County Board of Canvassers, said the local Democratic Party sent poll watchers to the synagogue following the report. According to Ron Fox, his brother said that “presumably this was to ensure the person in question, or others did not return.” Both Alan Fox and Byrum said they had received no other reports of voter intimidation in the city or county so far on Tuesday.

Update, 6:00 p.m.: Another East Lansing voter, Alan Sorrells, also witnessed the incident and told Mother Jones that the man appeared to be challenging only minorities and asking them where they were registered to vote. “He seemed amiable enough but definitely suspicious,” Sorrells wrote in an email. “His casual approach struck me as though he didn’t want to draw attention to himself. He spoke to certain people as they walked by—but not everyone. An African American man walked by and he specifically asked him ‘which precinct are you registered to vote in.'”

Sorrells also took photos of the man outside the polling station and shared them via his Twitter account.

picture of a guy at my precinct who seemed to be up to no good. My wife alerted election officials #Election2016 pic.twitter.com/XSLmHHWUvx