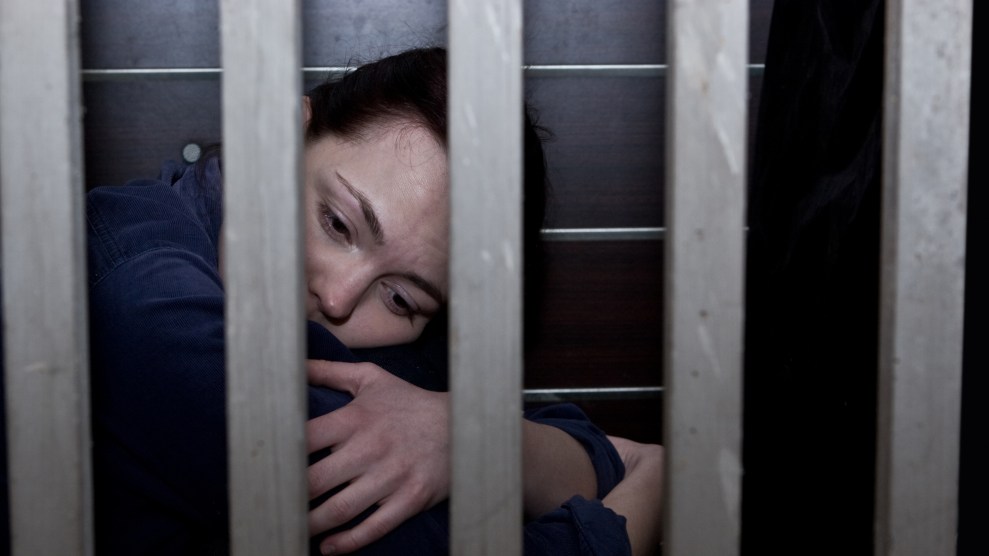 Cleopatra Harrison had large, dark bruises on her neck and scratches on her chest when she met the police at an apartment in Columbus, Georgia, in June. The night before, she told them, her boyfriend had flown into a rage after finding dirty dishes in the kitchen—hurling her to the ground and choking her unconscious. Harrison, 22, agreed to show up in court to testify, but she didn’t want to press charges herself. In response, the Columbus Recorder’s Court fined her $150 and threatened her with jail time if she didn’t pay within a week.

“It’s a holdover from an era in which women were blamed for male violence.”

This “victim assessment fee,” as the judge called it, is mandated by a Columbus city ordinance that requires victims of domestic violence to help law enforcement prosecute their alleged abusers. Now Harrison is suing the city over the policy, which she says punishes victims and is unsupported by Georgia law. It “sounds like something out of the nineteenth century,” her attorney Sarah Geraghty said in a statement after filing the lawsuit in district court earlier this month. “It’s a holdover from an era in which women were blamed for male violence.”

Georgia law allows courts to fine people who falsely and maliciously report a crime. Courts across the country do this regularly. But Geraghty says the city of Columbus and its Recorder’s Court have gone far beyond that, by fining people like Harrison who did not lie in court and may not have even reported the crime in the first place. (In Harrison’s case, a friend called the police on her behalf.) And, Geraghty adds, the court has failed to consider reasons why a victim of domestic violence might not want to press charges—like fear of retaliation by the abusive partner.

The lawsuit alleges that hundreds of people in Columbus, including many assault victims, have been forced to pay this fee, which can range from $50 to several times that amount. One woman was charged $200 after asking for charges to be dropped against her boyfriend, who allegedly beat her over the head with a handgun in May. “There’s no good policy reason to impose this fee,” Geraghty says. An attorney for the city of Columbus was not available to comment on the lawsuit, nor was a spokesperson for the Columbus Recorder’s Court. In a statement sent to Mother Jones, the city said the mayor and all law enforcement “want to insure that all citizens are treated fairly throughout the judicial process and are always concerned about the rights of victims of crimes.”

This isn’t the only recent case that’s called into question policies that critics say punish women who have been victims of domestic violence, assault, or sex crimes. Here’s a rundown of two more controversies:

Oregon: “I get traumatized every day”

What happens when a victim does want to bring charges, but the court worries she won’t show up to testify, perhaps because she appears emotionally unstable or has a history of drug abuse? In rare cases, a court may decide to jail the victim until trial. That’s what happened in August in Washington County, Oregon, after 41-year-old Brandy Buckmaster accused a former prison guard of sexual misconduct. “He manipulated and took advantage of me,” she told the Oregonian.

The court worried Buckmaster might not show up at trial; she had met the guard while she was an inmate, and though she’d finished serving her time, she’d recently violated her parole and tested positive for meth. To make sure she’d testify, the court stuck her back in jail for about 50 days, until trial, while the guard remained out of custody. “I feel like I’m being punished for what he did to me,” Buckmaster told the Guardian during a jailhouse interview, crying. “I get traumatized every day.”

Most states allow judges to detain witnesses who might flee—this is called “material witness detention.” Usually victims are held for less than a week, the Oregonian reports, but Oregon has no limit on the duration of detention in these cases. One material witness in the state was held for 900 days in a murder case before he was released last year. Victims rights advocates warn there are consequences to holding sexual-abuse victims in jail, noting that it can deter other victims from bringing their cases forward. “It has a terrible ripple effect,” says Jessica Mindlin, an Oregon-based attorney at the Victim Rights Law Center.

Earlier this month, Buckmaster was released from jail and the former guard was convicted; he will be sentenced in November. Buckmaster is now reportedly considering whether to pursue a civil case against the Oregon Department of Corrections and Washington County for her time in custody before trial.

Texas: From victim to perpetrator

This summer, a 25-year-old rape victim with bipolar disorder had a mental breakdown on the stand in Harris County, Texas, making national headlines. Prosecutors worried she might not return to court to testify again, so she was jailed for about a month. But the county jail mistakenly admitted the woman as a defendant of sexual assault, rather than a victim, according to a lawsuit filed against the county in June. While she was there, she was allegedly attacked by an inmate and punched in the face by a guard.

“If what you are doing is creating barriers to victims coming forward and seeking help and safety, in the end you’re making your community even more dangerous, not less.”

Harris County District Attorney Devon Anderson defended the decision to jail her: “If nothing was done to prevent the victim from leaving Harris County in the middle of trial, a serial rapist would have gone free—and her life would have been at risk while homeless on the street,” she said in a video statement. “This was an extraordinarily difficult and unusual situation. There were no apparent alternatives that would ensure both the victim’s safety and her appearance in trial.”

But Kim Ogg, a former prosecutor who is running against Anderson for election in November, argued there were other options. “They can be protected by placing them in a hotel, you can place them with family, you can keep in contact,” Ogg said.

It’s rare for assault victims to be jailed as material witnesses, Mindlin says, but “it has happened consistently over the years” in different states, including in California, Washington, and Maine. She recognizes that prosecutors are trying to make sure criminals can be taken to court. But “if what you are doing is creating barriers to victims coming forward and seeking help and safety,” she adds, “in the end all you’re doing is making your community even more dangerous, not less.”