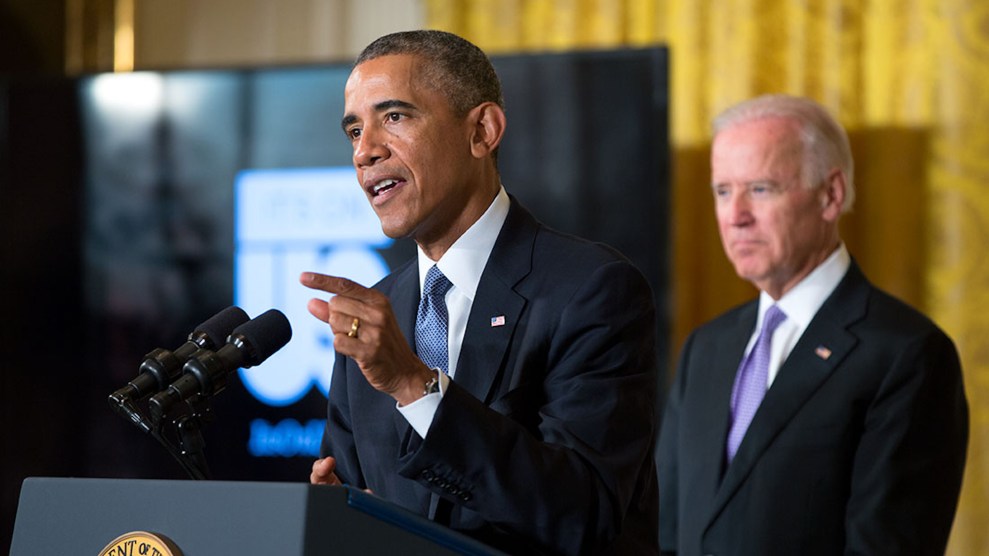 Obama launches the "It's On Us" campaign to raise awareness of campus sexual assault in 2014.Pete Souza/White House

President Barack Obama on Friday signed into law the Sexual Assault Survivors’ Rights Act, a sweeping piece of legislation that guarantees specific rights for people who have been victimized by a sexual assault.

The measure focuses on collecting and preserving rape kits, the forensic evidence collected in a medical examination after a suspected sexual assault. Police enter the DNA collected from rape kits into state and national databases, sometimes identifying and solving other crimes in addition to the initial rape case. Rape kits—more than 100,000 of them, as of 2014—have often languished for years in police warehouses and crime labs, going untested due to a lack of funds and, some argue, contempt for victims. The new law is the first at the federal level to address these problems, protecting survivors’ access to the initial forensic medical examination and instituting measures to ensure evidence of rape is appropriately preserved and tested.

Survivors can no longer be charged fees or prevented from getting a rape kit examination, even if they have not yet decided to file a police report. Once the medical examination is completed, the kits must be preserved, at no cost to the survivor, until the applicable statute of limitations runs out. Survivors will now be able to request that authorities notify them before destroying their rape kits, and they have the right to request that the evidence be preserved. Once the kit is tested, they’ll also have the right to be notified of important results —including a DNA profile match and toxicology report.

Survivors must also be informed of these rights, regardless of whether they decide to pursue legal action against an assailant. The law also creates a task force to examine how well the new regulations work.

The act was spearheaded by Rise, a nonprofit led by Amanda Nguyen, who became an advocate after her rape almost three years ago when she learned that her rape kit would be destroyed by the state of Massachusetts within six months unless she filed repeated “extension requests.”

“The system essentially makes me live my life by date of rape,” Nguyen told the Guardian in February.

Nguyen then contacted Sen. Jeanne Shaheen (D-NH), who began working with her to craft the bill, eventually introducing it in February. “Beginning today, our nation’s laws stand firmly on the side of survivors of sexual assault,” Shaheen said in a statement Friday. “I hope that these basic rights will encourage more survivors to come forward and pursue justice.”

The act passed unanimously in the House last month and by voice vote in the Senate last week. Obama signed the bill on Friday, two weeks after the White House launched a new effort to combat sexual assault for the youngest survivors—those in K-12 schools.