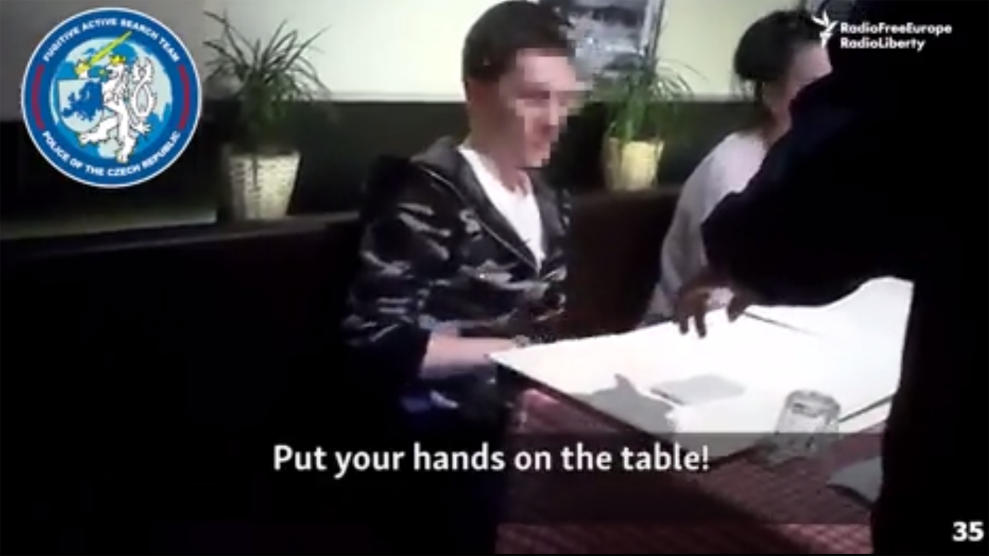 Police in the Czech Republic have announced the arrest of a Russian national suspected of hacking US websites, but the odds are that he’s not connected to the alleged Russian hacks of Democratic organizations and officials in the United States.

The FBI was reportedly part of the operation that captured a man identified as Yevgeniy N. as he sat with his girlfriend in restaurant, located next to the five-star hotel where he was reportedly staying, according to Radio Free Europe. The arrest occurred following the release of a “Red Notice” by the international law enforcement agency Interpol. A “Red Notice” is a request made for cooperation from Interpol member countries that seeks the arrest of a person with the goal of extradition. The man willsoon appear before a Czech judge to determine whether he will be extradited to the United States, according to Reuters.

In a statement provided to Mother Jones, the FBI described the arrest as being of someone “suspected of conducting criminal activities targeting US interests.” The FBI acknowledged that because “cyber crime can originate anywhere in the world, international cooperation is crucial to successfully defeat cyber adversaries.” The recent arrest was an example of the cooperation “between US law enforcement and our international partners.” The agency declined to provide any further details.

Reuters, citing an unnamed “U.S. official,” reported that Yevgeniy N. had been targeted for his alleged role in a hack of social-networking site LinkedIn in 2012 that compromised the login credentials of as many as 100 million of the site’s users, but not as part of the recent spate of hacks that have plagued Democratic organizations and officials in the United States.

“Following the 2012 breach of LinkedIn member information, we have remained actively involved with the FBI’s case to pursue those responsible,” the company wrote in a statement.

The arrest took place on October 5, two days before the United States formally accused Russia’s “senior-most officials” of orchestrating the Guccifer 2.0 hacks of the Democratic National Committee, the Democratic Congressional Campaign Committee, and other Democratic organizations. The Russian government has denied the charge. Congressional Democrats had pushed the White House to formally blame Russia for hacking the DNC and urged some form of retaliation. White House Press Secretary Josh Earnest said October 11 that the United States would deliver a “proportional response” to the hacking, which could include clandestine cyberoperations or economic sanctions against Russian officials.

John Schindler, a conservative former National Security Agency analyst, wrote in the New York Observer Wednesday that “suspicion that this Russian is involved in cyber-espionage against Hillary Clinton and the Democrats is strong, although Western intelligence is being unusually tight-lipped about this case—which is typically an indication that it’s a big deal indeed.”

Meanwhile, Guccifer 2.0, the entity that has claimed responsibility for the DNC hacks (but who is likely a front for Russian interests), is still going strong. On Tuesday, he posted to his WordPress blog documents and email exchanges he claims are from the DNC and the Clinton campaign outlining plans to attack Donald Trump on the issue of his taxes. When he was contacted on Wednesday to comment on the arrest of the Russian national, Guccifer 2.0 responded via Twitter direct message: “why? I don’t live in russia and i’m not russian so i don’t care about that.” Was he worried about getting caught? “i don’t worry coz i think what to do,” he replied.