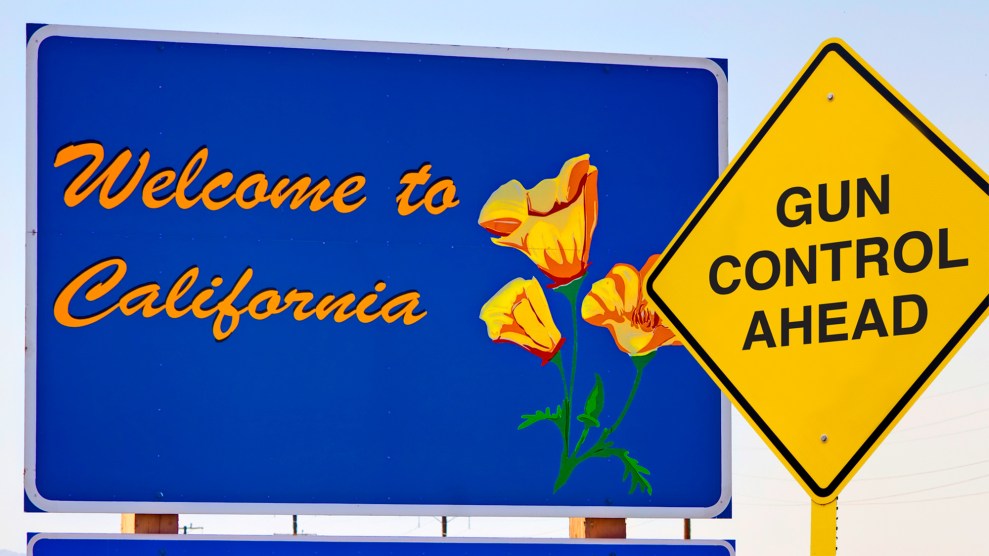 The rates of gun violence in the 10 states with the weakest gun laws are more than three times higher than those in the 10 states with the strongest gun laws. That’s one of the major findings of a new report from the Center for American Progress (CAP) that analyzes 10 indicators of firearm violence—including suicide, murder, fatal gun accidents, and mass shootings—in all 50 states and finds a “strong” correlation between gun violence and weak gun laws.

The states with the highest levels of gun violence include Louisiana, Alaska, Mississippi, West Virginia, and Alabama, which also have some of the weakest gun laws in the nation, according to CAP. States with relatively strict gun laws, such as Connecticut, New York, New Jersey, and Massachusetts, experience significantly lower levels of gun violence. While the report does not assess the impact of specific laws, it does note previous examples of how specific laws have affected gun crime. For example, when Connecticut implemented laws requiring a permit to purchase a gun and mandated background checks, gun-related homicides dropped 40 percent. In contrast, when Missouri eliminated the same requirements, its gun homicide rate increased by 25 percent. 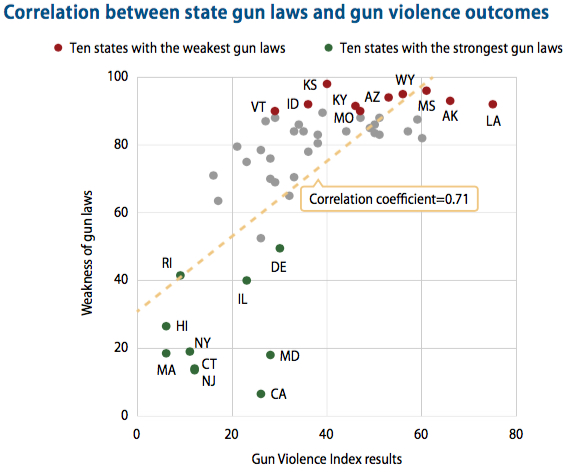 “If you have good gun laws, the people in your state will in fact be safer, and if you have bad gun laws, people in your state—and people in other states—will be at risk,” Connecticut Gov. Dannel Malloy said in a press call about the study. “In many of the cases where violence plays out in Connecticut, we discover that the gun was purchased in a state that had loopholes that we don’t have in our own state.” Since the 2012 Sandy Hook massacre, Connecticut has mandated background checks for all gun sales, required safer gun storage, limited the types of guns that can be sold, and required that all guns in the state be licensed. “In the two completed years that have been analyzed since we passed our updated gun laws, Connecticut has seen the sharpest drop in violent crime of any of the 50 states,” Malloy, a Democrat, said.

Meanwhile, “Florida has taken the exact opposite approach to dealing with gun violence,” said Mayor Andrew Gillum of Tallahassee, Florida. In the same call with reporters, Gillum noted that in response to an attempted mass shooting at a Florida university in 2015, the state Legislature introduced a proposal to allow concealed carry on college campuses. He added that the Legislature and governor “have taken affirmative steps to prevent local governments like mine from trying to take action” to address gun violence.

Under Florida law, local governments cannot regulate the use of weapons. “In my very own city, we have a gun law that says you can’t fire off weapons in city parks where kids play and our families picnic,” Gillum explained. In response, Tallahassee was sued by pro-gun groups including the Second Amendment Foundation and the National Rifle Association, as well as the state’s attorney general. “It’s extremely frustrating to try to work to keep our communities safe in a state when the Legislature is actively working against you and is beholden unfortunately to the powerful gun lobby,” Gillum said.

The new study builds on a growing body of research that has reached the same conclusion: Stricter gun laws are linked to lower rates of gun violence. The NRA has long rejected these findings. Speaking to the New York Times about the new report and those with similar findings that came before it, an NRA spokeswoman claimed the research “cherry picked” evidence. As a counterpoint, she cited the work of the controversial researcher John Lott, whose widely discredited theory is summed up in the title of his best-known book: More Guns, Less Crime.