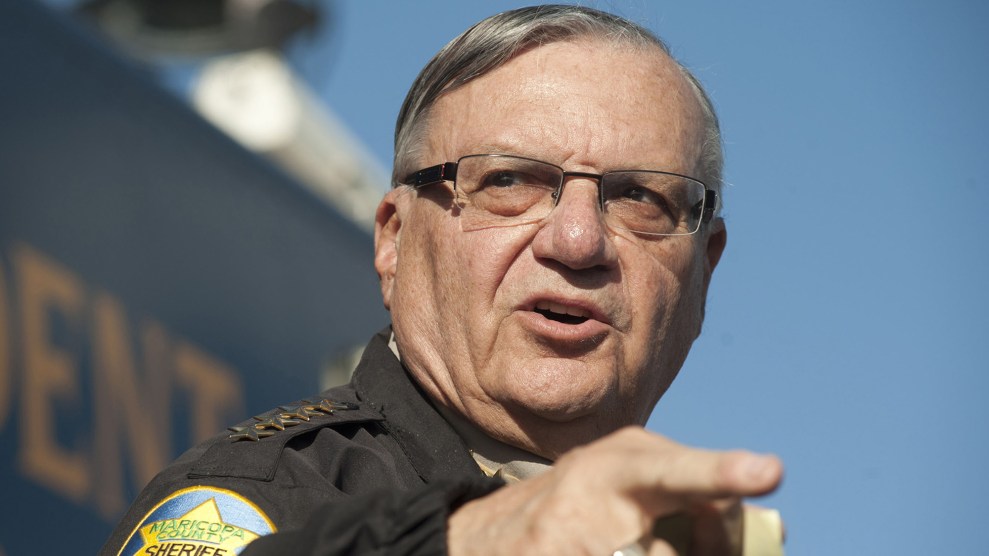 Maricopa County Sheriff Joe Arpaio—famous for his hardline anti-immigration stance, dressing jail inmates in pink underwear, and housing inmates in Korean War tents in the desert heat—will be charged Wednesday with criminal contempt of court by the US Department of Justice for refusing to stop conducting immigration patrols, according to the Associated Press.

“America’s Toughest Sheriff,” already embroiled in a tough reelection fight to win a seventh term, could face trial on December 6, the Arizona Republic reports. The charges stem from a finding by a federal judge that Arpaio and several top aides ignored court orders, lied to the court, and withheld information in a racial profiling case dating back to 2007.  If convicted of a misdemeanor, Arpaio could face up to six months in jail, while a felony-level charge could force him from office, according to the Associated Press.

Mel McDonald, Arpaio’s attorney, told Mother Jones that he’s asked for a jury trial in the case, but that a final decision on it is pending. Also pending is whether the case will be charged at the misdemeanor or felony level, McDonald said.. “We’re going to plead not guilty, and we will fight them in court.”

Department of Justice attorney John Keller said in federal court Tuesday that the DOJ will continue to review evidence for possible charges related to concealing evidence in the case but isn’t yet ready to charge Arpaio, according to the Arizona Republic.

This story has been updated with a response from Mel McDonald, Arpaio’s attorney in the case.