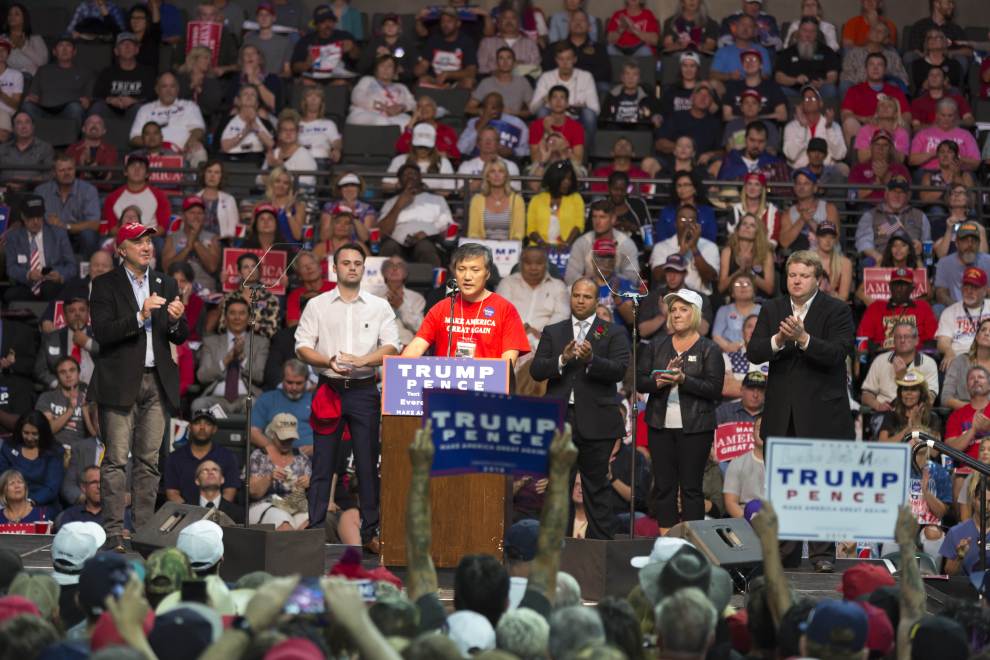 A Trump supporter speaks at a rally in Everett, Washington. Paul Gordon via ZUMA Wire

After several missteps in its attempts to win over black and Latino voters, the Donald Trump campaign is turning its attention to Asian Americans, a rapidly growing demographic that is playing an increasingly important role in presidential elections.

On Sunday, the Trump campaign announced the creation of the Asian Pacific American Advisory Committee, a group of “leaders who will engage Asian Americans and Pacific Islanders (AAPI) on relevant issues.” The committee will focus on building grassroots support for Trump among Asian Americans and will meet with the Republican candidate to share its thoughts on the best ways to promote educational opportunity, fire up the economy, and create jobs.

The committee is co-chaired by Gov. Eddie Calvo of Guam and Gov. Ralph Torres of the Northern Mariana Islands, two Republican-led US territories. Several of the committee members have experience in politics, including Elaine Chao, a former labor secretary under George W. Bush and the first Asian American woman appointed to a presidential cabinet, and Sean Reyes, the current attorney general of Utah. Others, such as Lisa Shin, the founder of Korean Americans for Trump who spoke onstage at July’s Republican National Convention, have worked at the grassroots level to promote Trump within their communities.

“I think the AAPI community has a natural gravitation to Trump’s message,” says Puneet Ahluwalia, an Indian American member of the Virginia Republican Party who will serve on the committee. He says Trump is “a natural leader” whose positions on trade and economic growth match the desires of pro-business immigrants like him.

With six weeks to go before the election, the Asian Pacific American Advisory Committee will have limited time to make an impact. The Hillary Clinton campaign began its Asian American outreach effort during the Democratic primary, and she currently employs two outreach staffers dedicated to the Asian American and Pacific Islander community. Earlier this year, Clinton released a platform focused on the needs of Asian Americans that calls for comprehensive immigration reform, promises to address the family visa backlog, and supports increasing the availability of bilingual poll workers and ballot translation services, whose absence has contributed to lower levels of civic participation among Asian American voters.

It’s likely that Trump’s anti-immigrant rhetoric on the campaign trail has affected his ability to make inroads with Asian Americans. While Trump has focused mostly on undocumented Latinos and Muslim immigrants from the Middle East, Asian immigration has surged in recent years, and Asians are projected to become the largest group of foreign-born residents in the country by 2055. Surveys of Asian American voters have found that anti-immigrant sentiment toward any group affects Asian Americans’ willingness to support a candidate.

The Asian Pacific American Advisory Committee will also have to find a way to work with the Trump campaign, which has struggled to reach nonwhite voters. The campaign’s black outreach effort has been called offensive and out of touch, and earlier this month, several members of the National Hispanic Advisory Council for Trump resigned in frustration after the Republican presidential candidate gave a speech doubling down on his hardline stance on immigration.

But Ahluwalia, who says the Asian Pacific American Advisory Committee is proof that Trump is committed to inclusivity, is optimistic that the group will be able to give the Republican presidential candidate a boost. “I don’t think it’s a publicity effort,” he says. “This committee is going to play a strong role.”