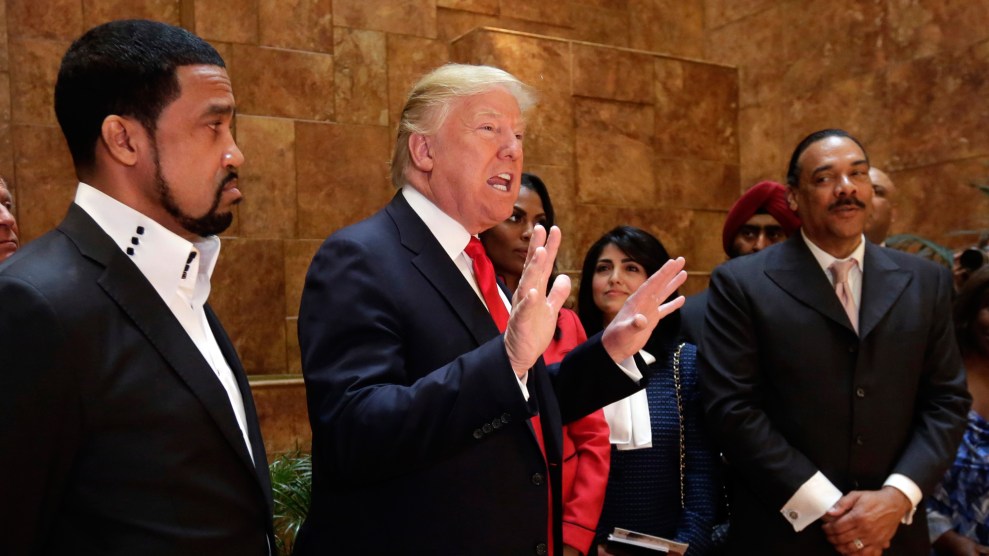 Donald Trump’s visit Saturday to a black church in Detroit appears aimed at boosting his dismal standing among minority voters. But his campaign’s scripted plan for an interview with Bishop Wayne T. Jackson drew criticism from black leaders, and the visit comes amid backlash to the GOP nominee’s latest harsh speech on immigration—including from Trump’s own Hispanic Advisory Council, one of whose members called the speech “a scam.”

To expand Trump’s appeal—perhaps with some white voters, at least—the Trump campaign has relied on a group of advisers from the National Diversity Coalition. Organized earlier this year, and led by Trump’s Apprentice protégé Omarosa Manigault and other Trump surrogates, the coalition posted a list of 55 advisers, most of them African American, Asian American, and Latino, to convey that Trump has attracted a broad base of supporters.

But a closer look at this group reveals at least a half dozen figures who subscribe to a range of conspiracy theories and fringe ideas—including that President Obama is in cahoots with ISIS, that a top Hillary Clinton aide is a Saudi spy, that Clinton supports “genocide of black people through abortion,” and that “Jews are the wealthiest people in the world.”

Late Friday, coalition member Mark Burns—a high-profile African-American pastor who backs Trump and spoke at the GOP national convention—admitted to falsifying parts of his professional biography, reportedly with regard to his college education and military service.

The coalition held its kickoff event in April at Trump Tower. But longtime Trump lawyer Michael Cohen told me in an interview that the coalition is “completely separate” from the campaign, describing it as a “diverse group speaking on behalf of hundreds of thousands of individuals actively endorsing Mr. Trump.” Among the group’s goals, Cohen said, is “to dispel the notion that the mainstream liberal media portrays Mr. Trump as racist.”

Here are some of Trump’s outspoken backers from the coalition:

Dahlys Hamilton, chair of Hispanic Patriots for Trump
Hamilton previously worked outreach for Sen. Ted Cruz in Georgia; she wrote that she abandoned Cruz and became a Trump supporter after realizing that Cruz was a pawn of “globalist puppet masters.”

“Everything we know is a lie,” Hamilton told me in a recent interview. “And Trump knows this. He knows this, and this is why it’s not just the Hillary camp that’s coming against him; the world is coming against him, because they’re all involved.” She says she believes 9/11, the Boston Marathon bombing, and the Sandy Hook massacre were all “false flags.” She says other people won’t speak up about these government deceptions “because, ‘Oh, then I’ll be considered a nut,’ and I’m like, ‘No!’ The whole term ‘conspiracy theorist’ was put in place by our own government after the assassination of JFK to quiet those of us who were speaking the truth.”

The daughter of a Panamanian immigrant, Hamilton describes herself as opposed to “illegals,” saying, “I’m having an issue with having to pay for all their stuff.” She is also wary of allowing “legal Hispanics” into the country, ” she says: “I mean, that takes away our jobs.”  Her group opposes bilingual education, multilingual ballots, and the Dream Act, and supports making English the official language of the United States.

In the wake of the Orlando mass shooting, when Trump implied on Fox News that Obama had ties to ISIS, Hamilton wrote on Facebook, “Trump knows the truth about Hussein. I’ll bet he has the evidence to prove it.” She posted an altered image of Obama depicting him as an ISIS figure, with the comment “Obama De Facto ISIS Commander-in-Chief.” Hamilton also posted an image that read, “Keep Calm and Death To Islam.” She has also praised Trump surrogate Roger Stone’s suggestion that top Hillary Clinton aide Huma Abedin is a Saudi spy. 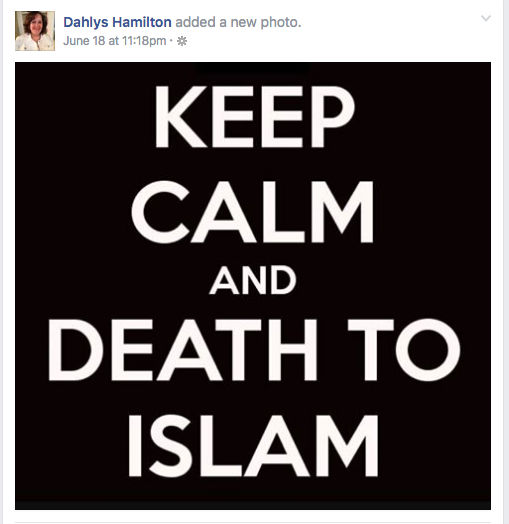 Hamilton says she attended a National Diversity Coalition meeting at Trump Tower, and another with the Republican National Committee in Washington, D.C.  She also says she is helping to organize a fundraiser for Trump’s running mate, Mike Pence, and that her group is planning a meeting in Georgia this month on Trump’s economic policy.

Frances Rice, chair of National Black Republican Association
Rice’s endorsement of Trump back in January made national news, and her talking points from then have underpinned Trump’s “What the hell do they have to lose?” pitch to black voters. As Rice wrote: “Democrats have run black communities for the past 60 years and the socialist policies of the Democrats have turned those communities into economic and social wastelands.”

In 2008, Rice produced a series of anti-Obama radio ads: One implored listeners to “look beyond Barack Obama’s skin color and soaring rhetoric and see an arrogant, elitist millionaire”; others called Obama’s friends “unrepentant terrorists” and called the Democratic Party “racist.” Rice’s magazine, The Black Republican, at various times included articles headlined “Democrats embrace their child molesters” and “Democrats wage war on God,” and featured a photograph of Klansmen burning a cross, with a caption claiming that the people in the photograph were Democrats.

According to an article at the time in the Sarasota Herald-Tribune, the state GOP eventually ended its financial contributions to the National Black Republican Association, as other GOP leaders worried about Rice generating “ill will” toward the party. “If the Democrats had left us alone after the Republicans freed us from slavery we wouldn’t be having this discussion today,” Rice said at the time. “They are keeping blacks in virtual slavery.”

When Trump came under pressure in February to disavow the endorsement of former Klansman David Duke, Rice wrote, “David Duke has never been embraced by the Republican Party and it was Democrats who started the Ku Klux Klan that became the terrorist arm of the Democratic Party.”

Steve Parson, African American pastor for Trump
Parson first endorsed Trump last year and has spoken and prayed at his rallies. At a June 2016 rally in Richmond, Virginia, Parson accused the Democratic Party of playing the “race card,” insisting that Trump “loves all people. He loves African Americans, he loves Latinos, he loves Muslims, he loves everybody. He loves America.”

“Jews are the wealthiest people in the world,” says the Trump backer, “because they have a higher percent of them that are business owners.”

In an interview, Parson said that he supports Trump because the GOP nominee understands how to create wealth in African-American communities by giving people access to trade schools and helping them to start their own businesses: “You know, like the Jews. Jews are taught the skills, craft, trade, and the business from a very young age,” Parson told me. “And that’s why the Jews are the wealthiest people in the world, because they have a higher percent of them that are business owners.”

Corrogan Vaughn, congressional candidate in Maryland
Vaughn, an African-American Republican congressional candidate in Maryland’s 7th congressional district, spoke on Trump’s behalf at a major rally at the Republican National Convention.  He argues that all Americans are “slaves” to the government. “Either by handouts voted on by Constitutional sellouts, or by beating us into submission through socialistic taxation and regulation, we are on their plantation,” he says on his campaign website.

LaNell Babbage-Torres, director of Minorities for Trump
The Twitter feed of Babbage-Torres’s group, Minorities for Trump, includes a stream of retweets calling Hillary Clinton and Barack Obama “traitors” and calling on Trump to “Deport illegals, deport refugees!” Babbage-Torres herself has also called on President Obama to send out the National Guard to protect Trump supporters from violence at his rallies. “During the Civil Rights days of the ’60’s, blacks faced angry crowds much in the same way TRUMP supports are experiencing now,” she wrote on Facebook in June. “There is no difference between TRUMP Supporters and the Civil Rights marchers lead by Dr. King!”

Mark Burns, pastor of Harvest Praise and Worship Center
Burns, the South Carolina pastor and televangelist, became one of Trump’s most visible African-American surrogates when he delivered a benediction in July at the Republican National Convention. Burns has a history of making controversial statements. Last March, he charged that Hillary Clinton is “OK with the genocide of black people through abortion.” He came under fire again in late August for tweeting a cartoon image that showed Clinton in blackface, wearing a T-shirt that read “No hot sauce, no peace!” and holding a sign that said “#@!* the Police.” Burns later deleted the tweet, saying, “I really am a shepherd to God’s people and the last thing I want to do is to offend people.”

(Burns, Rice, Vaughn, and Babbage-Torres did not respond to interview requests. Regarding Burns’ professional biography, a spokesman for the Trump campaign referred to Burns’ statement admitting he had “overstated several details” concerning his background, blaming the media for drawing attention to it, and promising he “will continue to tirelessly support Mr. Trump.”)

This article was reported in partnership with The Investigative Fund at The Nation Institute. Reporting assistance by Kalen Goodluck.