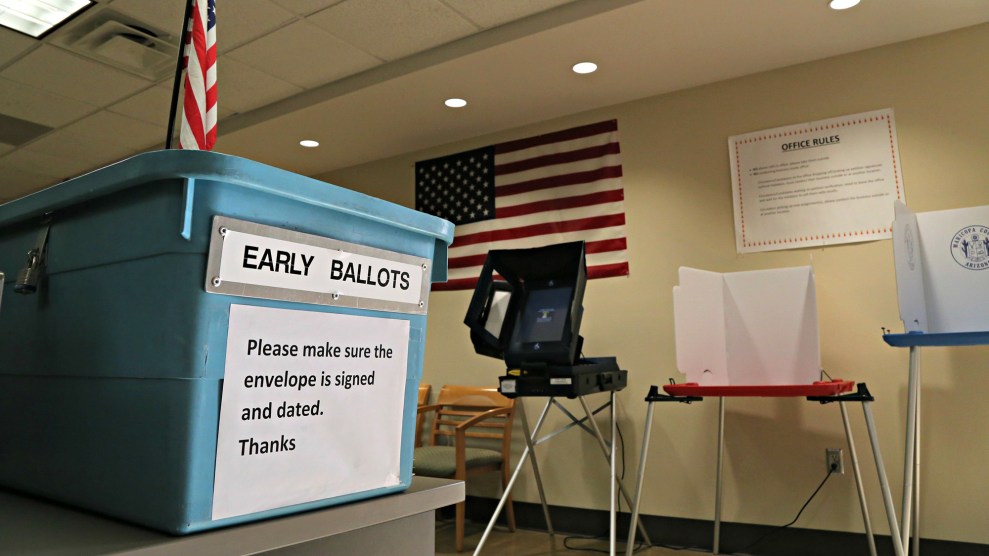 A federal judge denied a Democratic challenge on Friday to Arizona’s ban on collecting other people’s absentee ballots, a move that opponents of the ban fear will suppress the minority vote in the state in the upcoming November elections.

The Arizona Republic reported Friday that US District Court Judge Douglas Rayes ruled that the law didn’t disproportionately impact minority groups. Although it could cause inconvenience for some voters, Rayes found, it didn’t create a significant enough burden to warrant blocking its enforcement during this election. The legal fight over the constitutionality of the law will continue, but the law will not be blocked for the Nov. 8 general election.

The law, Arizona House Bill 2023, targets so-called “ballot harvesting.” It makes it a felony, punishable by up to a year in state prison, for somebody to submit a ballot that isn’t his or hers. Election officials, family members, and caregivers are exempt.

Arizona Republicans have tried for three years to block the ability of people to gather other voters’ absentee ballots and submit them for counting. Republicans have argued that the practice would allow a person to take someone else’s ballot and not turn it in, or to alter it in some way before turning it in, constituting a form of fraud. Arizona Democrats and community activists argued that the practice was common in areas of the state with a substantial minority population, including the Phoenix metro area, and that a ban would be a form of voter suppression. The bill was finally approved this year.

“Voting is a key pillar of our democracy,” said Republican Gov. Doug Ducey when he signed the bill in March. “The bill ensures a chain of custody between the voter and the ballot box.”

State Republicans acknowledged during court arguments in early August that there’s no evidence that a ballot has ever been tampered with or thrown away during the process of ballot collection. But they argued that was irrelevant. “You need not wait until someone breaks into your house before putting a lock on the door,” Arizona Republican Party attorney Sara Jane Agne said during court arguments.