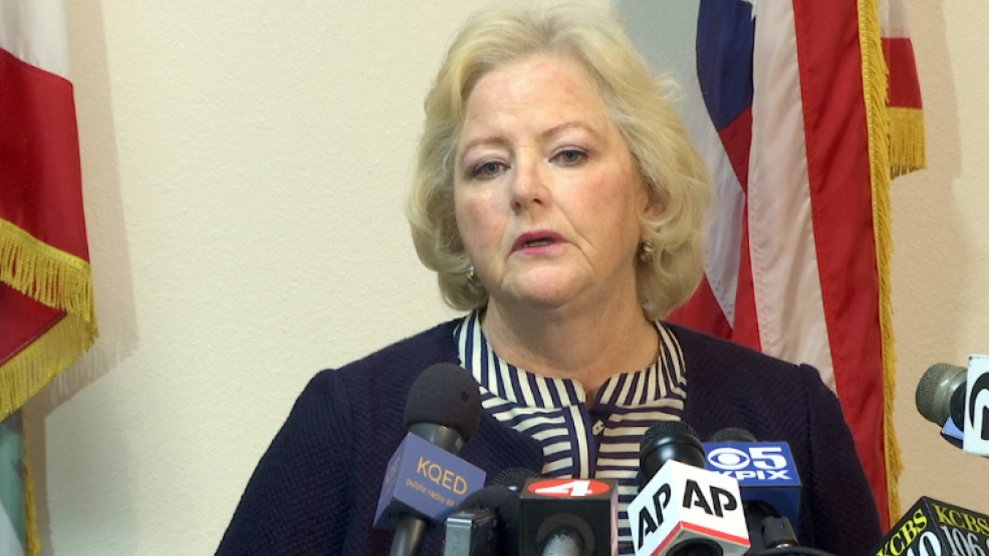 Update: On Tuesday, the Martin County district attorney said that he had offered Guap a plea deal on the lesser charge of misdemeanor battery, and that he expected her criminal case to be resolved “on the quick end of things.”

This past Friday, Nancy O’Malley, the district attorney in Alameda County, California, announced she would pursue charges against seven officers for conduct related to a sex scandal that has been roiling Bay Area law enforcement since March. The announcement came days after Oakland Mayor Libby Schaaf, who has compared the Oakland Police Department to a “frat house,” said she would recommend that the OPD fire one cop (three others have already resigned), suspend seven, and provide training and counseling to yet another. Officers with at least four other Bay Area agencies have been fired or reassigned or have resigned over the scandal, which claimed three successive Oakland police chiefs in just nine days in June. Oh, and one other thing: The victim is AWOL. Here are the dirty details:

1. Crimes: Five current and former Oakland police officers, a former Contra Costa County sheriff’s deputy, and a former Livermore cop are to be charged on 16 counts including oral copulation with a minor and engaging in prostitution—both felonies—and engaging in a lewd act in public. Two cops will be charged with unauthorized use of a police database: Celeste Guap, the 19-year-old at the heart of the scandal, alleged that officers gave her confidential information about her friends’ arrest histories—not to mention money, protection, and information about upcoming prostitution stings—in exchange for sex. Another officer will be charged with failure to report a crime. The DA’s investigation—which included interviews with Guap and various officers, and a review of more than 100,000 pages of social-media posts and text messages—determined that two of the officers not charged with sex crimes did actually have sexual contact with Guap. But because those alleged contacts occurred outside Alameda County, O’Malley’s office has no jurisdiction, she said Friday.

2. Punishments: An investigator with the Alameda County DA’s office who formerly worked for the OPD was fired in July. A Contra Costa County sheriff’s deputy and an officer with the Livermore Police Department resigned earlier this year over their alleged connections with Guap. Two Richmond officers who were determined to have had sex with Guap when she was 18 were reassigned from positions where they regularly interacted with youth. The Livermore Police Department said on Saturday that it had concluded a criminal investigation, but several police agencies are still conducting investigations related to the scandal.

3. Complications: O’Malley’s office can’t formally charge or arrest any of the officers yet, because Guap is no longer in California. She’s in a Florida jail cell. Late last month, the alleged victim checked into a Stuart, Florida, sex- and drug-addiction program. Three days later, according to the East Bay Express, the local weekly that broke the scandal, Guap allegedly bit a security guard and was arrested, charged with aggravated battery, and jailed—bail was set at $300,000. The Richmond Police Department used victim’s compensation funds to help pay for Guap’s rehab—the Contra Costa County DA’s office told the Express that it helped process the application for the funds. Guap’s mother and attorney Pamela Price, who represents Guap, suspect a cover-up of some kind: They questioned why Guap wasn’t placed in a local program instead. This latest news has renewed calls by local activists for federal or state authorities to launch an independent investigation. On Friday, O’Malley said the Richmond police did not consult her before paying for Guap’s trip to Florida, and that she would not have approved such a trip. She can understand the public outcry over the decision, she added. The Martin County DA is expected to decide this week whether to pursue the charges against Guap.