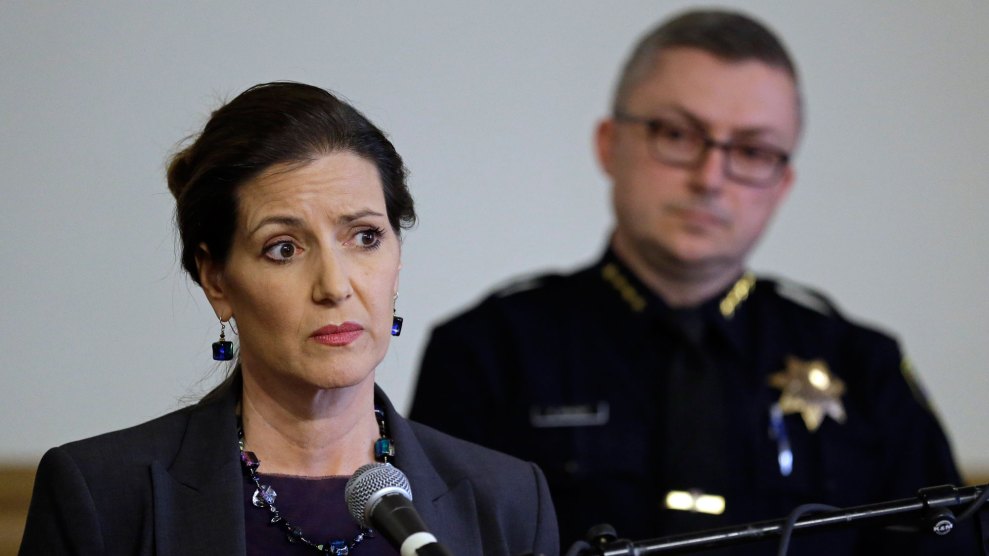 Seven Bay Area activist organizations held a press conference in front of the Oakland Police Department’s downtown headquarters on Tuesday morning, calling for the resignation of Mayor Libby Schaaf in the face of a sex scandal (and others) that has claimed three acting police chiefs in less than two weeks. The groups, which included Black Lives Matter’s regional chapter and an organization called the Anti Police Terror Project, called for an outside agency—APTP’s founder suggested the Department of Justice—to conduct an investigation. 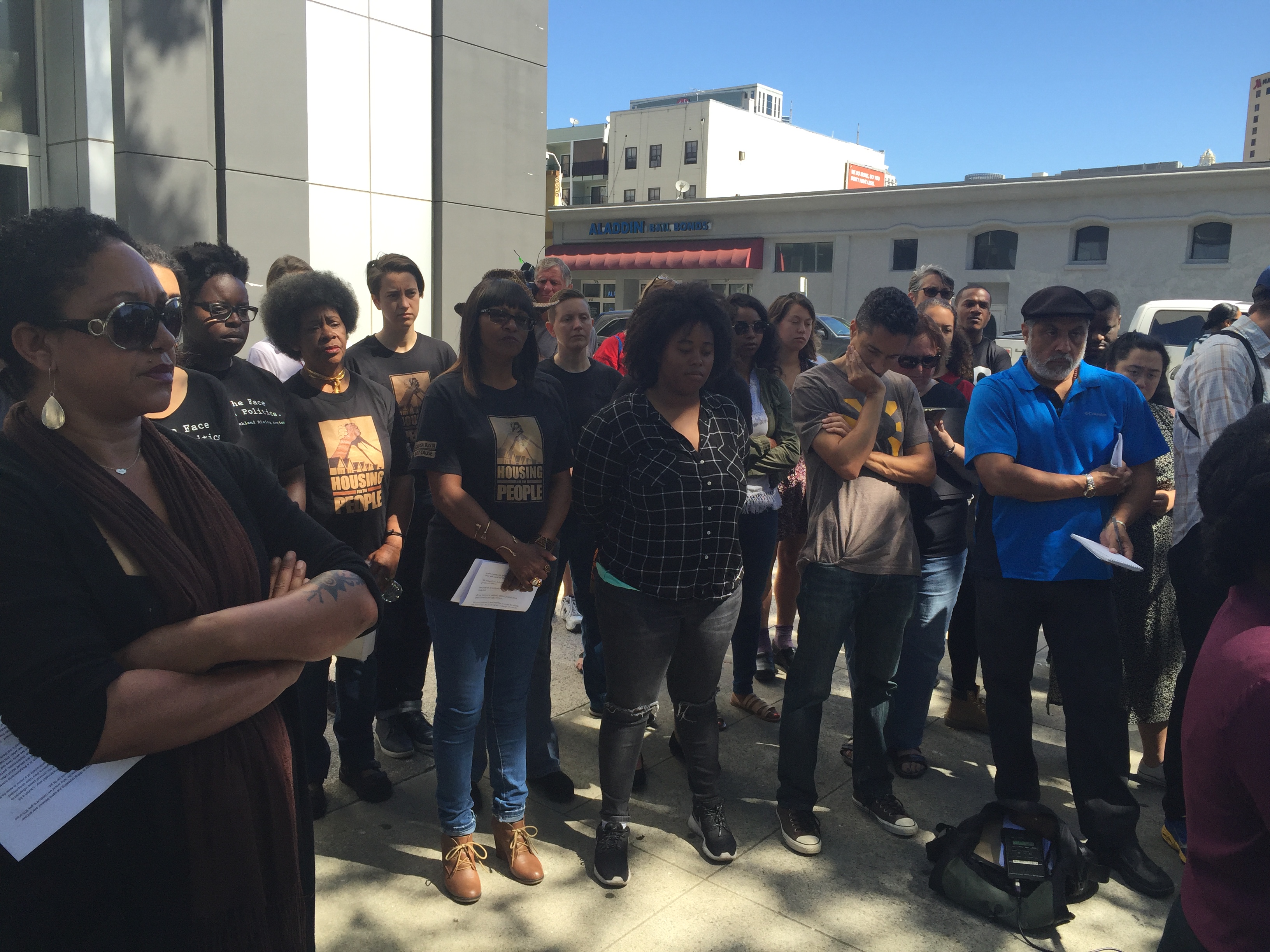 The sex scandal, triggered by an officer’s suicide, broke as the OPD was looking to end 13 years of federal monitoring, the result of past misconduct by a pack of rogue Oakland officers who called themselves the “riders.” The department is also looking into claims that a married homicide detective let his mistress write his criminal reports, and incidents of racist texts exchanged between officers. After the resignation of three police chiefs in succession, Mayor Schaaf has put the department under the control of City Manager Sabrina Landreth. In an earlier press conference, Schaaf compared the department to a “frat house” with a “disgusting” and “toxic macho culture.” Here are some of the highlights—or more accurately, lowlights of the ongoing OPD crisis.

1. Officers may have committed statutory rape: At least 14 Oakland officers are under investigation for having sex with an 18-year-old sex worker—three of them allegedly had sex with her when she was 17. The woman, who goes by the name Celeste Guap and is the daughter of police dispatchers, claims she slept with the officers in exchange for money and protection—and told reporters that they shared with her confidential information about her friend’s arrest history and undercover prostitution stings.

2. Numerous agencies are implicated: Guap alleges that she also had sex with three Richmond police officers, four Alameda County sheriff’s deputies, officers with the Livermore police departments and the Contra Costa County sheriff’s department, and a federal officer for a total 28 officers. She met the first officer, Brendan O’Brien, when she ran to his car for help as she was chased down the street by a pimp in early 2015. They began “dating” and having sex—Guap was 17 at the time, according to the local weekly East Bay Express, which has reported extensively on the scandal. O’Brien allegedly introduced her to two other officers, and she met other police through social media and referrals from cops she’d slept with. Under California law, any adult who had sex with a 17-year-old may be charged with rape, and anyone who referred Guap to others for sex could potentially be accused of human trafficking. The Richmond police department and Alameda County district attorney’s office are also investigating.

3. OPD chief allegedly looked the other way: On June 9, Libby Schaaf announced that Oakland Police Chief Sean Whent had resigned for “personal reasons.” But the Express, relying on police sources, revealed that Whent was actually fired for mishandling the sexual misconduct investigation. According to the Express, Whent’s wife had communicated with Guap on Facebook, and both she and Whent knew that Oakland officers were having sex with Guap months before the OPD’s internal affairs division opened an investigation—but took no action. When Oakland federal monitor Robert Warshaw caught wind of this back in March, he ordered the officers investigating the case to report directly to him, and not Whent.

4. Questions in death of officer’s wife: The sex-scandal investigation was sparked by a note left behind by officer O’Brien last September after he committed suicide. O’Brien was questioned briefly during a 2014 investigation into his wife’s death, which was ruled a suicide. The coroner’s report called it “suspicious,” however, and the woman’s family said they believed O’Brien killed her, according to the Express.

5. Three chiefs in nine days: Following Whent’s departure, Schaaf appointed Ben Fairow as acting chief. She fired him six days later, saying she’d received information that caused her to lose confidence in Fairow’s ability to lead the OPD, and that she hadn’t properly vetted him. The San Jose Mercury News reported, based on multiple sources, that Fairow had inappropriate sexual contact with another officer during a past stint with the OPD. In Fairow’s place, Schaaf appointed Paul Figueroa. Two days later he took a voluntary leave of absence, saying he could not “fulfill the functions” of the job. Two rank-and-file Oakland officers have resigned, and three others have been put on leave—as was a former Oakland officer, now a detective for the Alameda County DA’s office, who allegedly had sex with Guap while she was underage.

6. Oakland’s latest top cop also has issues: Schaaf says she won’t appoint a new chief until the city conducts a national search for a replacement. But on Friday, Figueroa appointed deputy chief David Downing to the position of acting assistant chief before taking leave, which makes him the city’s new top cop. Downing may have issues of his own, however. According to Claycord, a local news outlet, he was forced out of his previous job, as a captain with the nearby Concord Police Department, after less than a year because his “military style of leadership didn’t sit well with most of the department.” And KRON4 news reported that multiple police sources said they heard Downing make racially insensitive comments about hosing down protesters on more than one occasion—which is troubling given that the department is under federal scrutiny due to the bad behavior of racist officers.

Correction: The Stockton Police Department was not among the departments whose officers were implicated in the scandal. In addition, it was then interim chief Paul Figueroa, not Mayor Libby Shaaf, who appointed David Downing acting assistant chief.