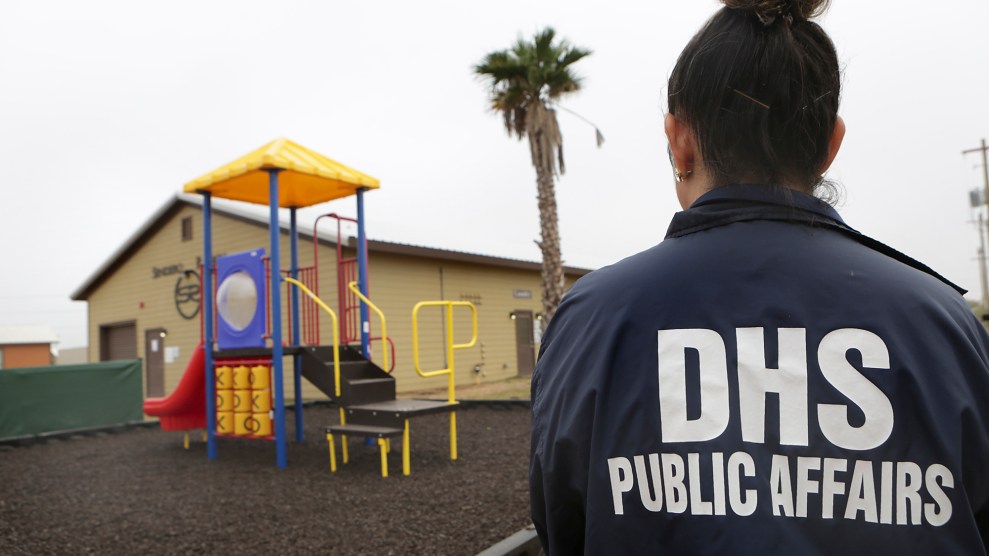 Update (8/25/2016): On Tuesday, August 23, the mothers announced that they would suspend their hunger strike, citing intimidation from immigration officials. The women say they will resume the strike within a week if they are not released.

Nearly two dozen migrant women at a family detention center outside Philadelphia have been on hunger strike for more than a week to protest their extended confinement—and, more broadly, what they claim is the Obama administration’s mischaracterization of the detention of Central American families.

Earlier this month, Homeland Security Secretary Jeh Johnson said DHS has been detaining families for an average of no more than 20 days. This directly contradicted the experience of the hunger strikers, who say they have been held with their children in the Berks County Residential Center for between six months and a year while awaiting their asylum claims to be appealed. So on August 8, 22 women began refusing all food and drinking only water, and two days later they sent a letter to Johnson asking to be released while they wait for their claims to be heard.

“All of us left our countries of origin fleeing violence, threats and corruption,” they wrote. “We are desperate and we have decided that we will get out alive or dead.”

Bridget Cambria, one of the attorneys representing the women, says most of them have lost between 6 and 10 pounds over the last 11 days. An Immigration and Customs Enforcement spokesman said the agency fully respects the hunger strikers’ right to express their opinions and said health personnel are actively monitoring their well-being. The spokesman also said ICE only recognizes 18 hunger strikers; previously, it acknowledged just four. (Last year, a wave of similar hunger strikes took hold at immigration detention centers across the country—including at one family detention center in Karnes City, Texas.)

“We are desperate and we have decided that we will get out alive or dead.”

The Berks County Residential Center is the smallest of three family detention centers in the United States. It currently houses 75 detainees, 34 of whom are adult women. The country’s other two (much larger) family detention centers are located in Texas. In 2014, when increasing volatility in Central America led to a surge in women and children fleeing for the US border, the Obama administration responded by increasing the federal government’s capacity to detain families.

However, those detention centers soon came under scrutiny for poor medical care, allegations of sexual abuse, lack of access to counsel, and unaffordable bonds that make it difficult, if not impossible, for families to obtain their release. Last summer, Johnson announced a series of family detention reforms meant to reduce the length of confinement, including setting bonds at a more realistic level. The following month, a district court in California ruled that the government must release migrant children within three to five days, or within 20 days under extreme circumstances. Otherwise, the court said, the administration would be in violation of an 18-year-old court settlement dictating the proper treatment of migrant children in detention.

Earlier this month, Johnson told reporters that the government is in compliance with those standards, having limited the average length of stay at family detention centers to 20 days or less. But advocates point to the prolonged detention of children in Berks as a clear violation. “It’s 100 percent violating the settlement,” Cambria said. “There is a right for the children to be released. I don’t even get it. I don’t…We should be caring for the best interests of the child.”

One detained girl said the thought of leaving her mother even briefly in the middle of the night filled her with so much fear that she often wouldn’t make the trip to the bathroom.

In their letter to Johnson, the hunger strikers stressed their concern for their children’s mental health. They said their sons and daughters have even expressed suicidal thoughts. Human Rights First, which has been making periodic visits to the Berks facility, issued a new report Friday documenting the poor state of mental health at the facility. For example, the report claims that one preteen girl wet the bed so frequently that she had to wear diapers at night. An independent psychological evaluation determined that she had symptoms of post-traumatic stress disorder and that her bed-wetting, though it started well before her incarceration, was “exacerbated by [her] continued experience of heightened stress and hypervigilance while being detained.” The girl told her therapist that the thought of leaving her mother even briefly in the middle of the night filled her with so much fear that she often wouldn’t make the trip to the bathroom.

Numerous studies have shown that even short periods of detention can affect children’s mental and physical health. In a letter to Johnson in July 2015, the American Academy of Pediatrics warned that incarcerating Central American families could lead to “poorer health outcomes, higher rates of psychological distress, and suicidality.”

The ICE spokesman said he is prohibited from commenting on specific cases for privacy reasons but noted that the agency takes these allegations seriously and will review them. He also emphasized that comprehensive medical care, including from licensed mental-health providers, is available throughout a migrant’s detention, along with 24-hour emergency care.

Cambria and other immigrants’ rights advocates say families seeking asylum shouldn’t be detained at all, let alone for months at a time. They would rather see women transferred out of detention into the care of their relatives in the United States or community-based programs while their asylum cases are processed.