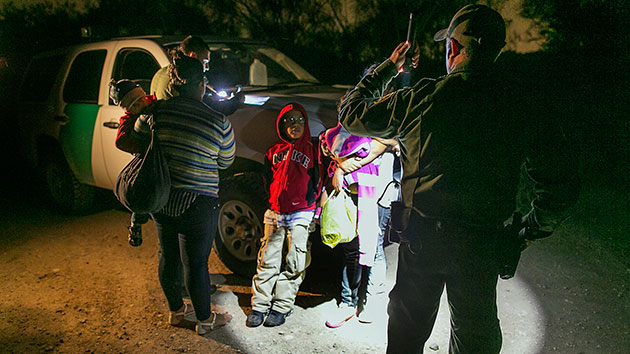 Last month, while conservatives went into panic mode over those eight Syrians who crossed the US-Mexico border shortly after the Paris attacks, the feds were scrambling to keep up with a more familiar sight in South Texas: the arrival of unaccompanied children and families from Central America.

In October and November, nearly 10,600 kids traveling by themselves were apprehended at the border, more than twice as many as during the same period in 2014—and roughly the same number apprehended at the height of last year’s surge, in June 2014. Another 12,500 people traveling as families were caught, a 176 percent jump from October-November 2014. The vast majority came from Central America’s so-called Northern Triangle—El Salvador, Guatemala, and Honduras—which continues to be the site of extreme violence, poverty, and, lately, drought.

The spike in apprehensions was surprising for a couple of reasons: First, the numbers of both unaccompanied children and family unit apprehensions have dropped steadily over the past year, and second, the fall and winter months are often quiet ones at the border.

To get a better sense of what’s going on right now, I spoke with Jennifer Podkul, a senior program officer at the Women’s Refugee Commission who has been tracking the issue since 2011. Here’s are five takeaways from our interview:

1. Things haven’t changed much in Central America, but they have in Mexico. “All of our partners in Central America said the same number of kids and families are leaving—it’s just who’s getting to the border,” Podkul says. “I think that’s a result of Mexico really clamping down on enforcement and stopping La Bestia, and then the smugglers figuring out how to get around that and continuing the flow of people…I think that when there was an immediate clampdown on the Mexican side, it slowed the numbers of who was coming to our border. Or it’s taking people a lot longer than it used to, so you may have somebody who has been en route for a very long time because they’ve been deported once or twice from Mexico already.”

Honduran authorities “stop them and say, ‘You don’t have the necessary documents to leave the country. Turn around.’ Well, turn around into what?”

2. The number of unaccompanied Honduran kids at the US border has dropped—and that’s troubling. “Anything you read or see or talk to anyone about Honduras, it’s only getting worse there. It’s not getting better. But the numbers are going down. Honduras has spent a lot of time and money monitoring their own border and stopping kids from leaving Honduras, and I think we’re seeing that now with the lower number of Honduran kids coming here. They’re saying a child can’t leave the country without permission from both parents—that’s a child-protection mechanism. You don’t want children leaving on their own, or without their parents knowing about it…They’re stopping kids from leaving, but there’s no plan for what to do with them. They stop them and say, ‘You don’t have the necessary documents to leave the country. Turn around.’ Well, turn around into what? There’s no child-protection system that’s working that’s really going to work for these kids.”

3. Families are getting split up when they’re picked up. “You have siblings who are getting separated, married couples that are getting separated, and that can be because just the mechanics of what happened during detention—one Border Patrol agent maybe got one person, one got another; they were separated by gender in the holding cells; they may have been separated by the coyotes and they crossed five minutes apart; one got apprehended and one didn’t. What we’re worried about is when they’re coming into the system and they’re getting maliciously separated or no one ever realizes that these people are together. And it’s very important, because it might be that one person may be carrying all of the documents or all of the evidence for their legal case. Or one person’s legal case really hinges on being the family member of somebody else, so they need to join the cases together.”

4. The feds are opening more temporary facilities for kids. They’re also letting them out quicker. “The Department of Health and Human Services wants to shelter up to 9,800 kids right now. They’re at 8,400 since November. They have two camps that they’ve contracted with in Texas right now for up to 1,000 kids. And they have an agreement with the Department of Defense that they would put them on notice, so every 30 days they can request to have beds online in case they need them. But they haven’t had to use any yet.

“I think you can make the direct comparison to the situation in Europe. There’s nothing about the Swedish asylum process that is causing a surge of Syrians to flee Syria.”

“What they also do simultaneously when they up their capacity is speed the process in which they reunify children—so they get children out of their custody more quickly, so they have more beds available for more kids who are coming. Initially, that looks really good, right? We don’t want kids in detention; we think it’s good to get them out. But with kids you have to be very careful, because there’s a delicate balance between detaining them unnecessarily and turning them out to any adult who comes forward, saying, ‘Yeah, I’ll take that kid.'”

5. We can learn from what’s been going on in Europe. “There’s nothing about the Swedish asylum process that is causing a surge of Syrians to flee Syria. You have to look at what’s happening in the home country and why people are leaving, and it has nothing to do with whether or not Sweden has a functioning asylum system that they can properly adjudicate cases. And even though we now have thousands of beds in family detention facilities, where somebody knows they’re going to get locked in jail with their baby, they’re still coming. That hasn’t worked as a deterrent…

“Framing it in this comparison to the European context is generally helpful in that people will really start to see this as a true refugee situation. Because I feel like they don’t. It’s like, ‘Migrants from Central America are economic migrants coming here to steal jobs, but Syrians are real refugees and Europe should take them.’ Breaking down those barriers is helpful.”