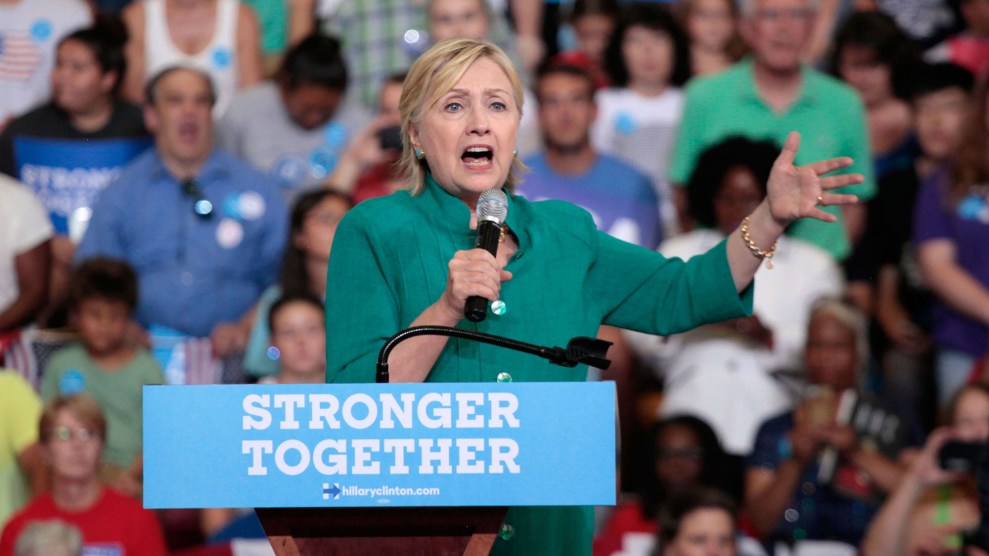 Three days after Donald Trump delivered an economic policy speech in Detroit, Hillary Clinton gave her own economic address Thursday in the nearby suburb of Warren—and used it as an opportunity to roast her opponent. “There’s a myth out there that he’ll stick it to the rich and powerful because, at heart, he’s really on the side of the little guy,” Clinton said of Trump. “Don’t believe it.”

Billed as an unveiling of her economic plan, Clinton’s speech was mostly a retread of a laundry list of ideas that she has previously put forward. After a long, detail-orientated primary campaign, Clinton has already presented a vision for the sort of legislation she’d like to see Congress pass if she’s elected to the White House. Among the litany of things she’d like to pass: a public option for health insurance, a minimum wage hike*, paid family leave, a package of measures to allow students to graduate from college debt-free, and a $25 billion infrastructure bank, along with a massive injection of direct government spending on infrastructure projects such as an expansion of broadband access and an upgrade to the electric grid. Many of these proposals are unlikely to make it through Congress, particularly if Republicans retain control of the House of Representatives.

Clinton used her speech to emphasize one point that Trump regularly uses to criticize her: trade deals. She reaffirmed her opposition to the Trans-Pacific Partnership, saying that it’s not just a campaign ploy but a stance she’ll maintain in the White House. “I will stop any trade deal that kills jobs or holds down wages, including the Trans-Pacific Partnership,” she promised.

Clinton said Trump’s recent proposals would benefit the country’s wealthiest echelon, of which Trump is a member, rather than the working class whose interests he claims to be protecting. She pointed out that, as independent researchers have shown, Trump’s across-the-board income tax reduction would benefit mostly the top earners, especially with a carve-out that would allow business owners to pay taxes at Trump’s new, low corporate tax rate of 15 percent. Clinton also noted that because Trump’s new child-care proposal is to offer tax deductions instead of tax credits, its benefits would likewise skew toward the well-off while not doing much to make child care cheaper for lower- and middle-class families.

Trump’s call to erase the estate tax, she said, is a clear-cut handout to the rich, since the tax applies only to inheritances of more than $5 million per individual and affects just 0.2 percent of all estates. “If you believe that he’s as wealthy as he says, that alone would save the Trump family $4 billion,” Clinton said.

When talking about the economy, Clinton walks a fine line. Faced with Trump’s pessimism about the state of the country, she often tries to talk up the state of the economy under a president whose administration she served in for four years. But at the same time, she cautions that the post-crash recovery hasn’t been equally distributed. “There is too much inequality, too little upward mobility,” she said on Thursday. “It is just too hard to get ahead today.”

Correction: An earlier version of this article inaccurately described Clinton’s plans on raising the minimum wage.