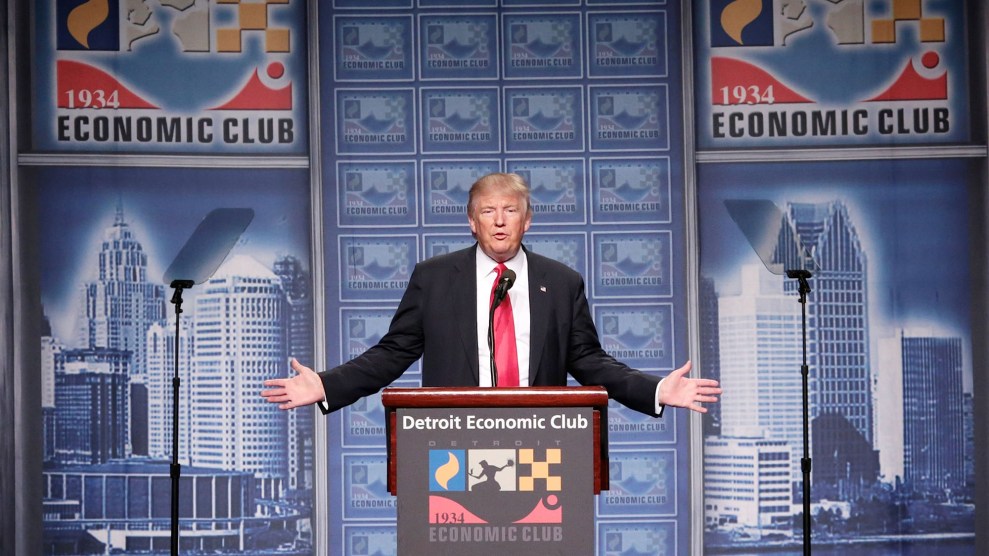 If the federal government hadn’t bailed out the auto industry in 2009, the state of Michigan—where Donald Trump spoke about his economic plans Monday—could have lost 338,000 jobs over two years. On Friday, the Republican nominee will be in Pennsylvania, a state that could have lost 49,000 jobs. That’s according to a 2009 analysis by the Center for Automotive Research of the worst-case scenario for Chrysler and General Motors. Trump’s running mate, Indiana Gov. Mike Pence, appeared on Wednesday in Ohio, which could have lost 201,000 jobs. And Pence is speaking Thursday in Wisconsin, where 44,000 people could have been put out of work.

But as they campaign in the Midwest, Trump and Pence could be undercut by their criticism of that bailout. Pence was firmly against it, and Trump, despite his customary rhetorical whirligigging that makes it impossible to pin down his actual stance, has made clear that he was not a fan of how President Barack Obama handled the situation.

While controversial at the time, Obama’s decision to inject $57 billion to save GM and Chrysler has generally been seen as a success. The Big Three American car manufactures rebounded, and the government has earned back about $70 billion of the $80 billion given to the industry by Obama and his predecessor George W. Bush. (Ford didn’t receive federal funding, but the company advocated the bailout because the failure of its two competitors would have shut down parts suppliers used by all the companies.)

In the early days of the economic crisis, Trump sounded supportive of government assistance for the car industry. “I think the government should stand behind them 100 percent,” he said on Fox News in 2008, during Bush’s presidency. “You cannot lose the auto companies. They’re great. They make wonderful products.” But Trump changed his tune after a Democratic president stepped in to help the auto industry.

In 2012, Trump took to his favorite platform to go after the auto bailout, tweeting, “Obama is a terrible negotiator. He bails out Chrysler and now Chrysler wants to send all Jeep manufacturing to China—and will!” While Chrysler did start manufacturing Jeeps in China again, that was to sell them in the country and avoid tariffs there. The company was expanding Jeep production domestically at the same time. That didn’t convince Trump, though, who claimed it was all part of a pro-Obama conspiracy.

Don’t believe Chrysler (if Obama wins)–see how fast @Jeep production will be moved to China–and I’ll be watching!

Now that the election is over, watch Chrysler ship @Jeep production to China–my prediction.

Trump hasn’t backed away from his criticism of the auto bailout during the current campaign. At a press conference in Michigan last fall, Trump said that things would have worked out just fine if Obama had let GM and Chrysler enter bankruptcy without government assistance. “You could have let it go, and rebuilt itself [sic], through the free enterprise system,” Trump said. “You could have let it go bankrupt, frankly, and rebuilt itself, and a lot of people felt it should happen. Or you could have done it the way it went. I could have done it either way. Either way would have been acceptable. I think you would have wound up in the same place.”

The people who oversaw the president’s auto program aren’t buying that argument. “So much of what Trump says is so convoluted and lacking in substantive knowledge,” says Steve Rattner, who led Obama’s 2009 task force on the bailout as the so-called car czar. Trump’s implication that the industry would have rebounded just the same whether or not the government had intervened is particularly troubling to Rattner. “There were no credit markets that were functioning,” he says. “In an absence of help form the government, the companies would have just closed their doors.”

That assessment is backed up by a 2011 report from the Congressional Oversight Panel, a bipartisan committee created in 2008 to review the Treasury Department’s efforts to save the financial industry following the Wall Street crash. “There is little doubt that in the absence of massive government assistance, GM, Chrysler, and GMAC/Ally Financial faced the prospect of bankruptcies and potential liquidation, given the apparent dearth of available financing from the private sector,” the report stated. “In the context of a fragile economy and the financial crisis (which severely restricted both corporate and consumer credit), the failure of these companies could have had significant near-term consequences in terms of job losses and the performance of the broader US economy.”

Pence has been more consistent in his opinion on the auto bailout: It was a terrible idea all along, whether it was Bush or Obama attempting to help the industry. “I even opposed bailing out GM and Chrysler,” Pence said in a 2010 speech in Detroit. “I welcome the rebound of that company with an open heart, but I still think that most Americans know that it would have still been better for GM and for the country if GM had been allowed to go through normal bankruptcy proceedings.”

With his campaign struggling and his rhetoric having turned off many Latinos and other voters, Trump will need the support of white working-class voters in the Rust Belt, including some who have traditionally voted Democratic. But much of his rhetoric seems unlikely to appeal to manufacturing workers in the region, where the auto industry plays an outsize role. Last August, he suggested that the key to preventing auto companies from shipping jobs overseas is to instead move production to states with lower wages than Michigan—in an effort to drive down the cost of labor. “You can go to different parts of the United States and then ultimately you’d do full-circle,” Trump told the Detroit News. “You’ll come back to Michigan because those guys are going to want their jobs back even if it is less.”